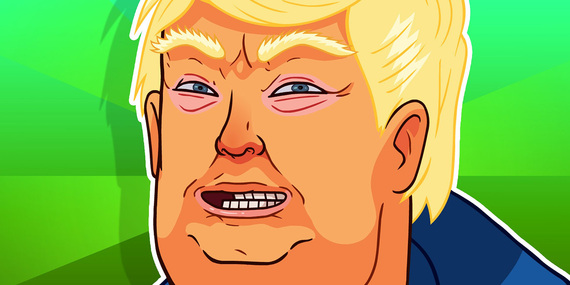 So, a good liberal is definitely not supposed to agree with Trump. That's like the number one rule of being liberal. I just couldn't help it, though. Don't get me wrong -- I don't endorse the Donald. His racism, sexism, and every other -ism one can attach to his campaign are a serious issue and they're more than enough to prevent me from supporting him. But that doesn't mean I don't agree on some things.

Healthcare Transparency: Why am I paying thousands of dollars for a 10-minute ride in an ambulance? Why does my Ibuprofen pill cost $20 when I can buy it at Walmart for $2? I have so many questions about health care cost, but no one seems to have the answers. We need to demand answers, and Trump's plan to increase transparency does that.

Allow Pharmaceutical Drug Imports: What if I need a drug that's not sold in the United States? What if the drug I need is much less expensive somewhere else in the world? Importing drugs increases options and decreases price for consumers, so it's a win-win.

Tax Corporate Income Earned Abroad: American companies should not be able to defer taxes no matter where they make their money.

Stop Supporting Chinese Businesses with Lax Labor and Environmental Standards: This problem isn't unique to China, so I wish he'd apply this to all businesses, but it's an ethical way to bring jobs back to America and raise standards for the businesses we work with. It also equalizes the playing field of business competition by ensuring all companies that want to be players in the global market meet the same conditions.

Female Veteran Health: Trump is the last candidate I expected this from, but he argues that the Veterans Administration should meet women's health care needs. From his website: "The fact that many VA hospitals don't permanently staff OBGYN doctors shows an utter lack of respect for the growing number female veterans."

Veteran Mental Health: The VA needs to do that too. This includes funding PTSD, traumatic brain injury, and suicide prevention resources.

Veteran Healthcare: Under Trump's plan, veterans would be able to use their Veteran ID to go to any healthcare provider that accepts Medicare.

So no, Trump isn't who I'll be voting for. He's not who I'm supporting. He's mocked a disabled voter, supported a Muslim database (let's not forget how the Holocaust started), and called public breastfeeding "disgusting." None of that is excusable and nothing he said or did would change that. But as for his actual policies? They don't seem all that bad.

Except for his immigration policy. That one's bad. Notice the lack of mention above. No Trump, Mexico should not pay for a wall.

If Left Wing the New Black?

The 5 Stages of Caring About Politics in College