After my son submitted his college applications a few weeks ago, he confessed not getting into his top choice school would be the "ultimate dreamcrusher." That aptly sums up the dread I started to feel following last week's election. After working on climate change solutions for over 8 years, we are finally beginning to take meaningful steps to curb this epic global challenge. I want my kids and others to have every opportunity to follow their dreams in the world we leave them. Now with the Republican controlled legislature, critical environmental gains are at stake - surely an unintended consequence. Republicans and the mighty fossil fuel industry are eager to gut environmental protections, especially the EPA's Clean Power Plan that will set standards on carbon pollution for the power sector. A host of climate deniers will now head up our nation's environment and science committees. For example, Sen. James Inhofe of Oklahoma will likely chair the Environment and Public Works Committee. In case you missed it, he authored the 2012 book, The Greatest Hoax: How the Global Warming Conspiracy Threatens Your Future. Not surprisingly, his campaign has raised over $400,000 in the past five years from the oil and gas industry. 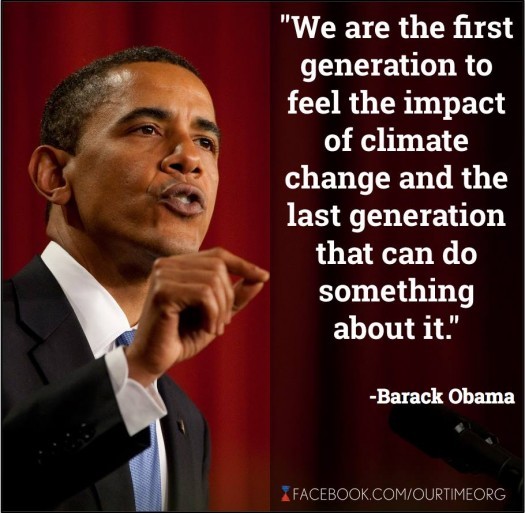 Based on environmental, economic, national security and perhaps moral rationale, President Obama has embraced gamechanging climate solutions. And it's clear that Americans support these actions - they want to cut greenhouse gases and increase renewable energy. Even in this past wave election, a majority of voters in exit polls agreed that climate change is a serious problem. Environmental health and protection should not be a partisan issue - we all share the same earth. Although anti-science leaders would like to reverse progress, there's still hope. Climate action has been gaining momentum and powerful allies are increasingly making the case to cut carbon. And I'm not just talking about a bunch of granola-eating, tree-huggers. Let me remind you of the diverse coalition that is calling for climate action:


1. Actual scientists are our side
The Republican refrain "I'm not a scientist" as an excuse for denying climate action is wearing thin. Perhaps we should heed the advice of actual scientific consensus? This month, the International Panel on Climate Change Synthesis Report was released that reviews the mounting evidence, the devastating impacts and ways we must mitigate climate change. "Science has spoken. There is no ambiguity in their message," stated United Nations Secretary-General Ban Ki-moon, "Leaders must act, time is not on our side." 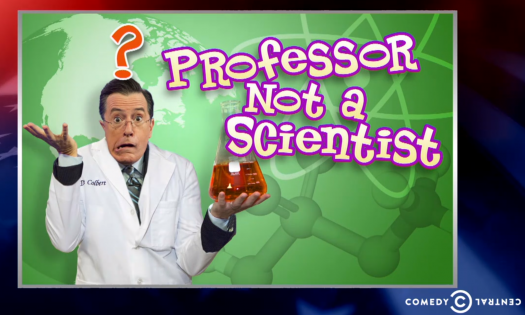 2. Prominent business leaders, including Republicans, are on our side
Michael Bloomberg, Hank Paulson and Tom Steyer teamed up for the Risky Business report released in June. It quantified the adverse economic risks from a changing climate. I attended a talk with Paulson in October, where he stressed climate change inaction will costs the U.S. billions while there is tremendous upside to following a clean energy pathway. The insurance industry understands that climate change could lead to losses on a scale never before experienced. According to a study by Munich Re, extreme weather events (such as prolonged droughts, hurricanes, floods, and severe storms) led to $510 billion in insured losses from 1980 to 2011. Experts predict climate change will continue to intensify the frequency and severity of these weather related events. 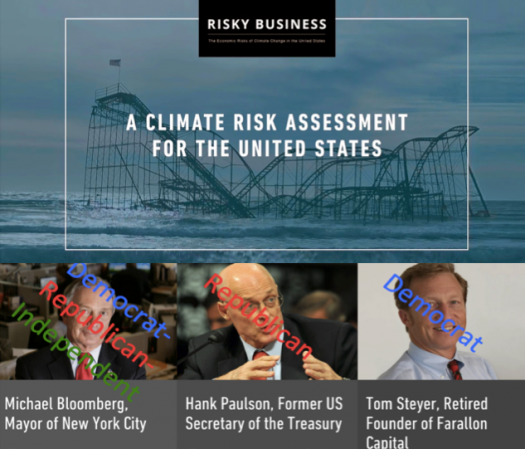 3. The military is on our side
In the strongest language ever used by the the U.S. Department of Defense, last month they reported "Climate change will affect the ability to defend the nation and poses immediate risks to US national security." Their 2014 Climate Change Adaptation Roadmap addresses climate change risks from natural disasters to infectious disease to terrorism. Every branch of the military is already working to meet clean energy goals. 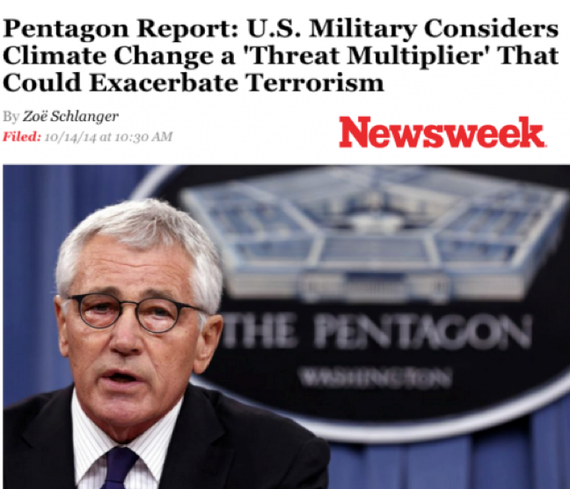 4. The world's religious leaders are on our side
I recently attended a multi-faith climate service at St. John's Divine in New York with 1,200 people from every tradition. Religious leaders from Greenland to the Philippines and Africa to the Sioux Nation - all spoke of their united commitment and the moral obligation to protect creation and humanity. Natural disasters, flooding, droughts, hunger, disease and displacement are already afflicting the world's most vulnerable - first and worst. The U.S. Catholic Bishops have come out in support of the new carbon rules, and Pope Frances is expected to soon issue a statement calling for the Catholic church to step up measures to curb climate change. He recently noted that environmental degradation "is one of the biggest challenges we have... I think a question that we're not asking ourselves is: 'Isn't humanity committing suicide with this indiscriminate and tyrannical use of nature?'" 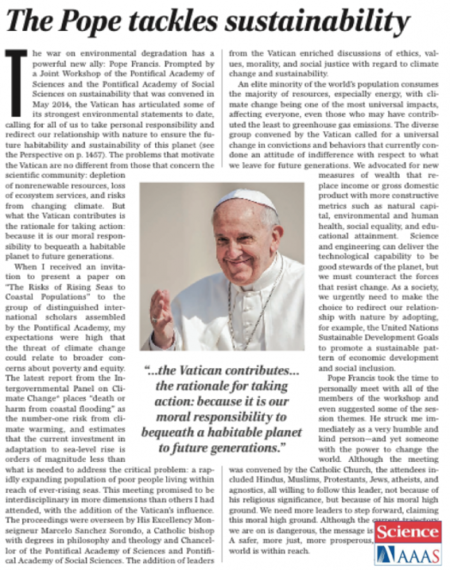 5. Corporate leaders are joining our side
Companies are finally dumping climate-denying, anti-clean energy mongers. In the past few months, there has been a mass exodus from the right wing lobby group ALEC by tech companies. ALEC attempted to roll back renewable portfolio standards in states across the country, which succeeded in Ohio. Even Occidental, the fourth largest oil & gas company, ditched ALEC along with 90 other companies including General Motors, Coca Cola, Proctor & Gamble, and Bank of America. 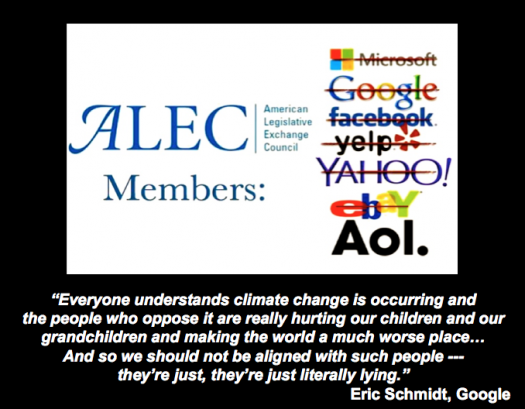 6. Citizens are on our side
In September, I joined the People's Climate March in New York with 400,000 others - the largest climate mobilization in history. It was so big, it actually took over two hours for our section to start moving, with 10 more blocks of people behind us. See some of my favorite protest signs here. Pretty much every age, race, and region showed up to send a strong message to our leaders and members attending the United Nations Climate Summit. These leaders will need to cooperate over the next year to reach an ambitious international climate agreement in Paris in 2015. We are calling for the U.S. to take bold action so the world will follow. 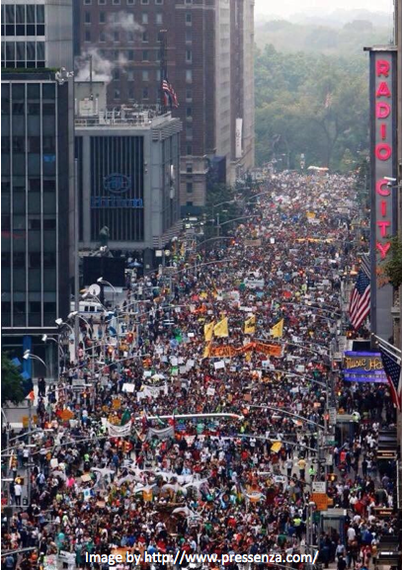 7. Next gen leaders & universities are on our side
Students are eager to tackle climate change, especially since they will inherit the worst impacts. And they are keenly aware that this environmental threat also presents vast economic opportunities. This rising interest has fueled a national green campus movement. As of today, 673 colleges are now members of the Association for the Advancement of Sustainability in Higher Education, launched to transform practices and curriculum in higher ed. Another 685 college presidents signed a climate commitment, pledging to zero out greenhouse-gas emissions and boost climate education and research efforts. Through green campus operations, research , academics an community engagement, higher ed is developing environmentally literate consumers, citizens, innovators and collaborators. Students are pressuring their schools to profit without endangering their future with over 400 Fossil Free divestment campaigns on campuses across the nation. An estimated 50,000 students from 400 campuses also took part in the People's Climate March. 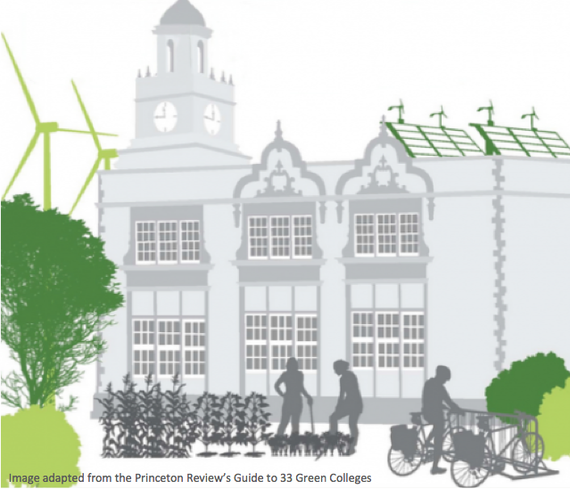 8. Investors are joining our side
The day after the People's Climate March, I attended the Divest Invest press conference. There it was announced that over 800 institutions and individuals have pledged to divest $50 billion in holdings and reinvest in renewable energy and sustainable economic development. Divest Invest plans to double this number by Paris 2015. These efforts are leading to new fossil-free funds, such as the new index by Black Rock, FTSE & NRDC. At the same conference, Stephen Heintz, the President of the Rockefeller Brothers Fund, made the bombshell announcement they, too, were divesting. He explained their oil-derived wealth gives them a special urgency and moral responsibility to do so. He added that John D. Rockefeller saw petroleum as a way to transform the world's economy from whale oil and is convinced that if he were alive today, as a visionary businessman, he would be leading the charge to get us to a clean energy economy. 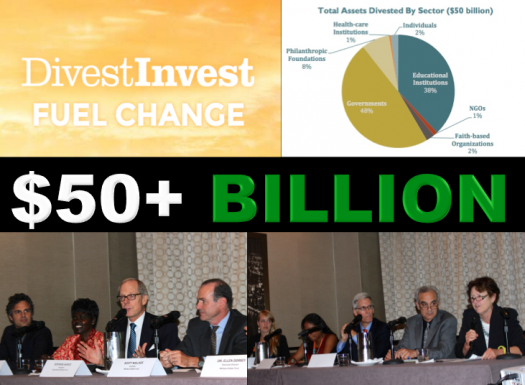 9. Job creators are on our side
Solar, wind, energy efficiency, advanced manufacturing, alternative transportation, green building, climate mitigation, sustainability - this is where good, clean, 21st century jobs will continue to be. The clean energy industry is a significant employer and an economic engine in my state and the United States. Here in Illinois, around 100,000 workers are now employed in this industry, which is more than the size of the accounting and real estate sectors combined. And this industry has tremendous potential for continued growth. According to the new Green Growth Report, investment needed to stabilize our climate could create an overall 4.2 million jobs in the US. We must innovate, progress and expand this crucial industry and workforce. There's no turning back and these industries are organizing to expand. 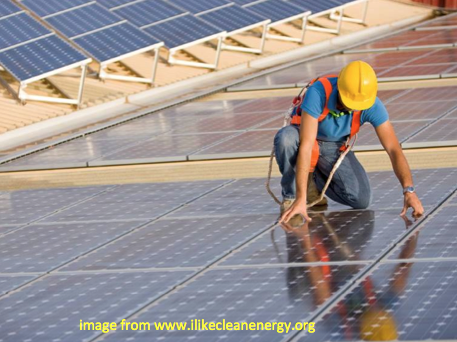 10. Sports teams and leagues are on our side
In 2013, the National Basketball Association, Major League Baseball, National Hockey League, and National Football League, as well as the United States Olympic Committee, addressed a Bicameral Task Force on their efforts to curb climate change. Each of these organizations is awake to the threats of carbon pollution, and they are acting. To learn more about how some of the biggest games in professional sports are going green, see NRDC's report Game Changer: How the Sports Industry is Saving the Environment. I even attended the NASCAR Green Summit with Al Gore and General Wesley Clark in 2013. 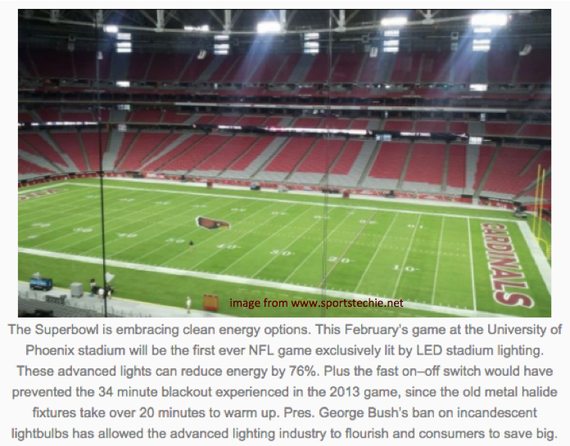 11. Late night comedy is on our side
Interestingly, some of the best and most reliable media coverage on climate issues has been coming from late night comedy. Thanks, Steven Colbert, Jon Stewart, Bill Maher, John Oliver, Seth Meyers and others for shining a light on this important issue that affects us all. Stay tuned, sadly we may now need comedy more than ever. Didn't Carol Burnett once speak of the thin line between comedy and tragedy? 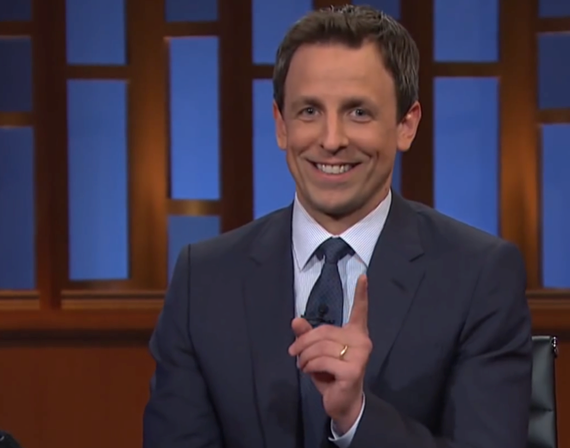 
12. Public interest groups are on our side
A host of environmental, public health, social justice and other groups - that represent millions of members - are working hard to safeguard people, the planet and our economy. They are up against the mega-funded fossil fuel industry, that now holds outsized sway with our legislators. NRDC, Sierra Club, 350.org and ELPC are a few of our most effective advocates for climate policy and clean energy solutions. You can help by giving them your attention and support.

* As an extra bonus - China is now on our side
President Obama and Chinese President Xi Jinping just reached a historic climate change deal and have vowed to curb their greenhouse gas emissions over the next two decades. 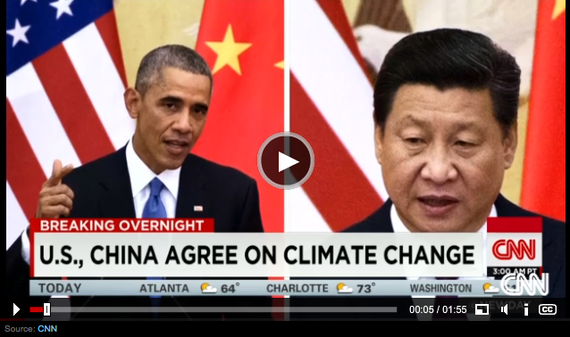 CoFounder and Director of the Hanley Foundation