As the writer of children's novels, I often get asked my opinion on the new CW series Gossip Girl.

Based on the popular young-adult book series, Gossip Girl supposedly exposes the seamy underbelly of Manhattan's Upper East Side overclass, which is addled by drugs, sex, and teeming trust funds. Its main characters backstab each other with relish against the backdrops of Henri Bendel, nightclubs, and the Palace Hotel (an aside: I'm not quite sure when the Palace Hotel became a chic destination, but let's suspend our disbelief for a few minutes, shall we?).

When posited to me, the Gossip Girl question is always laced with the presumption that I'll hate the series, froth about it, denounce it as a sullier of our nation's pristine youth.

It started to feel like a cultural obligation, to have an opinion, so this week I did what all of America's teenage girls are apparently doing: I snuggled up to my laptop, ordered up every Gossip Girl episode on iTunes, and watched 'em marathon-style.

After five hours of shrieking, conniving, attempted suicides and attempted dates rapes, pouting, clotted eye make-up, staid buffets, and absentee mothers, I sat back and ruminated. Yes, there was rampant immoral teenage behavior, but frankly, it wasn't anything that hasn't been dished up in spades elsewhere.

On a certain level, I simply felt bad for this generation of young girls, that this subpar soap opera was their guilty, voyeuristic pleasure. After all, I had cult classic Heathers, and then Clueless. At least both of these films, which similarly profile the hilariously angst-ridden inner lives of popular, minted adolescents, were intelligently-conceived satires. The characters might have been nasty little beasts, but they were also witty as hell.

Ah, but the audience of Gossip Girl gets no such lucky break; instead, this moneyed world is served up in cadaver-like earnest. And what an ugly, boring world it is.

On a certain level, I guess that Gossip Girl might just be laboring under a certain amount of genre fatigue. After seeing so many similar offerings, I've come to realize that all elite-teen-culture films and series hold certain formulas and premises sacred, such as:

1. All rich, spoiled teenage girls love to wear plaid, they love headbands, and they love white tights (even though all women over the age of ten, especially fashionistas, know that white tights make legs look fat). 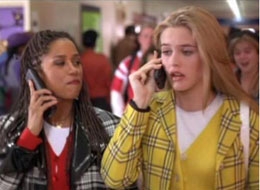 2. All Queen Bee characters have a tittering, nervous flock of several disciple worker bees. These worker bees usually consist of two loyalists, and one rebel (although Gossip Girl does an interesting twist on this theme, by strangely casting the loyalist worker bees as two inane minorities donning dreadful twin-ish outfits and speaking in unison ... go figure). 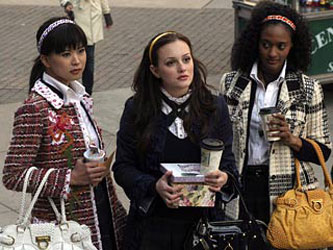 3. All of these films and series feature an unusually mature Queen Bee, both in demeanor and appearance. 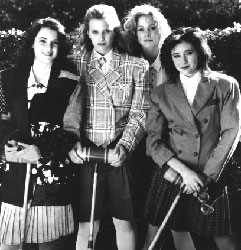 The third rule is of particular interest to me and deserves further exploration. Mull over the list of pop-culture teenage Queen Bees, and you'll realize that each of them has been rendered in a weirdly aged manner.

Consider: Heather #1 from Heathers, who at sixteen wears shoulder-padded power suits (plaid, of course), and runs her popularity operation with a Leona Helmsley-esque iron fist. Pâté is consumed with gusto in her clique.

Also consider: Caroline in Sixteen Candles, who, while dancing at a school dance in a gym coos into her boyfriend's ear: "God, I love it when your parents are out of town. I fantasize that I'm your wife and we're like the richest and most popular adults in town."

But Blair, the Queen Bee of Gossip Girl, takes the cake when it comes to this bizarre 16-going-on-60 theme. A junior in high school, hers is a world of charity committees, corporate brunches, clipboards, and buttoned-to-the-neck blouse/blazer librarian-like ensembles (presumably she shops at Barneys, not Talbots, no?). She smacks of an eerie child beauty-pageant contestant, who's been pickled in a jar of adult bitterness and regimentation.

And that's supposed to be voyeuristic and yummy? Sounds like my idea of hell, even now that I'm an urban-dwelling adult.

But now, and only now, are we hitting upon what I consider the truly insidious influence of Gossip Girl. And it's not the dreary typical drinking problems, or the fumbling sex, or the conspicuous, dull-as-dishwater material consumption.

Here is the stinger:

The intentional aging of the Queen Bee is odd in all instances, but it seems particularly curious to me within the context of Gossip Girl, which is supposed to be a showcase of uber-connected modern life. And modern life, at least in Hollywood and New York City, amounts to a youth-obsessed culture in which many people would do almost anything to turn back the clock. After all, it's considered normal in some circles for women in their 20s to get botox these days.

So why, then, are savvy screenwriters absolutely shoveling these teenage characters toward middle age? To me, that's the most inappropriate thing about the whole series. At one point, Queen Bee Blair is lying in a dark bedroom with Nate, her boyfriend-since-kindergarten. Nate has cheated on Blair; she's just found out. The scene is one of dark marital alienation as she lies with her back to him. He wears a suit and a huge Rolex; she dons a dress of thick nunnish lace and a mask of make-up. He talks of working out their problems; she resigns herself to a pragmatic reconciliation.

They are juniors in high school.

So much for the carefee golden years.

F. Scott Fitzgerald once wrote that every young woman spends her youth looking forward to her first kiss, and the rest of her life looking back upon it.

Along these lines, Gossip Girl seems to tell us that there's nothing to look forward to, and there will be nothing to look back upon ... except more of the same. We're not just destined to become brittle materialistic adults; we already are brittle materialistic adults by the time we hit puberty. We have no choice. We're wired for misery. If we have money, we're destined to be miserable with it. If we don't have it, we're destined to be miserable without it, and spend our lives with our noses pressed up against the glass.

And this demoralizing little message is the real meanness of the series.

Gossip Girl represents nothing less than the soft death of youth culture and rebellion and self-determinism. The forgettable Nate and the lumpen Blair have assassinated the joyous, restless example set by James Dean and Natalie Wood decades ago in films like Rebel Without a Cause and West Side Story. Yes, Jimmy and Natalie also had angst -- heaps of it -- but theirs was a youthful angst. They had fear, but they had hope too, and fighting spirit against the rituals that gradually deaden adults.

It may seem incongruous, that a culture that drowns itself in fountain-of-youth elixirs is striving so hard to squelch the experience of youth itself. But on a certain level, it makes sense. America has always been about leveling the playing fields. The math is being rewritten accordingly: 50 demands to be the new 40, and 40 demands to be the new 30. And they are now demanding that 15 becomes the new 50.

It wouldn't be fair otherwise.

What I recommend: when your daughters are done watching Gossip Girl tonight, have them watch The Graduate, which also showcases the booby-trap of hollow, disappointed adulthood.

But at least that film's young characters show that there's a way out -- and one of wild abandon, at that.