It is amazing how the most ordinary days and mundane activities can turn out to be the most meaningful and memorable. When the world seems like a pretty sick place, as recent news from the four corners of the globe suggests, I go back to a few moments that remind me what life is all about. 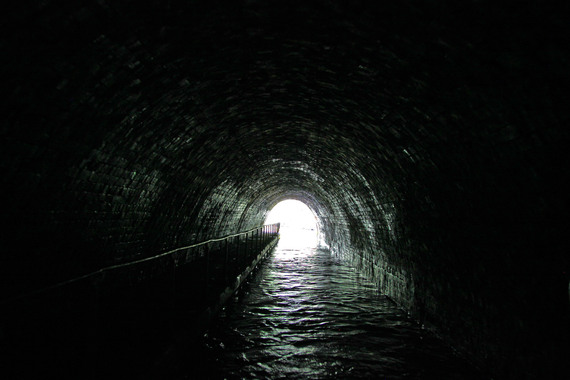 One of those times, which I have found myself thinking a lot about recently, happened when I boarded a metro car in Washington, D.C. two summers ago.

A man next to me in the rush-hour terminal was waiting for the train. He had a long white cane in his hands to help him walk without bumping into things. His jeans, if they could be called that, were ripped to shreds. His shoes had holes and the laces had fallen off long ago. His arm was covered in a nasty rash.

No one got too close to him.

"IS ANYONE GETTING ON THIS TRAIN?!" he suddenly shouted at no one in particular. In a busy crowd, everyone ignored him, including me. As the train rolled into the station he shouted again.

"IS ANYONE GETTING ON THIS TRAIN?"

As he jabbed the white cane at the metro's wall trying to find an open door, it became clear that he was totally blind, and the guy just needed somebody to take his arm and walk him onto the train. A few of us helped him find a seat. I ended up sitting down next to him.

A few stops later, he turned to me and said, "How many more to Foggy Bottom? I gotta get off at Foggy Bottom, I can't miss it."

"I'm getting off at Foggy Bottom too," I said. "It's four stops from this one."

He asked me twice more, and I kept telling him how many stops were left and that we were almost there. When we got to Foggy Bottom, the two of us stood up and walked off the train together. I took his arm and helped him walk through the mess of concrete and people, and onto the platform. He started veering off on a collision course with a bench, and I turned him back towards the stairs and said, "Just walk straight this way, we're almost to the stairs."

"Yeah, it's hard to walk straight when you're blind," he said.

I was feeling pretty awful, for ignoring him when he needed help getting on the train and now for taking for granted how easy it is to "walk straight" when some people can't even see the line. I was thinking about how hard it must be to use the metro for this guy. I wondered where he was going, and why he was so worried about missing his stop. I was about to steer him around a little boy in his path, when the kid's face lit up with a big smile as he threw out his arms.

"DADDY!!!!!!!!" he said. Arms outstretched, he ran towards us and gave my new friend an enormous hug.

I wanted to thank him. He helped me imagine the world differently, from the perspective of someone who goes every day without sight, something the rest of the world takes for granted. I'm sure I was worried about being late for dinner or forgetting to send an email. He was worried about literally going from point A to point B. He braved the metro, full of confusing pathways and jerks who ignored him when he asked them for help, just so he could see his little boy. I wish he had the eyes to see the smiles he put on everyone's faces when he hugged his son at Foggy Bottom.

When I think about what gets me out of bed in the morning, I think about that man who, each day on the metro, had every reason to feel like the world simply did not give a shit about him. There are millions of people like him who need a voice but don't have one. And no matter where we stand on our politics, our passions, or our religions, thinking about helping people like that man can reaffirm our sense of purpose.

Everyone has their own "man on the train" moment. And in times like these, it has helped me to reflect upon mine a lot more often. As long as there folks remain in this world who aren't afraid to help each other get on the train -- a demonstration of the collective human compassion we are all capable of -- we will not have to go to a metro station to see light at the end of a tunnel.