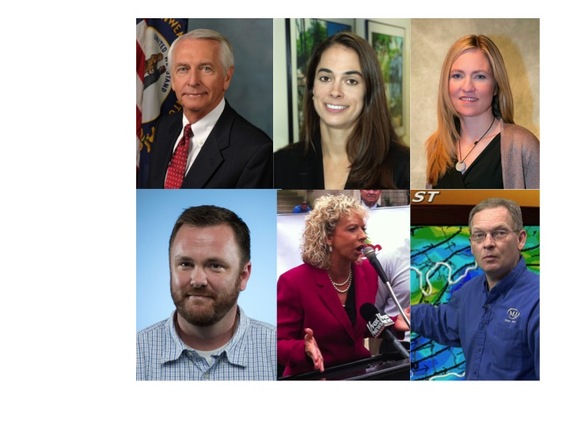 With Congressional partisanship reaching unprecedented levels and science too frequently under attack from a vocal minority, it's all the more vital to stand up for the basic idea that our choices should be informed by the best evidence and data available. That means insisting that our kids are taught solid science unfettered by political or religious doctrine, that we face up to what's actually known about the climate realities we confront, and that we draw a bright line to differentiate science-based fact from politically motivated disinformation.

This year, Got Science? is recognizing six individuals who had the courage to stand up for science in 2013. They come from all parts of the country and all political persuasions; some are scientists, others are not. What they share is that each in some way championed the simple premise that science matters -- not just for expanding knowledge or making new gadgets, but for helping us grapple with and overcome the difficult challenges we face as a nation and a planet. So, without further ado, I'm proud to present the 2013 "Got Science?" Champions:

Steve Beshear: Standing up for Science Education in Kentucky
This fall, when a Kentucky legislative review committee voted 5-1 against a plan to adopt new national science education standards that would teach kids about climate science and evolution, Kentucky Governor Steve Beshear (D) could have folded his tent. But Beshear stood strong, vowing to implement the so-called Next Generation Science Standards -- a set of goals representing the first major modernization of science education in the U.S. in a decade -- "under his own authority" as governor.

An editorial in the Lexington (KY) Herald-Leader recognized the importance of Beshear's stance, noting:

Fortunately Gov. Steve Beshear understands how important these new standards are for ensuring future Kentucky students the science education they will need as they move on through the 21st Century... We applaud him for doing what those five naysayers on the subcommittee didn't have the wisdom or gumption to do.

Jennifer Jurado: Confronting the Reality of Sea Level Rise in Florida
Coastal communities around the country are facing the daunting realities of sea level rise today, but some states, such as North Carolina, have famously responded by trying to pass legislation that actually prohibits consideration of the latest science in coastal management strategies. Jennifer Jurado, a marine biologist who heads the Broward County Natural Resources Planning and Management Division in southern Florida, is showing that science -- however frightening or inconvenient its findings -- can be a powerful tool to help communities prepare for the consequences of climate change.

Earlier this year, Jurado was among a select group honored by the White House for her work in helping to create the four-county Regional Climate Change Compact that is working now to prepare Broward, Miami-Dade, Palm Beach and Monroe counties for rising seas, extreme weather and other problems associated with a changing climate. In Broward County, Jurado oversaw the adoption of comprehensive planning documents that now include references to the possibility of a 9- to 24-inch sea level rise by 2060 and have led officials to change land-use maps and plan for coastal flooding, saltwater intrusion into fresh water supplies, and potential effects on the state's vulnerable drainage and canal systems. As Jurado explains, the economic risks and exposures in her region are great. "We have a responsibility," she says "to investigate the realities of our circumstances and share that information as widely as we can."

Kelly Giddens: Fighting Fracking with Facts in Colorado
The facts were sometimes hard to come by after a referendum on fracking was put before voters in Fort Collins, Colorado. Industry blanketed the city with advertisements, outspending proponents of a five-year fracking moratorium by 39 to 1. Kelly Giddens, campaign organizer for Citizens for a Healthy Fort Collins, not only prevailed against seemingly insurmountable odds, she used facts, not scare tactics, to make the case for a moratorium to the public.

The moratorium passed in Fort Collins, Giddens noted, because industry misinformation didn't sway citizen's votes. "People understand half-truths when they see them," Giddens said. "They did their research." Giddens says she hopes the moratorium will allow the community time to review state public health assessment studies scheduled for completion in 2016. Citizens deserve access to scientific and other information to inform their decisions on fracking. Giddens's work helps point the way.

Paul Thornton: Defeating Disinformation in California
As readers of the Got Science? column know well, fossil fuel interests such as the Koch brothers continue to pour millions of dollars into disinformation campaigns about the realities of climate science. The strategy, pioneered by the tobacco industry, aims not to convince but rather to confuse the public -- in this case about the overwhelming evidence that human activity is causing global warming.

That's why Paul Thornton's actions are so noteworthy. Thornton, an editor at the Los Angeles Times, announced this fall that his newspaper would no longer publish letters denying the reality of climate science. Thornton took some hits from some quarters for "censorship" of his newspaper's pages, but his response was eloquent and direct. "I do my best to keep errors of fact off the letters page," Thornton explained. "Saying 'there's no sign humans have caused climate change' is not stating an opinion, it's asserting a factual inaccuracy."

Debbie Dooley: Brewing a Green Tea Party in Georgia
When Georgia's Public Service Commission was set to vote this summer on whether to expand the use of solar power in the state's energy mix, the Georgia chapter of Americans for Prosperity (AFP), an organization founded and underwritten by the billionaire Koch brothers, kicked into action with a full-blown scare campaign against solar power. AFP warned that the solar proposal would "reduce the reliability of every appliance and electronics gadget in your home" and could increase Georgia electricity rates by up to 40 percent -blatantly false claims.

Debbie Dooley, national coordinator of a branch of the Tea Party in Georgia known as the Tea Party Patriots would have none of it. As Dooley told the press: AFP Georgia was "putting out absolutely false data" that failed to take into account plummeting prices of solar energy in recent years. Putting the facts above ideology, Dooley quipped that her group was forming "a Green Tea Coalition" because it recognized that the proposed solar expansion -- eventually endorsed by the commission -- was a free market issue that "gives consumers more choice."

Al Dutcher: Championing Unfettered Climate Science in Nebraska
Al Dutcher, Nebraska's state climatologist, is an expert on climate change and a professor at the University of Nebraska. He's also a self-described conservative who was outraged earlier this year when the state legislature passed a misguided bill commissioning a state climate change impact study that explicitly precluded scientists from addressing human activity's role in global warming.

Dutcher rightly charged that the state legislature and Nebraska's Republican governor were letting politics interfere with questions of science and he helped rally his fellow climate scientists in Nebraska to resist the politically tainted terms. Dutcher's words capture the spirit of all this year's Got Science? champions. As he put it: "After 25 years in my field, I've gotten to a point where I'm not afraid of the politics on this anymore. I say enough's enough. Let's stick to the science and let the political chips fall where they may."

Know of other champions of science? Share their stories here and we'll try to feature them in an upcoming Got Science? column.

Seth Shulman, Senior Staff Writer at the Union of Concerned Scientists, is a veteran science journalist and author of six books whose work has appeared in The Atlantic, Discover, Nature, Technology Review, Parade and many other publications. You can sign up to receive his monthly Got Science? column via email at the Union of Concerned Scientists website: www.ucsusa.org.