Free the Slaves periodically honors survivors, activists and organizations that demonstrate outstanding courage, innovation and dedication in the fight to end slavery. The Freedom Awards celebrate anti-slavery heroes and innovators from around the globe by showcasing what some of the best anti-slavery work in the world looks like--and by supporting that work financially. Award winners are setting the standard for successful, sustainable anti-slavery initiatives. By generating public recognition for outstanding achievement, the awards offer inspiration and boost resources for the movement.

Nominations are now open for the 2016 awards. Free the Slaves will award a U.S. $10,000 prize to an organization registered India or Nepal that is implementing an innovative "scalable" approach to ending bonded labor in India or Nepal. A scalable approach is a model that holds the potential to be spread geographically or adopted by a broader range of actors. 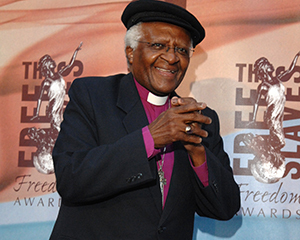 The awards remind us that slavery still exists--and that it can be overcome. Since the program began in 2008, 13 awards have been presented to winners from 12 countries. To see previous winners, visit our Freedom Awards webpage.