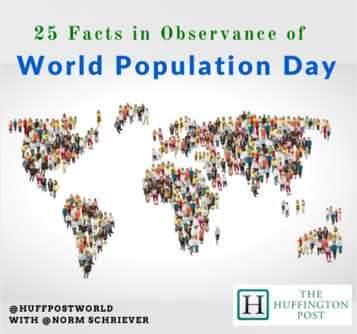 In 1989 the United Nations recommended that July 11 should be the day the international community observes World Population Day, a perfect time to highlight population issues and work to solve them together. This year's World Population Day is even more significant, with a theme of "Investing in teenage girls," a critical mission for all nations and people around the globe.

Here are 25 facts about world population in honor of the United Nation's World Population Day: 1. There are over 7.4 billion people on earth now according to the site World O Meters, where you can even watch a running count, including births, deaths, and population growth by day (although they are approximations.) (Source)

2. It's estimated that 108 billion people have lived throughout history (as of 2011). That means that approximately 6.5% of all the people that have ever lived are alive right now. (Source)

5. Do we really have too many people in the world? Standing side by side, the entire world's population would fit into 500 square miles (1,300 square kilometers) - which is less than the size of Los Angeles. (Source)

6. The difference in average life expectancy between people in developed countries and poor nations is about 20 years, or 77.1 years compared to 55.9 years, respectively. Sub-Saharan African nations have the lowest average life expectancies at 51.5 years, while Western Europeans (80.3 years) and North Americans (79.3 years) enjoy the highest. (Source)

7. About 1.8 billion people around the world are between the ages of 10 and 24, which is the largest population of young people ever. In fact, about 52% of the total world population is under 30 years old. (Source)

Large populations of young people are particularly prevalent in developing countries, with children or adolescents making up the majority in the 48 least developed nations in the world. (Source)

8. The average person on earth is a 28 year-old, right-handed Han Chinese male. There are 9 million people on earth who fit that description, more than any other. (Source)

9. The most common first name in the world is thought to be "Mohammed" or some variation, a name belonging to an estimated 150 million men or boys. It's thought to be so popular because Muslim families have a tradition of naming their first-born son after the Islamic prophet of the same name. (Source)

Likewise, the name Mary (or some variation like Maria) is believed to be the most common first name among women and girls in the western world, named after the Virgin Mary. (Source)

10. It's estimated that every second there are 4.3 births and 1.8 deaths (Source), which adds up to a net population gain of 2.5 people per second. Interesting enough, the recent population explosion isn't attributed to increased birth rates but decreases in death rates due to improvements in medicine, agriculture yields, urbanization, technology, education, disease prevention, and fewer war fatalities. (Source)

11. While our numbers are swelling, the rate of world population growth has slowed. Today, our population is growing by 1.18 per cent per year (approximately 83 million additional people annually) compared to a growth rate of 1.24 per cent per year only ten years ago. While experts predict we'll have one billion more people by 2030 (about 8.5 billion total) and 9.7 billion by 2050, that represents a slowing of the population growth rate, with the number of people expected to level off between 9 and 12 billion. (Source)

12. However, 1/3 of population growth in the world is due to accidental or unwanted pregnancies (Source), often because of a lack of basic education, family planning, or healthcare. (Source)

13. Every 20 minutes, 3,000 more people are born into the world. However, in that same amount of time, another plant or animal becomes extinct, adding up to 27,000 extinct species per year. (Source)

14. The countries with the largest populations are China with 1.38 billion, India a close second with 1.32 billion, and the United States with 324 million. Indonesia (260 million) and Brazil (209 million) are next. With a more rapid population growth, India is expected to surpass China in population within a few years. (Source)

15. If Facebook were a country, it would be the 3rd most populous in the world, with 1.39 billion "citizens" logging on to the social networking site every month. (Source)

16. Many experts point not to overpopulation but overconsumption and inequalities in the distribution of resources as the cause of many problems in the world. In fact, the wealthiest 20% of people in the world consume 86% of its goods, with the poorest 20% consuming only 1.3%.

36 of the 40 poorest and hungriest countries in the world actually export food to wealthier nations. (Source)

It's expected that by 2050, nearly 70% of the world's population will live in cities. (Source)

19. In 1900, there were only 12 cities around the world with more than 1 million people. (Source) However, today there are more than 400 cities worldwide with a population of 1 million or more and 19 cities with populations in excess of 10 million. (Source)

20. Across the globe today, 1 in 3 children under the age of 5 - about 230 million - have never been officially registered. As of 2012, only about 60% of all babies born were ever registered, with the lowest levels belonging to sub-Saharan Africa and Southeast Asia. (Source)

21. A child dies every 20 seconds because of poor sanitation. In fact, 1 in 10 people - or 663 million - don't have access to safe drinking water around the world. (Source)

23. More than 700 million women in the world were married before the age of 18 (Source), including around 15 million girls forced into marriage in 2015 alone. (Source)

24. Of the 42 million refugees worldwide who have fled their homes because of war, 80 percent are women, girls, or young children, often the target of systematic rape, violence, and terror. (Source)

25. 62 million girls are denied an education every year around the globe (Source), and about 25 percent of young women in developing nations ages 15-24 (115 million total) never finished primary school. (Source)