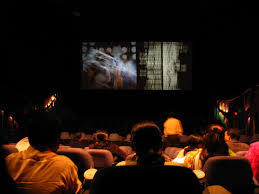 Visiting an actual movie theater for the first time in years was a strange, if not relatively unpleasant experience. The snack bar girl itched red welts on her arms that made me wary of seat cushion bedbugs. Movie previews advertised a phone app alerting older people with sensitive bladders when a boring scene came on so they could go pee.

The fact that hatchet wielding, gun toting maniacs have chosen movie theaters as locations for bloodbaths in Aurora Colorado (12 killed/ 70 injured/ Batman/ 2012), Lafayette, LA ( 2 killed/ 9 wounded/ Trainwreck/ July 2015) and Nashville, Tenessee (1 hatchet scraping/Fury Road/August 2015) feels slightly absurd. Mainstream movie theater audience members in the majority of theaters across the country are often the elderly, children and other individuals with an occasional old school fetish for real movie theaters. Movie theaters are no longer locations that seem ingrained in the American psyche. Few people can imagine themselves being bludgeoned in a movie theater, because fewer people go.

Tightening Big Brother style security in these locations will ensure even fewer people go, and movie theaters will deteriorate more. It is an ineffective, knee jerk, band aid reaction to what is hopefully a passing copycat lunatic fad. However, theaters across the country are setting new security measures in stone.

Regal Cinemas recently instituted mandatory bag checks in its 156 theaters nationwide. Showcase Cinemas (owned by National Amusements), in Connecticut completely banned backpacks and packages. Off the charts security measures ranging from metal detectors to TSA scans in movie theaters are being proposed by everyone from legislators to CEO's.

Tighter security measures may border on civil rights violations, paves the way for 1984 brand mechanisms to be put in place in public spaces and deteriorates our chances of retaining our humanity. Turning public places into fortresses ultimately increases tension and escalates, rather than deters, violence.

1) Bag Searches are a Killjoy: There is pleasure left in movie theaters---particularly in art theaters in larger cities that have retained old school style and charm. It's still possible to sit in a theater and fantasize about being magically transformed into the lusty heroine on the screen, to become transfixed by an elegant landscape, enamored with the amplified echo of ice cubes clinking in crystalline glasses of scotch.

Security rifling through your bags can put a serious damper in the dreamscape of movie theaters. (They also make it impossible to bring bootleg store bought jolly ranchers and sour patch kids through the door.)

More importantly, bag searches just set precedence for more interference. Although airports may be appropriate places for metal detectors, TSA scans and the occasional body cavity search--movie theaters are not.

2) These Responses are Profoundly Ineffective. No axe wielding, gun toting, pepper spray sporting disgruntled American wanna be cartoon villain or psychopath is going to be deterred by a bag search. James Holmes walked out a back door in Aurora to get his weapons and reentered the theater through the same door with them before opening fire. Lafayette's John "Rusty" Russel Houser had a gun on his person but left and returned through a side door. Vincente Montano, admittedly, did bring his pepper spray and hatchet in two backpacks---but if back checks were instituted, it's likely he would have found another way.

Doing bag checks is a silly gesture, at best. Movie theater security staff peeking into bags will do nothing to keep weapons out. It will only make patrons more anxious.

3) There are bigger fish to fry here. Ramping up security anywhere a mentally impaired, deranged, racist or psychotic person has gone on a rampage and killed people in the US in recent years would require psycho security in elementary schools, churches, synagogues, as well as movie theaters. Creating more barriers as a reaction to large scale violence is fruitless. Maniacs can slip through the cracks anywhere, and there are no barriers without cracks. Turning ourselves into a well walled country, gives us even less of a chance to address deeper problems and retain our dignity as people. We should not be looking at how to fortify ourselves against gun violence, or mentally ill people running amok, after the fact---but addressing the underlying causes of those issues, first, before the chaos occurs. The fact that we aren't is sad.