It's the fifth anniversary of Citizens United v. FEC, the case that launched a thousand SuperPACs. Here in Colorado, we are recovering from a collective post-election hangover after record spending on political advertising in 2014's state and federal elections. Only after the year-end public disclosure reports are filed can voters see how much big money is seeking to influence our elected officials.

Colorado Ethics Watch has released analysis of one industry's spending in the report Money Spill: Oil and Gas Spending in Colorado's 2014 Election. A past report showed political spending by oil and gas industry corporations and trade groups in the 2010 and 2012 state elections cycles combined was over $800,000; this year's report revealed 2014 spending at $11.79 million. The majority of this money was raised and spent by a ballot issue committee created to oppose various well-funded proposals to limit fracking. Oil industry spending through the committee continued, however, even after those ballot measures were withdrawn as part of a compromise that created a task force to review the issues surrounding fracking and recommend legislative action. 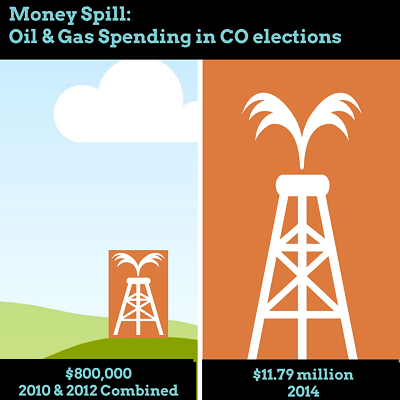 In this post-Citizens United era, 2014 saw over $900,000 of oil and gas industry money also flowed into numerous PACs, SuperPACs, candidate committees, party committees and 527 political organizations in Colorado. Colorado law has attempted to blunt the crushing effect of big money in politics through strong public disclosure laws that require spending by each of these groups in candidate elections to be reported online to Colorado voters. The U.S. Supreme Court's latest ruling allowing more money to flow into elections from the wealthiest of individual donors -- McCutcheon v. FEC -- noted that "[t]oday, given the Internet, disclosure offers more robust protections against corruption."

But, we don't live in an age of complete, instantaneous disclosure of political spending that is easy to use for voters. In Colorado, the online database of political spending does not allow voters to search for spending by specific industries to see how much influence oil companies or banks or unions or marijuana companies might have on their elected officials. It takes a lot of time and effort to re-create the data and organize it for those purposes.

Until other reforms are enacted to counter the effects of the Citizens United ruling, public reporting of spending shines a light on big money interests' investment in the outcome of elections, so that citizens can to hold public officials accountable if they put private industry's interests over the common good.