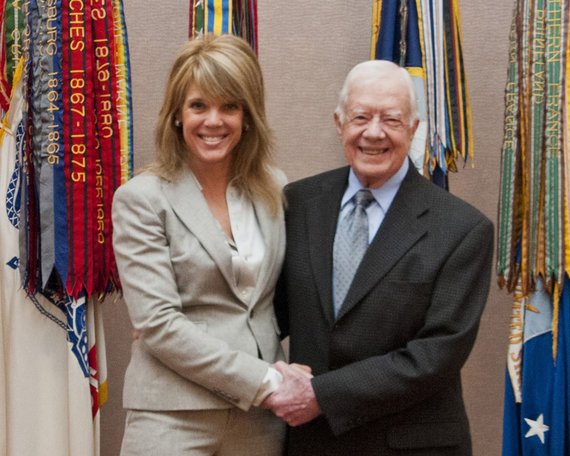 Photo courtesy of the Carter Center

The world's discrimination and violence against women and girls is the most serious, pervasive, and ignored violation of basic human rights: This is President Carter's call to action.

And I agree with him. Violence and discrimination against women and girls is pervasive and rising around the world. Who are these women and girls? They are our mothers, our sisters and our daughters. The effects of the violence and discrimination extend far beyond just the victims of the abuse, but to every member of the community. Strong correlations have been drawn suggesting communities where violence against women and girls is prevalent are often blighted by poverty, crime and lack of resources.

President Carter published his 28th book "A Call to Action: Women, Religion, Violence, and Power", detailing his experience in traveling to over 145 countries and seeing firsthand the shocking reality that women around the world are being denied equal rights. He posits that there are essentially two underlying causes; the first being the manipulation of religious texts and the second, the excessive presence and acceptance of violence.

He points out that religious texts are being selectively taken out of context by oppressive male leaders to support the subjugation and the denial of basic rights to women. He gives a number of examples, including his own experience as a faithful Southern Baptist for over 70 years. He also points out that faith leaders have a special responsibility in taking action against the violation of women's rights. For the third year in a row, faith leaders and courageous human rights defenders met at The Carter Center to mobilize faith groups worldwide to commit to advancing women's rights.

From violent video games to constant participation in war after war, violence has become an accepted reality and response. Men are taught directly and indirectly that rape and violence can often be committed with impunity. Take for instance, the oppression of rape victims' rights in the military or campus attacks on young women being swept under the rug by school administrators to save their reputations. Rape, infanticide, genital mutilation, slavery, child marriage and honor killings are just some of the realities faced by women today in alarming numbers. According to the U.N., one in three women will be raped or brutalized in their lifetime -- that's 1 billion women worldwide. And even more shocking, President Carter has estimated "160 million girls are now missing from the face of the earth because they were murdered at birth by their parents or either selectively aborted when their parents find out that the fetus is a girl."

But what can you do about it?

President Carter reminds us in his book that each and every one of us has the power to do something. When you speak out forcefully, you give a voice to the victims and you halt the progression of the abuse.

I started using my voice to speak out against violence towards women and girls when I became involved in Eve Ensler's non-profit V-Day. In 2013, the organization kicked off its One Billion Rising campaign to bring women, girls and a supportive community together to raise their voices against violence and demand racial, economic and environmental justice for women and girls around the world.

In Atlanta, the One Billion Rising campaign addressed many issues but our focus was on raising awareness about human trafficking and ending it. The Carter Center's Senior Project Advisor of the Human Rights Program Karin Ryan, for whom the book is dedicated, has worked on behalf of the voiceless with a passion especially for women and girls. We were honored to have her give a keynote speech at the event. According to a study commissioned by the Justice Department and done by the Urban Institute, Atlanta is one of the worst cities in the U.S. for human trafficking. In his book, President Carter puts the number of girls being sold into slavery in Atlanta at between 200 and 300 girls a month (page 127). According to the Urban Institute's study, Atlanta had the largest underground commercial sex economy in 2007 at $290 million. This is unacceptable. Often times we hear about this issue and think what can we possibly do to help the women in Africa or the Middle East, the problem is too vast, too overwhelming. Well the truth is we have a problem in our own backyard and you can do something about it. Use your voice, participate, hold your elected officials accountable and encourage faith leaders to advocate for full human rights and dignity for women.

I am proud to serve on the Carter Center's Board of Councilors and am always inspired by the many ways President and Rosalyn Carter, as well as the Carter Center's expert staff, have worked for decades to create a peaceful and equitable world. His book, "A Call to Action: Women, Religion, Violence, and Power", is a critically important read and step towards bringing justice and basic human rights to women.