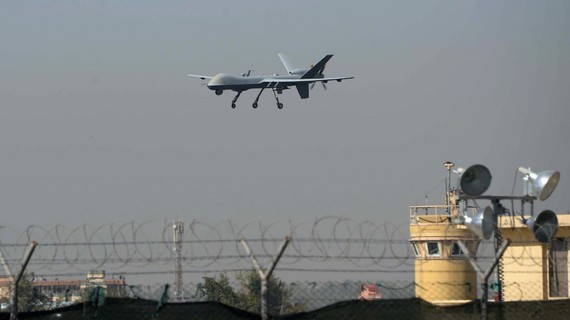 Mary Anne Grady Flores is in jail today and American citizens everywhere can surely breathe a sigh of relief that we are safe from her criminal behavior at least for the next six months.

That's the length of the sentence this 59-year-old peace activist in upstate New York began on Tuesday -- one day after the United States honored Dr. Martin Luther King, Jr., for his commitment to nonviolent civil disobedience. If he were here today, the martyred Dr. King would surely be shaking his head that America still has a problem with peaceful dissenters of conscience.

And what exactly did Grady Flores do to warrant spending the next six months in jail? She photographed a peaceful protest outside Hancock Field Air National Guard Base near Syracuse, New York. The base is where the U.S. trains pilots to launch drone strikes in the Middle East, particularly in Afghanistan, Pakistan and Yemen. It wasn't a crime for her to be taking pictures of the demonstration, but when she briefly and unintentionally -- yes, unintentionally -- stepped onto a road that belongs to the base, she violated what authorities called "an order of protection," which had been issued in 2012 to forbid protesters from approaching the home or workplace of Col. Earl Evans, a commander of the 174th Attack Wing of the Air National Guard. She had never met Evans, never threatened him, never showed any intention of harming him.

Nonetheless, a town justice, David Gideon, issued the order to "protect" the Colonel from the activists. That's right -- the commander of a major military operation, piloting drones on lethal missions half-way around the world, requested a court order of protection against a group of mostly gray-haired demonstrators whom he had never met. In stepping briefly on the roadway at the base, Grady Flores violated that order, despite the fact that, as she says, "We weren't at the security gate. We were out at the roadway."

Now get this: The order issued by Judge Gideon was of the sort commonly used against victims of sexual or domestic abuse. "The legal terms 'victim' and 'witness' have been expanded in this case in a way that's new and unique in the state of New York," said attorney Lance Salisbury at a press conference yesterday before Grady Flores was hauled off to jail.

Grady Flores had protested outside the base before. She belongs to The Upstate Coalition to Ground the Drones and End the Wars, which has criticized the drone program since 2010, calling for a change in policy to uphold life and law.

President Obama and the Pentagon insist that using drones in pursuit of terrorists causes minimal civilian casualties and protects American troops, but Grady Flores takes issue with that justification. She told us she had been moved, in particular, by reports of the staggering numbers of civilians killed by US drones, and she says her fears were confirmed by documents recently leaked to journalists at The Intercept revealing that during one five-month stretch, 90 percent of those killed in one part of Northeastern Afghanistan were not the intended target.

Grady Flores says she was also shaken by the 2013 testimony before Congress of a family from Pakistan that had suffered a drone strike in North Waziristan. A grandmother of three herself, Grady Flores listened as Rafiq ur Rehman recounted his mother's death in the presence of her grandchildren. "She was out in the fields picking okra with the kids around and a drone strike happened, and she was sent to four winds... now the kids live in terror," Grady Flores recalls.

"That's why citizens are at the gates of Hancock," says Grady Flores. "That's why we're there."

Grady Flores was arrested in 2012, when she and 16 others blocked the entrance to the base, prompting the request from the military for the order of protection. When she was arrested again a year later -- not for protesting herself but for stepping on the road outside the base and taking pictures of others who were protesting -- she was found to be in violation of that protection order. And the protestors she was photographing? They were acquitted.

Justice David Gideon threw the book at her. He sentenced her to a year, claiming in his five-page ruling that he didn't buy her First Amendment argument. Instead, he thought she "was willing to 'break the law' to seek publicity for her cause." After an appeal, her sentence was shortened to six months.

Before she went to jail yesterday she told us: "I asked my grandchildren, 'Do you know where I'm going?' and they said, 'yeah, you're going to jail, Nana.'" She told us that it is difficult to leave her 88-year-old mother who is ailing, but that her mother appreciates her carrying on in the tradition of Dr. Martin Luther King and the iconic Catholic activist Dorothy Day, with whom her mother once worked. Day famously said, "No one has a right to sit down and feel hopeless. There is too much work to do."

Grady Flores says her mother's good-bye shared that sentiment, "Mom said to me, 'I'll pray for you, I'll be with you in that cell.' She said it in a whisper, but she's grateful that I'm continuing the work."