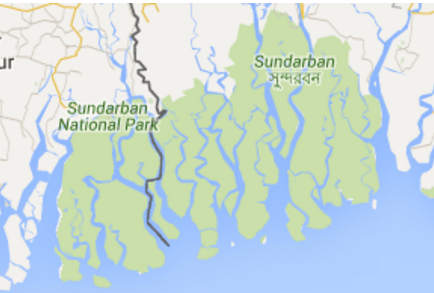 Over six million people. Bengal tigers. Ganges and Irrawaddy Dolphins. What do all three of these have in common? The Sundarbans, a UNESCO World Heritage-listed mangrove forest, a recognized Ramsar wetland, and the world's largest delta, stretching across parts of Bangladesh and India. Its name, Sundarbans, means "beautiful forest" in Bengali.

This international treasure hosts an important Biosphere Reserve and a national park (providing highest level of protection) on its Indian side, and on its Bangladeshi side, it hosts three protected forests. The Sundarbans are home to a myriad of wildlife, including the Ganges and Irrawaddy Dolphins and is the largest habitat of the majestic Bengal Tiger. Over two million people's livelihoods depend directly on access to the Sundarbans' natural resources, while many more millions live in and depend on the Sundarbans indirectly. Stretching over 6,200 miles, the forest protects over 70 million people and the eighth most populous country from increasing climate disruption-driven extreme weather events like stronger tropical cyclones, on both sides of the Bangladesh-India border.

And the Sundarbans are in trouble.

This global treasure and the water bodies surrounding it have played witness to several disasters over the past few years. On March 19, a cargo vessel carrying 1,235 tons of coal capsized in the Shela River at the Chandpai Range of the Sundarbans. In October 2015, another coal vessel carrying 510 tons of coal capsized in the Passur River. In May 2015, a vessel with 500 tons of toxic fertilizer sank in the Bhola River in the Sundarbans. An oil spill from a sinking tanker in December 2014 spilled 357,665 liters of furnace oil into the Shela River. Despite these disasters, this is just the beginning for what is possibly to come to the Sundarbans -- a destructive coal development. Two coal-fired power projects -- the Rampal and the adjacent Orion-Khulna projects -- are proposed to be built less than nine miles away from the Sundarbans, and one of these plants will potentially be financed by the U.S. Export-Import Bank.

A joint venture between Bangladesh's Power Development Board (PDB) and India's state-owned National Thermal Power Corporation (NTPC) is already constructing the 1,320 megawatt Rampal power project, also known as the Maitree Super Thermal Power Project, that now threatens to devastate the Sundarbans and the communities whose livelihoods depend on it.

The Rampal coal project, if completed, will consume about 13,000 tons of imported coal daily, result in over six miles of river dredging each year, create a 25-acre coal ash pond filled with toxic sludge, and release over eight million tons of carbon dioxide annually, or the equivalent of cutting down 340 million trees each year. The 4.7 million tons of coal needed to supply this plant every year will be shipped close to the coast in the Bay of Bengal at Akram Point and carried in barges through the fragile river in the mangrove forests, day in and day out, spilling huge amounts of coal dust into the fragile ecosystem. The Orion-Khulna power project, a 660 megawatt coal-fired power project privately owned by Orion Group, will add half as much of these toxic discharges to the water, air, and land. And taking advantage of the projected power availability, cement plants, shipyards, and many other polluting industries are already making a beeline for this endangered forests.

Orion Group has also sponsored the Orion-Dhaka a plant in the Mushiganj District, around 150 miles south of Dhaka, Bangladesh's densely populated capital city. According to Orion Group, this Orion-Dhaka Plant may be financed by the U.S. Export-Import Bank.

India is playing a massive role in the Rampal project with its state-owned NTPC holding 15 percent equity, the Indian Ex-Im Bank's financing the $1.82 billion project, Bharat Heavy Electricals (BHEL) winning the bid as a supplier, and PricewaterhouseCoopers (India) contracted to source coal for the project. The project would actually be illegal on the Indian side of the Sundarbans, as India's Wildlife Protection Act calls for a 15-kilometer exclusion zone around national parks, wildlife sanctuaries, and reserve forests, and the Rampal power plant is only 14 kilometers away from the Sundarbans.

NTPC is both the largest power producer and the largest polluter in India, and in tandem with Coal India Ltd, is the world's largest coal producer. Together, these two companies have displaced and devastated the tribal, indigenous, and farming populations in many forested regions in central and eastern India, poisoned many rivers, and caused massive health issues for the millions who live near their projects. And in Bangladesh where the environmental and social laws are even less stringent than in India, the consequences of the Rampal power project would be devastating. 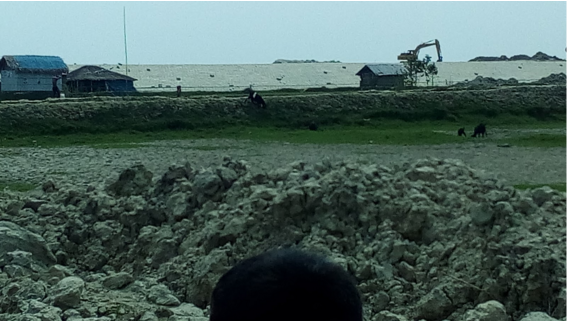 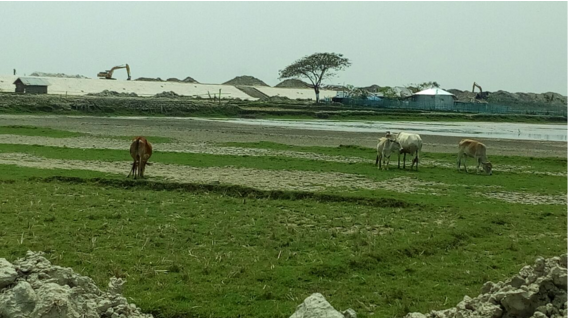 Local Resistance from Bangladesh To India 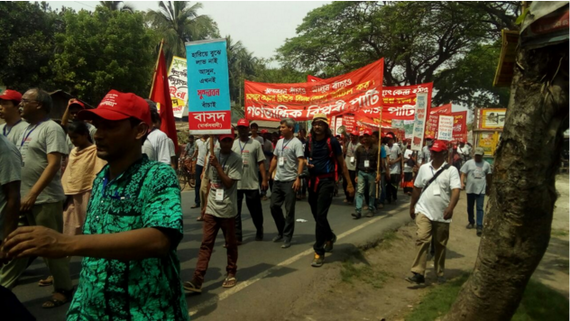 But these destructive coal projects have faced massive public resistance for years. The people of Bangladesh have been tirelessly fighting to protect their homes, livelihoods, and the Sundarbans. And as a result, the development of the Rampal power project has been delayed several years. Since 2001, communities in Bangladesh have been protesting to save the Sundarbans. Faced with these devastating prospects, people of Bangladesh started organizing protest marches and rallies across the country. Over 20,000 people participated in the first Long March in 2013, marching nearly 250 miles from Dhaka to Rampal in protest of the proposed coal-fired power project. The protest was organized under the leadership of the "National Committee for Protection of Oil, Gas, Minerals, Electricity, and Ports."

The second Long March was held from March 10-13, 2016, and nearly a thousand people from all walks of life in Bangladesh marched again for over 100 miles in protest of both the Rampal coal project and the adjacent Orion Khulna power station. There were over a dozen large public meetings in as many towns on way from the capital Dhaka to the small town Katakhali during these four days, and throughout the march there was strong participation from youth, student unions, worker's unions, left parties, and other people dependent on the Sundarbans.

Looking at the massive role the Indian government is playing in Rampal coal project, an 11-member-strong contingent of Indian civil society activists took active part in the Long March to express solidarity and share actions. Throughout the route, activists heard many chants -- "There are alternatives to power, BUT none for the Sundarbans," "Sundarbans is our mother, we will not let it get destroyed," "We will give our blood and our lives, but not the Sundarbans," "Coal plants kill and damage. We won't let it happen here."

The march ended the afternoon of March 13 with a large public meeting, giving a warning to Bangladeshi government to scrap the plan for the Rampal coal project or face even larger public actions. 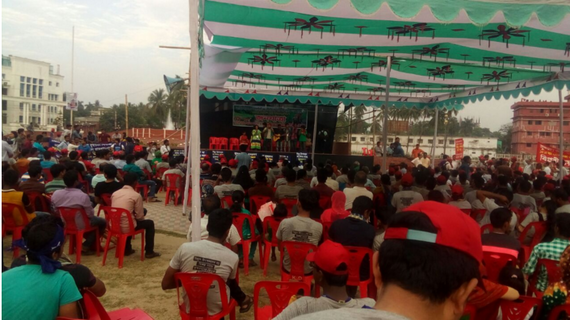 Internationally, many organizations and activists are standing in solidarity to save the Sundarbans. Seven U.S.-based groups have already coalesced to urge the U.S. Export-Import Bank to publicly commit to rejecting any proposal for the financing of harmful coal projects near the Sundarbans and any other harmful fossil fuel projects in Bangladesh.

Today, there are economically competitive alternatives to massively damaging coal. Bangladesh, in particular, has one of the fastest growing solar home system projects in the world. As it is already one of the most vulnerable countries to climate disruption, Bangladesh should not commit to disastrous projects like Rampal and Orion. Already facing massive land erosion, farm-land salinity, and submergence due to climate change effects, the rights of communities in Bangladesh need to be supported now more than ever. 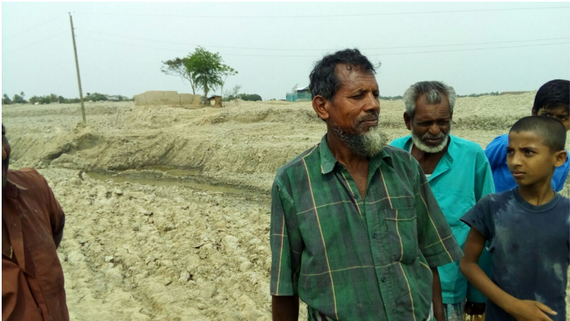 There is no excuse for destroying one of the world's greatest treasures, and the home for so many, in the name of fossil fuels. It is time for U.S. financial institutions to join the Norwegian Sovereign Wealth Fund and major French banks and say no to financing coal projects in Bangladesh and near the Sundarbans.

Co-authored by Soumya Dutta, National Convener of the Indian people's science campaign (Bharat Jan Vigyan Jatha) and the Convener of the Climate and Energy Group in the Beyond Copenhagen collective in India