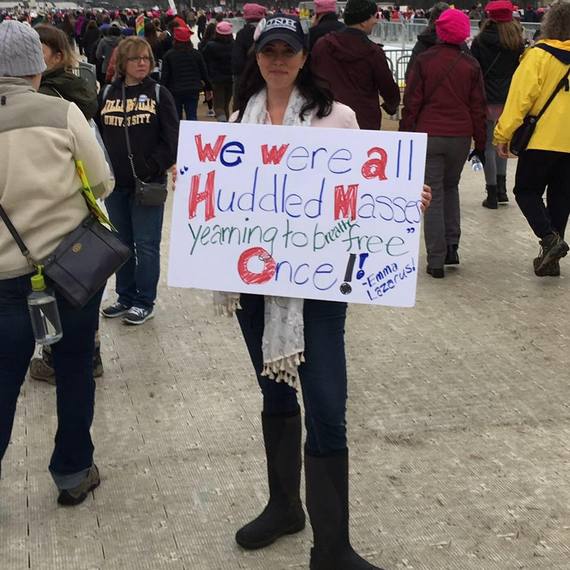 One week ago, I was marching through the streets of D.C. with a phalanx of fellow protesters. It was empowering to be surrounded by a mass of people advocating for their beliefs. In the week since I have been struggling to put the entire experience in perspective -- to create a plan of action for fighting the good fight in a world where "good" and "truth" are moving targets.

I know I have not been alone in this. My marching group included a Ph.D. in American History, a doula in training, a community activist and reverend, an artist and a Biological Scientist. All have been creating plans to keep the march momentum going. For me, clarifying and exploring what I believe and why I marched has been my priority.

If the Women's March concretized one overarching theme for me it was this. The right to disagree is a fundamental component of a free society. I have no qualms with the people who respectfully disagree with me and support my right to do the same. My fundamental disagreement is with the people trying to abridge my freedom to dissent and advocate a different point of view.

[F]reedom to differ is not limited to things that do not matter much. That would be a mere shadow of freedom. The test of its substance is the right to differ as to things that touch the heart of the existing order.

These are revolutionary times, and they demand a new Declaration of Independence, in this case, independence from the tyranny of those who choose the politics of hate and fear over policies that celebrate the diversity of experiences and values that ACTUALLY make our country great.

With that in mind I offer here new Declaration and statement of principles.

2) Hate is a useless and self-indulgent emotion on the right or the left. Passion can be disapproval transformed into action, but no one ever changed the world by dwelling exclusively on what they are against. It takes a passionate support of something to achieve any progress.

3) Anger can be a powerful motivator, but it is not a sustainable source of energy. If it is the only fuel you bring to the fight, you are going to flame out very quickly.

4) Facts are fundamental. As a historian, I understand that facts can be used to create drastically different interpretations of the same set of circumstances. However, at the basis of any discussion of historical or contemporary reality has to be REALITY. George Washington was the first U.S. President. the Confederacy lost the war. The number 900,000 is NOT larger than 1,800,000. This is not an "alternative fact." It is just WRONG!

5) No modern society has achieved anything worthwhile without the help of immigrants. Human beings have been moving about the planet since before our modern species even existed. In the years since these movements and the confluence of different cultures have facilitated conflict to be sure, but they have also engendered artistic, philosophical, scientific innovations- advances made possible when diverse peoples enriched each other's perspectives.

6) It is possible to support our police without supporting the comparatively FEW in their number who have forgotten their obligation to provide justice for all.

7) Men do not get stronger by making women weaker. The majority is not made superior by attacking and devaluing minorities. Denigrating one group's religion does not make the others more virtuous. These tactics only make people fearful and alienate us all from our shared humanity.

8) The U.S. is a big tent country. We are only made stronger by inviting MORE opinions, MORE perspectives, and MORE discussions.