There was applause and cheering in the room at Friendship Place last Wednesday when the First Family (including the President, First Lady, daughters Malia and Sasha, and the "First Grandma," Marian Robinson) arrived to serve a Thanksgiving Dinner to veteran families and formerly homeless program participants. 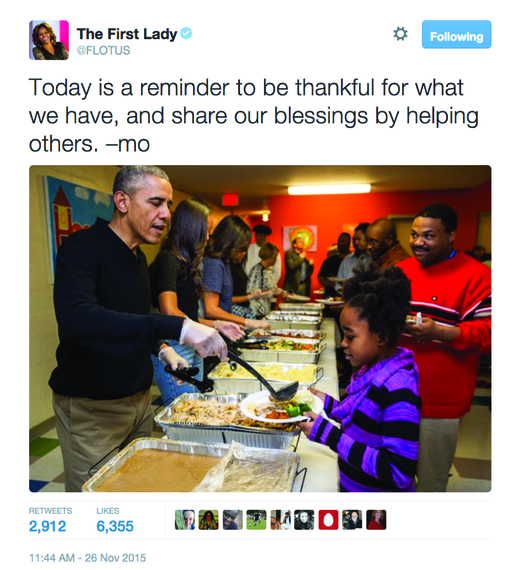 Feast with Friends, as the event is called, was our way to thank our participants for being a part of our community.

The First Family quickly positioned itself behind the line while President Obama engaged the crowd with goodhearted humor.

The meal was plated flawlessly and with a lot of love, as guest after guest engaged the family members in a bit of conversation. 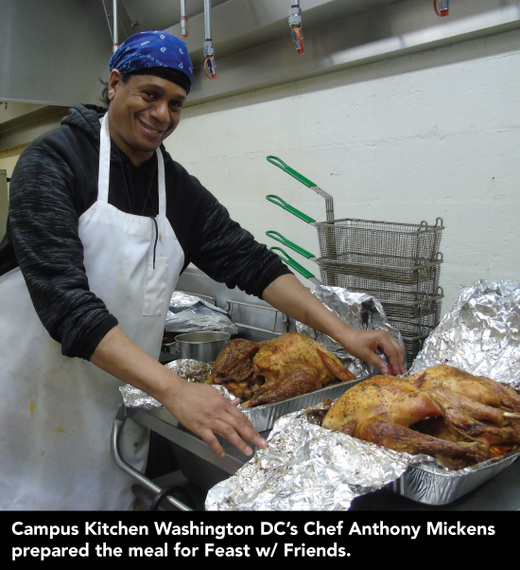 In an interview with the press during the event, the President highlighted his administration's initiative to end veteran homelessness by the end of the year.

The First Lady has played an important part in this. In 2011, she founded Joining Forces with Dr. Jill Biden to provide support to service members, veterans and their families nationwide by giving them the tools to succeed on and after leaving active duty.

As a result, Friendship Place launched its federally funded veteran program, Veterans First, four years ago to provide prevention and rapid rehousing services to veterans and their families.

The program has grown from a small grant covering one full-time staff position to a regional operation, able to support 550 households in the DC Metropolitan Area each year.

Veterans First has been noticed for its ability to move veterans with zero income from homelessness to housing stability in an average of 127 days.

Prevention support, the work to stabilize households that have received eviction papers, takes 88 days on average.

Veterans First also serves a high percentage of households earning under 30% of the area's median income.

Friendship Place has worked closely with the Department of Veteran Affairs to develop and share best practices within the Supportive Services for Veteran Families (SSVF) Program. A training component has been added to our scope of activity to support other SSVF providers at the regional level.

Shelley Gilbert, a Coast Guard veteran and graduate of Veterans First, was among the small group of people greeting the First Family. At the event, the President presented Shelley with a commemorative presidential coin for her service. Shelley frequently speaks on homelessness as a member of our board and Speakers Bureau.

Shelley's message is about resilience and rebuilding. Sharing her experience has been life-changing for her. She feels that helping others through public speaking is a way to make sense out of her own period of homelessness after she left the Coast Guard.

She often talks about how empowering the program was for her and her family because it gave them "just the right amount of help" to rebuild. For Shelley, and many of our participants, the idea that they are resilient enough to rebuild their own lives, quickly and with limited assistance, is very powerful.