Abortion solves a problem. When this solution is denied or inaccessible, the unwanted, dangerous, or abnormal pregnancy persists. What happens thereafter to the woman and her child?

Both common sense and empirical evidence suggest that children fare best when they are wanted and loved. Studies using many different measures concur. For example, unwanted children are at increased risk of juvenile delinquency. One study from Washington State found that children born to unwed teenagers had an 11-fold higher risk of becoming chronic juvenile delinquents than did other children. Other studies have found the combination of a complicated birth and maternal rejection to be associated with juvenile crime.

However, several landmark studies with contemporaneous comparison groups offer the greatest insight into the consequences of giving birth to an unwanted child. Longitudinal studies in Sweden and Czechoslovakia have followed women and their children forward in time from abortion denial; some of these studies have tracked their offspring for several decades. Rather than dramatic harms, these studies portray lifetimes of underachievement and social distress for the unwanted children.

A psychiatrist and social worker followed children born after denied abortion until they were 35 years old. After the Swedish laws were liberalized in 1939, a hospital committee reviewed women's requests for abortion. Overall, 197 abortions were declined by the local hospital committee. Of note, 68 of these pregnancies ended in abortion, mostly illegal, which shows the determination of the women not to continue their pregnancies. Sixty-six boys and 54 girls were followed as they grew up. For comparison, the investigators chose the next-born child of the same sex at the hospital.

Children born after denied abortion fared worse than their peers in many respects. Psychiatric hospitalization was twice as common. Delinquency was twice as common, and criminal activity was three times higher. Registration for public drunkenness was 50 percent higher. The likelihood of receiving public assistance between ages of 16 and 21 years was six times higher and of having learning disorders two times higher. In all dimensions, children born after denied abortion fared less well than their peers.

Experiences of unwanted children were similar in Prague. Abortion was legalized in 1957, and a local commission reviewed abortion requests. Among women denied abortion, 220 children were then followed forward in time. A carefully matched control group of children was followed as well.

Disadvantages of being born unwanted appeared early. By third grade, unwanted children were already under-performing. The postulated mechanism was termed "psychological sub-deprivation." Basic emotional needs of these children had not been met, and the consequences manifested in school performance and social development. Children born after denied abortions were at increased risk of psychiatric and counseling referrals. Alcoholism and criminal activity were twice as common. The greater reliance upon psychiatric treatment persisted into young adulthood.

Several studies have documented the difficulties encountered in accepting an unwanted child. In a Swedish report, half of 249 women had emotional stress that resolved over time, while another quarter had persistent evidence of mental illness and stress. A similar study from South Africa documented more anxiety and guilt among women whose abortion was denied compared to those whose request was granted. Another study found that a third of women denied abortion harbored long-term resentment of the unwanted child.

The landmark Turnaway Study in San Francisco has been following women unable to obtain abortions because of gestational age limits. One year after the denied abortion, these women were more likely to be receiving public assistance than were women who had abortions. In addition, they were less likely to be employed full-time and more likely to be living in poverty. Denying women abortion can send them and their children spiraling into economic deprivation.

Most women find relinquishing a child for adoption emotionally unacceptable. Indeed, this course of action has almost disappeared in the U.S. Before 1973, never-married women gave up about 9 percent of babies. By 1989-1995, the proportion had dropped to less than 1 percent. More recently, the figure has hovered around 1 percent-2 percent. 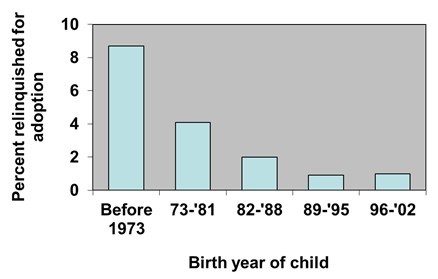 The literature on the psychological effects of child relinquishment is limited but worrisome. Serious grief reactions were common. Among women hospitalized for serious psychiatric disorders, child relinquishment was reported to be far more distressing than was abortion. Another study found that 95 percent of women felt grief and loss, and these feelings persisted for up to 15 years in two-thirds of women.

Denying abortion does not resolve the underlying problem prompting the request. Many desperate women will still find a way to end the pregnancy, whether by dangerous, back-alley procedures or by unsupervised self-abortion. Others are forced to travel great distances to get help. Many women have no recourse other than forced motherhood. Since few babies are relinquished for adoption, women become mothers by default.

These unwanted children fare less well in life than their peers. Their social handicaps persist at least into adulthood. Under-employment, poverty, and dependency on social services are other consequences of denied abortions.

Those who seek to limit or prohibit safe, legal abortion need to understand the damaging consequences for the unwanted children, their mothers, and society. Denying abortion is linked to social maladjustment, delinquency, crime, alcoholism, under-employment, and poverty. Motherhood should be a choice.