Midwives are an integral and inseparable component of the health care delivery system. They play a vital role in improving maternal and neonatal health worldwide. Midwife is the first point of contact for most of the women during pregnancy and also the first one to lay a hand on a child as soon as it is delivered.

In developing countries like Afghanistan, midwives bring great hope to the tens of thousands of women who have no access to doctors or clinics. Just ten years ago, Afghanistan was the most dangerous place in the world for a woman to give birth. The life time risk of maternal deaths was 1 in 6 which translated to one woman dying every 27 minutes.

According to a report released by World Health Organization (WHO) in 2012, the maternal mortality worldwide has dropped by 47 percent since 1990. The most encouraging news is that the number of maternal deaths in Afghanistan has declined by 65 percent. It's without a doubt one of the most admirable achievements of the Ministry of Public Health and international humanitarian organizations operating in Afghanistan. You may wonder, how did this happen? Is this the real situation on ground? The intent of this article is not to defend the above stated findings of the WHO report, rather to shed light on those avant-garde interventions and indefatigable community based approaches that led to a significant reduction in maternal mortality in Afghanistan.

Adequate and qualified human resources for health (HRH) are widely recognized as a key element of sustainable and effective health care system. World Health Organization (WHO) recommends one skilled birth attendant for every 175 pregnant women. In contrast, Afghanistan had only 467 trained midwives in 2002. Badakhshan, the most remote and inaccessible province in Northeast Afghanistan, painted an even gloomier picture where 6,500 out of 100,000 women died as a result of pregnancy, child birth or post-delivery complications. The most unfortunate situation was that the entire province had less than ten trained midwives to provide emergency obstetric and new born care to women and newborns in Badakhshan. 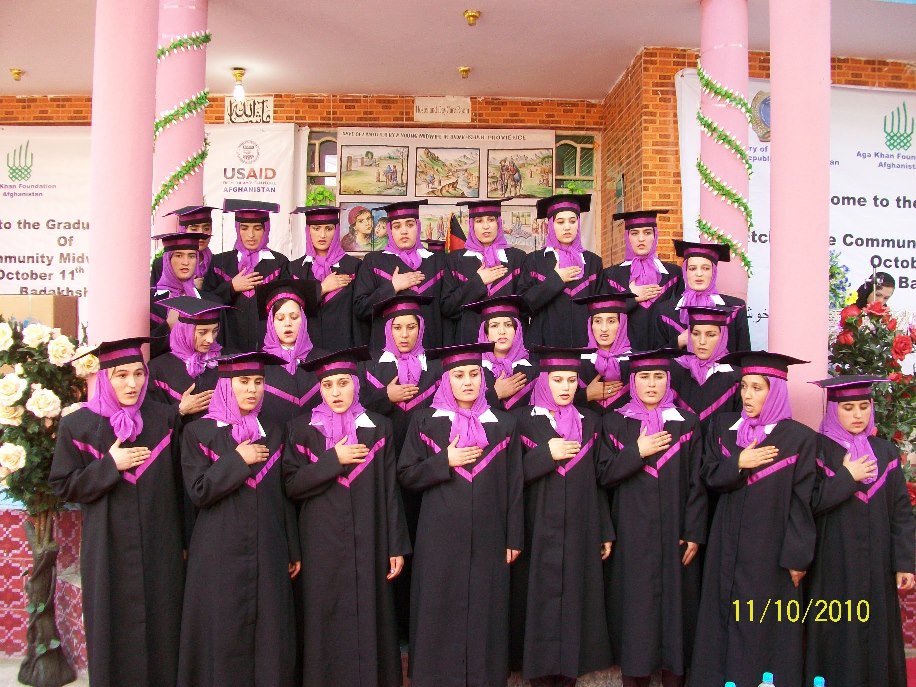 In order to support and complement Basic Package of Health Services (BPHS) and Essential Package of Hospital Services (EPHS) projects in Afghanistan, the Ministry of Public Health in collaboration with the U.S. Agency for International Development (USAID) and other donor agencies established community midwifery schools in almost all provinces of Afghanistan. Badakhshan -a province with no road access, harsh and long winters, low level of literacy and above all high rates of maternal deaths, was the most challenging place in Afghanistan to implement this ingenious project. Aga Khan Development Network (AKDN) in partnership with Ministry of Public Health Afghanistan, Jhpiego and local community took up the challenge with gusto and kicked off the community midwifery education (CME) project in Faizabad in early 2005. It was a time when girls had no access to education, employment and health care in Afghanistan. At that time, finding eighth grade matriculated girls from remote districts in Badakhshan for Community Midwifery School was a hard nut to crack. A joint team from Department of Health and Aga Khan Development Network went door to door to convince parents that the battle against maternal and child mortality in Badakhshan cannot be won without their support and commitment. They need to allow their daughters to go to the midwifery school to become community midwives. The religious leaders also voiced support for the community midwifery education program which without a doubt, paved way for high value maternity care system in Badakhshan. Sairam Saadat was amongst the first batch of eighteen students who enrolled in the community midwifery school in 2005. In 2011, she shared with me the challenges that she overcame to become a midwife.

"In 2005 I was an eighth grade student at Najeebullah Shaheed High School in Faizabad. I still recall the day when some people from AKDN came to my house to persuade my mother to allow me to study at Faizabad Midwifery School. In the beginning, my mother was very reluctant and of course she should be. After all, I was her eldest daughter and after the death of my father, all responsibilities had devolved on her shoulder.

It had always been my dream to be a health professional and save the tens of thousands of women in Afghanistan who were dying during pregnancy or child birth. After struggling for many days, I finally convinced my mom and made my way to the community midwifery school. My relatives and other people in the area were distraught over my decision. Some of them stopped talking to me. When I left for midwifery school in the morning, everyone stared at me with an odd enigmatic smile. Some people thought I would become a traditional birth attendant whose job would be to clean up the filth after birth. Some were fearful that I might interact with male doctors and nurses in the hospital and bring shame to my family. Despite all these challenges, I never lost my motivation to work toward achieving my dream in life. I always stood by my commitment"

Today, Sairam's dream has turned into a reality and she has now become a source of inspiration to thousands of women across Badakhshan. Because of her commitment and hard work, she climbed to the position of Program Coordinator and started leading the community midwifery school in Badakhshan. Sairam and hundreds of other graduated midwives left no stone unturned in providing quality maternal care to pregnant women in far-off areas of Badakhshan. During my stay in Afghanistan, I was always inspired by their work. Despite of resonant tribal culture and strong religious beliefs in Afghanistan, they walked on foot for many days to provide outreach health care services to hundreds of thousands of women in extreme remote valleys of Badakhshan.

So far, 109 students from 28 districts have graduated from Faizabad Community Midwifery School and are now working in remote villages of Badakhshan. Due to their untiring efforts, devotion, insatiable interest and everlasting commitment to their nation, all maternal and child health indicators have now improved in Afghanistan.I can state with certainty that the community midwives played a pivotal role in the improvement of maternal health care in Afghanistan. No doubt, there are still many areas in Afghanistan particularly in the province of Badakhshan where women still do not have access to midwives. The international community should continue to lend a helping hand to the people of Afghanistan and keep striving for a healthier tomorrow.