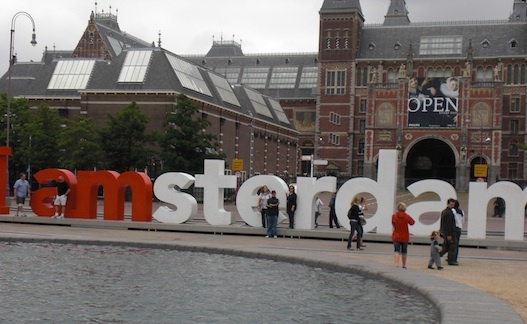 Let me start at the beginning.

We were on a tour bus in Amsterdam when the guide mentioned Hans Brinker.

"Who's that?" my daughter asked me.

"You never heard of Hans Brinker? The boy with the silver skates? The one who put his finger in the dyke?"

There was a pause as the kids looked at me in horror, then looked at each other and burst into the kind of obnoxiously loud, hysterical, can't-catch-your-breath laughter that is absolutely inappropriate in public places -- and impossible to control. 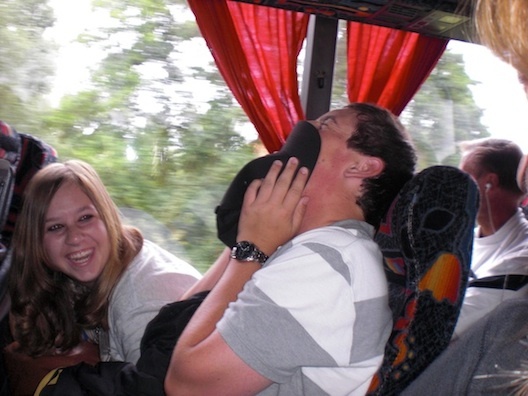 "Put his finger in the dyke?!" spurted my son, gasping for air.

"Oh, my God, you guys, you know what I'm talking about," I said, rolling my eyes and trying to shush them while the other passengers gave us dirty looks and my husband pushed his earbuds in deeper.

And so began another Mark family vacation.

You see, we are not your typical travelers.

While most people will tell you their vacations begin with the first stop on their carefully- planned schedule, that often becomes a quickly-forgotten prologue to ours. The real adventures -- the ones that end up defining our trip -- are rarely on our itinerary.

So, although we had already visited the obligatory sights -- the Anne Frank House, the Van Gogh Museum, the canal -- our trip to Amsterdam didn't really begin until the Hans Brinker incident.

When we finally got off that bus, overcompensating for the kids' rude behavior by overtipping the guide, we were relieved to find ourselves surrounded by coffee shops. "Just like Starbucks!" we sighed, already dreaming of the Dutch equivalent of a Frappuccino. We knew we had to get a drink for Sara, whose laughing fits always result in equally embarrassing hiccups, so we headed over to the one across the street.

On the way in, we were greeted by a lovely plant. We didn't really register what it was until we opened the door and were hit by the potent smell of marijuana. The kids' eyes lit up as they realized coffee shop was an Amsterdam euphemism for smokeshop -- and what people of all ages were smoking in there, openly and legally, was pot.

Uh, no. When we visited Rome, we hadn't let them fight each other in the Colosseum, gladiator style, had we? (Sadly, that's not a rhetorical question. I honestly couldn't remember, and I was afraid there was a chance we actually had.)

We turned them around and pushed them out the door, convinced they had already inhaled enough smoke to get high anyway.

Out of the mouths of babes. I solemnly nodded in agreement, while Michael and I telepathically high-fived each other, happy that this unexpected moment naturally offered a lesson that the kids would have probably rebelled against if we had tried to teach it ourselves.

Back outside, we decided to walk over to the Red Light District. Even though the kids were 12 and 14, we felt it was important to see it.

We were sure we had reached it when we saw the red lights. Duh. You can't fool us.

It didn't look like much was happening there but Michael took a picture of me in my best you-can't-afford-me hooker pose next to the red lights -- much to the amusement of the passersby.

That was the closest we came to seeing any action there because, needless to say, you can fool us. Half an hour later, we finally came across the infamous windows, behind which barely-dressed women were advertising their wares. There were signs all over the place prohibiting photography, and we knew we were in the right place.

I was strolling with the kids, and Michael was ahead of us when a prostitute -- a tall, thin, ebony-skinned beauty -- came bursting out of her window, wearing a red satin teddy and thong, click-click-clicking on the sidewalk with her stilettos.

"YOU BASTARD!" she screamed as she tore through the street with surprising speed.

"Wow, some guy must have run off without paying her," I matter-of-factly explained to the kids, secretly impressed that she could run like that in those shoes.

Just as I turned to see who she was chasing, she tackled Michael -- MY HUSBAND! -- and started pounding her fists into his back.

"WHAT'S WRONG WITH YOU, YOU BASTARD?" she kept screaming.

The kids' eyes were huge, Sara's hiccups were scared right out of her and I knew in an instant that Michael must have taken a photo of the woman while she was in the window. The thing about Michael is he tends to see rules as suggestions.

"YOU DON'T TAKE A PICTURE!" she yelled at him, continuing to hit him hard.

Ever the faithful wife, I piped up, "He didn't take any pictures." I was furious with him but wasn't going to let some other woman beat him up even if he deserved it. That was my job.

Sticking her finger right in my face -- or, more accurately, down into my face -- she looked me in the eyes and warned, "YOU SHUT THE FUCK UP."

"GIVE ME THAT CAMERA!" she demanded of my husband.

He held the camera firmly and rewound it to show her his last few shots. Somehow, while I had been heroically defending him, he had managed to get rid of the evidence.

"I only took a picture of the window," he assured her. "I'll delete it now."

"You can't go messing with our privacy," she hissed at him. "Our families don't even know we're here."

He apologized and she high-tailed it back to her window, click-click-clicking down the street until she was out of sight.

I was so angry at Michael, I was ready to hit him myself.

It didn't matter that he had erased that photo. I knew that the image that would forever be embedded in our kids' heads was of their father being beaten up by a prostitute. I also knew, though, that somewhere in there they had recorded their mother's loyalty and their father's acknowledgement of accountability.

And I realized that Alex and Sara would have very different memories of Amsterdam than pretty much anyone else who had ever been there.

Just like they do of many other places they've visited.

Although the family albums on our coffee table feature beautiful pictures of historic landmarks and famous sights, our kids' internal scrapbooks are filled with a random assortment of adventures that can't be found in any brochure. Adventures that come from living in the moment and taking the detours.

Like the time we let Sara gamble on a Mediterranean cruise -- and she hit a jackpot which she couldn't collect because she was under age. Or when Michael leaned over the rope barrier at the Hermitage in Russia, causing four guards to cock their guns in anticipation.

But those are stories for another time.

At a travel conference I attended, Keith Bellows, editor of National Geographic Traveler, proclaimed, "Passports are the new diplomas."

There is nothing more educational than travel. And nothing more powerful than the teachings that come when you stray from the lesson plan.

Follow Lois' travel adventures on Midlife at the Oasis.