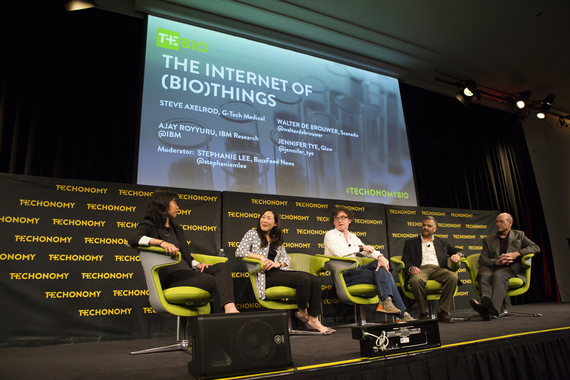 Whether by gathering data from your gut, your womb, or your head, new digital devices are designed to track wellness in ways that could transform how individuals manage their own health. Four leaders of the emerging "Internet of Bio Things" market joined Buzzfeed News reporter Stephanie Lee on stage at Techonomy Bio 2015 for a discussion about how they aim to improve consumer access to health data, and what will render that data more than just a curiosity, and truly useful.

Walter De Brouwer, founder and CEO of Scanadu, a NASA Ames-research center-based medical technology company, is competing for the Tricorder XPrize, which will be awarded to the device that can diagnose patients as well as or better than a panel of board certified physicians could. De Brouwer said Scanadu's mission is "to give 7 billion people access to quality healthcare on their smartphone." He said the handheld device, which takes measurements when the patient puts hand to head, could replace emergency room visits for checking vital signs or conducting urine analysis.

Steve Axelrod, a Ph.D. physicist who is CEO of G-Tech Medical, called his company's invention "an EKG for the gut." Patients wear the Bluetooth-enabled patch for three days. Connected wirelessly to a smartphone, it measures electrical signals from the stomach, small intestine, and colon, and could precede or complement CT-scans and colonoscopies for the early diagnosis of gastrointestinal diseases and disorders. The device, said Axelrod, can put data about the patient's GI rhythmic activity, strength, and frequency into a report that enables the physician to say, "this is where we think your pain is coming from and we can target treatment." He added, "We're turning data into something actionable."

Each of these technologies points to how "biology has steadily become an information science," said Ajay Royyuru, head of the Computational Biology Center at IBM Research. "Genomics is just the first frontier, but steadily we are transforming observational aspects of biology to be more and more data driven. That makes tech companies very excited about this transformation of natural scientific discipline into information science."

Royyuru described one IBM project that will analyze non-human DNA to impact human health. "We're looking at the microbiome as a portal into food safety," he said. "From where it is produced on the farm to how it is harvested, transported, packed, stored, and put on our table, the food--the ingredient--comes with the microbiome that surrounds it through all those steps ... through the entire supply chain."

The microbiome, he said, could serve "as a sentinel to tell us something has changed in that food" in order to detect contamination. "That's one example of how data-driven science is going to touch on all aspects of not just the science but how we consume," he said.

"How to make sense of all this data?" asked Lee. "That's the biggest challenge, said Axelrod. "You come up with a device or means of collecting the data, you see a signal, and the investor says, 'Nice. So what? How does this change what a physician does?'" If a technology does not hold the promise to influence the diagnostician's work some significant percentage of the time, then "it's just a nice science project," he said.

Royyuru agreed: "Translating data into actionable insight is what the outcome of all this analysis has to be."

Lee noted that the increasing availability of such devices will change the doctor-patient relationship. Tye said they could even give new meaning to the term 'patient.' Glow, she said, delivers targeted information to individual patients in a timely manner--before their doctor's appointment, for instance, or at a specific time of the month. "Based on their cycle and the data they're entering, we could flag polycystic ovarian syndrome or endometriosis," and suggest they speak to their physician about it, Tye said.

De Brouwer said his company's surveys of 100,000 consumers revealed that people want their own data on their own devices. "They want to go to the doctor with a point of view, and they want interpretation."

As consumers gain access to that information, the market for interpretation will grow, he said. Rather than disempower medical professionals, De Brouwer said, such a change would "elevate the doctor from blue collar to white collar" and improve the healthcare system's efficiency.