Some Internet providers, notably AT&T, are still not delivering the speeds they advertise to consumers, according to a new report by the Federal Communications Commission.

Internet providers often try to outdo each other by boasting that they deliver faster Web service than their competitors. Periodically, the FCC checks to see if the companies they regulate are telling the truth.

The FCC report issued Friday -- the third of its kind -- measured the actual Internet speeds delivered by the nation's major Internet providers during a one-month period last September.

It found that, on average, companies were delivering 96 percent of the speeds they promised to consumers. Customers who subscribe to Comcast and Verizon's FiOs service were even getting speeds faster than advertised -- even when demand was at its peak, which normally slows down service.

But the report also found that subscribers of AT&T, CenturyLink, Qwest and Verizon's DSL service were still not receiving the connections they were promised, according to the report. Here's a table detailing the commission's findings: 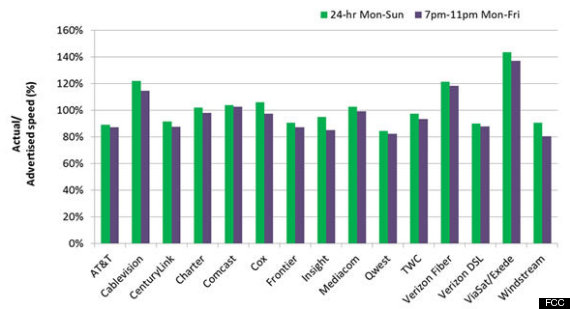 The FCC's "name and shame" reports, as they are sometimes called by industry experts, have led to improvements in years past. The first report, issued in 2011, found that Cablevision delivered about half the speed that it advertised during peak usage hours. The report released Friday found that Cablevision's speeds were now faster than advertised.

Internet speeds have become increasingly important to consumers as more of them are streaming videos online with Netflix and Hulu. The report found that a growing number of consumers are migrating to higher speed Internet service, willing to pay more to avoid the annoyance of waiting for videos to buffer and for large files to download.

While the FCC found several Internet providers were delivering the speeds they promised, those connections are still much slower than Google's ultra-high speed service. The company says Google Fiber offers broadband connections up to 100 times faster than what many Americans receive today. It is currently available only to residents of Kansas City, Mo., and Kansas City, Kan.

The F.C.C. report also measured, for the first time, the speeds of satellite Internet service, which many rural Americans depend on because major Internet companies do not provide service where they live. The report said the broadband satellite industry has recently launched a new generation of satellites that have "greatly improved overall performance" and found that consumers of ViaSat’s ViaSat-1 service were receiving speeds faster than advertised.

But the report did not mention that satellite Internet service comes with data caps that limit how many online videos customers can watch. Last year, residents of rural Mississippi told The Huffington Post about their satellite Internet service, complaining that it went down for several hours due to inclement weather or slowed to a crawl when they reached their data caps.

1 / 5
Korea
South Korea has long boasted some of the world's fastest and most accessible Internet. <a href="http://news.cnet.com/2300-17938_105-10012951-5.html" target="_hplink">More than 94 percent of South Koreans</a> have high-speed connections. In addition, the South Korean government has pledged to give its citizens access to 1 Gigabit per second Internet by the end of this year -- a speed <a href="http://www.nytimes.com/2011/02/22/technology/22iht-broadband22.html" target="_hplink">more than 200 times faster than the average household connection in the United States</a>. "South Korean homes now have greater Internet access than we do," President Barack Obama said during his <a href="http://www.whitehouse.gov/state-of-the-union-2011" target="_hplink">2011 State of the Union address</a>.
Getty