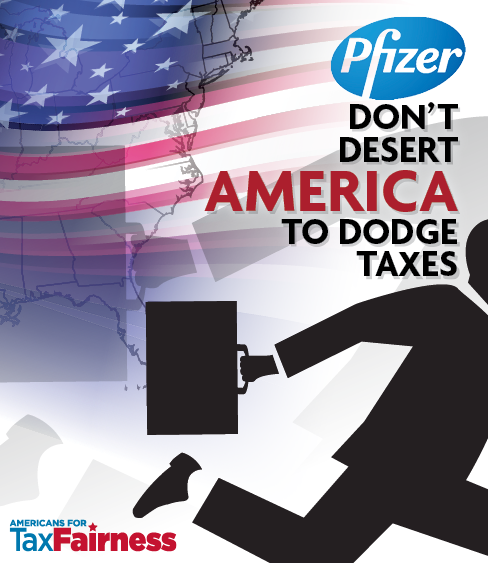 Pfizer doesn't play pfair. The recent announcement that it would renounce its American identity and become an Irish company -- thereby dodging billions of dollars in taxes -- is just the latest in a string of shady deals and sleazy behaviors by the pharmaceutical giant.

It is obvious Pfizer will go on taking advantage of the American people until we say no. This proposed international tax-dodging deal is a good place to put our foot down given Pfizer's corporate misbehavior:

So the maker of Viagra, Lipitor and ChapStick
made a dummy subsidiary the fall guy
, allowing the parent company to maintain
its billion-dollar-a-year business
with Washington.

The latest outrage--Pfizer's plan to turn its back on America after 166 years, claim an Irish identity but stay headquartered in New York City and thereby avoid billions in U.S. taxes--is perhaps the worst scam of all. It's an accounting trick multinational corporations have been pulling for years, but Pfizer's would be the biggest ever.

Failure to stop it will give a green light to Pfizer to keep misbehaving. It will encourage other huge corporations to dodge their U.S. tax obligations with the same kind of overseas stunt.

Of course, other big American corporations are already doing a pretty good job of not paying their fair share of taxes. Altogether, U.S. firms have more than $2 trillion in profits sheltered overseas--earnings they owe us taxes on, but are allowed to indefinitely put off paying until they are brought home. The unpaid tax bill now totals a staggering $600 billion.

Think about that giant pile of cash the next time you hear D.C. politicians claiming they don't have the money to fix roads, provide pre-school for toddlers or deliver warm meals to homebound seniors.

Pfizer and all the corporate deserters who came before (and will come after unless we stop them) want it both ways: all the advantages of being based in America without having to pay for any of it. Our schools, highways, ports, communications and legal systems have all contributed to Pfizer's success and will continue doing so. But after engineering this fancy address change, Pfizer will leave it to the rest of us to pick up its tab.

There's a remedy for this particularly egregious form of corporate tax dodging. Earlier this year, legislation was introduced in Congress to put a stop to so-called "inversions" and similar deals like Pfizer's. President Obama also wants the same kind of rule changes.

But thanks to the locust swarm of corporate lobbyists that descend on Capitol Hill whenever a favored tax break is in jeopardy, the bills have languished so far. Conservatives are doing their bidding.

Let's use Pfizer's latest outrage as an incentive to resuscitate reform. Now is the time to force Pfizer--and all of America's big-time corporate tax dodgers--to play fair with the American people. Pfinally.

Frank Clemente is executive director of Americans for Tax Fairness.