Imagine a perfectly flat veneer of pure white salt as far as the eye can see, in every direction. These otherworldly super-strange environments exist in only a handful of places on Earth; they're called salt flats (or salt pans), the leftover remnants of extinct seas.

In Western Utah, along Interstate-80 just before the Nevada State line, are the Bonneville Salt Flats, a 40 sq. mile ultra flat pan of salt. Everyday visitors have access to a world so strange, it can shock your sense of reality. 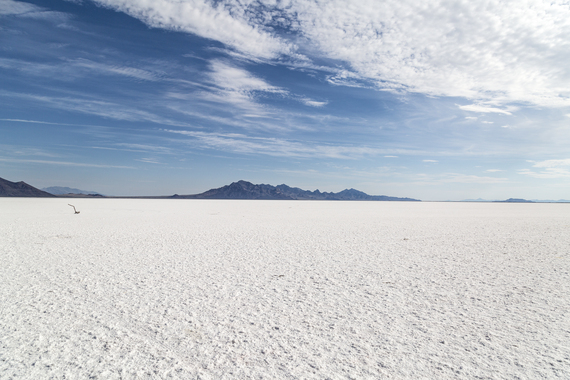 The surface in this image is solid, and you can walk out onto the salt pan, as far as the Silver Island Mountains if you want. Bonneville is public land, managed by the Federal Bureau of Land Management. 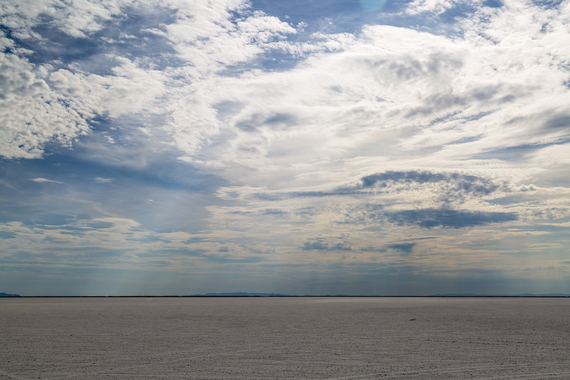 The flats go through seasonal changes where rainwater pools over the surface of the flats (winter/spring) creating a mirror-like shallow pool which eventually evaporates, leaving a reconstituted perfectly flat summertime salt-surface (pictured here). 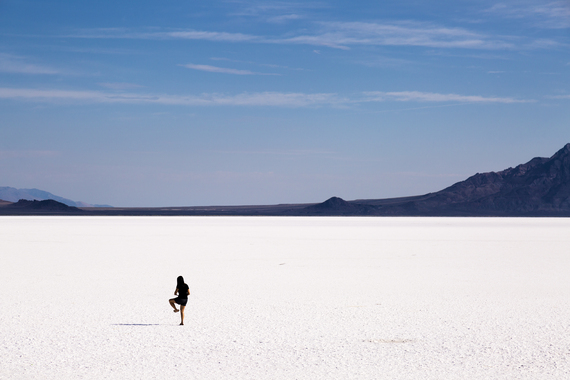 The experience of walking onto a solid salt surface is certainly unique. To some it can feel like a crust of 'ice' that could break at any time, and to others it's a crunchy surface of blinding light (bring your sunglasses on a clear sunny day). 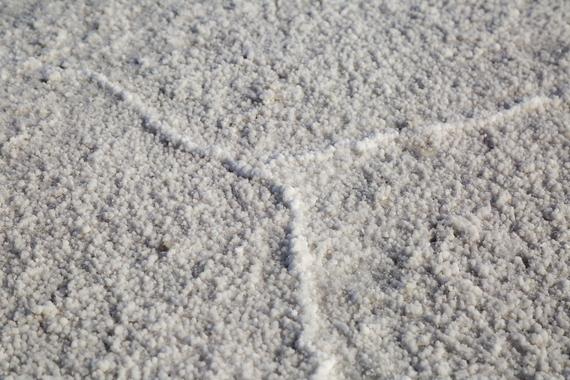 The white surface of Bonneville is made up of 90% NaCl (sodium chloride), with the remaining 10% consisting of ionic salts of potassium, magnesium, and lithium. What does this mean? It means that the same salt on your dining room table, the salt you put on your fries, is basically what constitutes the Bonneville Salt Flats. 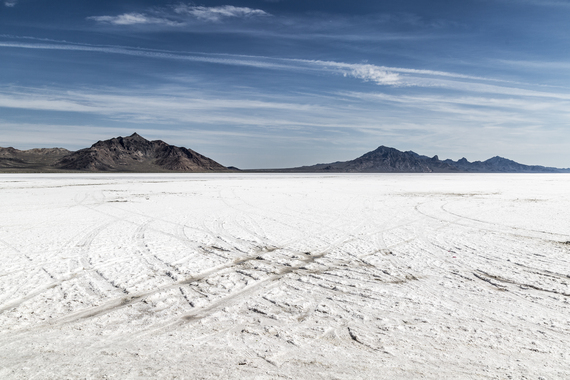 The Salt Flats are home to the Bonneville Speedway on the western edge of the pan. This speedway holds several unique distinctions: multiple land speed records have been achieved by motor vehicles racing through the flats, SpeedWeek is an annual event where drivers compete in high-speed contests in multiple categories, and has been in use for over a 100 years, since the first land speed records were set there in 1912. 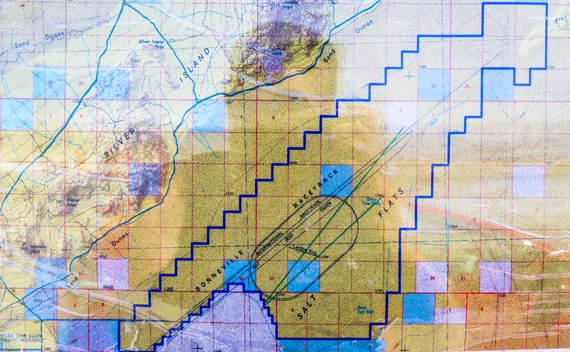 Each year the courses for the Bonneville Speedway are prepared anew on the reconstituted salt, usually a 10 mile straight track, and a 10-12 mile oval track. 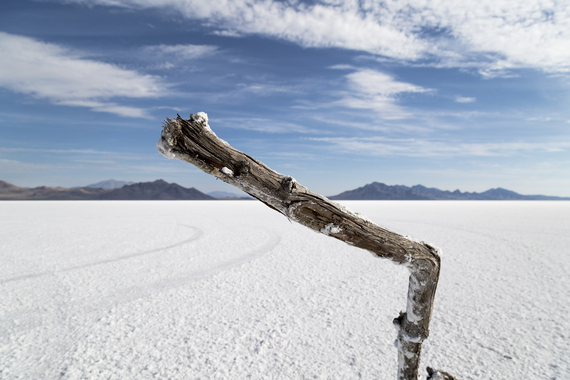 All life needs a measure of 'salts' to survive, but an extreme excess, means certain death. Plants (only the hardiest of the hardy) can be found at the periphery of the flats where enough soil is mixed with the salt to allow them to survive. In the center of the flats nothing can possibly grow, the solid crust of salt simply won't allow it. 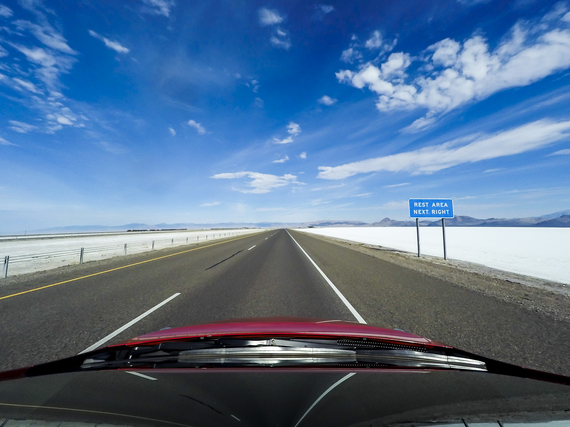 The easiest way to get access to the flats is from a clearly marked "Rest Area" off I-80, 10 miles to the east of the Utah-Nevada state line. There's a pullover stop on both sides of the interstate, however the images for this piece (and the best views of the flats) are from the north side. If you're traveling east, never fear, simply park on the south side pullover and follow the trail to the north side. 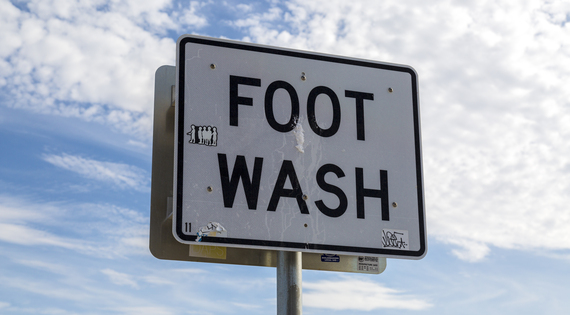 There's a 'foot wash' at the Bonneville Flats rest area for visitors to use once their playtime on the salt pan is finished. Make sure you use it! Salt has a tendency to find its way into and onto everything, and your electronics definitely don't want to have anything to do with the flats, the salt, or the residues on your shoes. 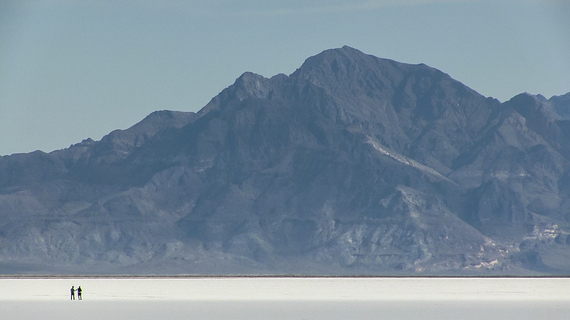 Hiking out onto the flats is a special, surreal experience; just remember to keep a GPS handy to find your way back, and definitely bring enough water for a day's use. Bonneville is a high desert environment and temperatures in the summer can easily reach 100°F. Overnight camping on the flats themselves is prohibited, but there are nearby campsites for those who wish to stay in the area. 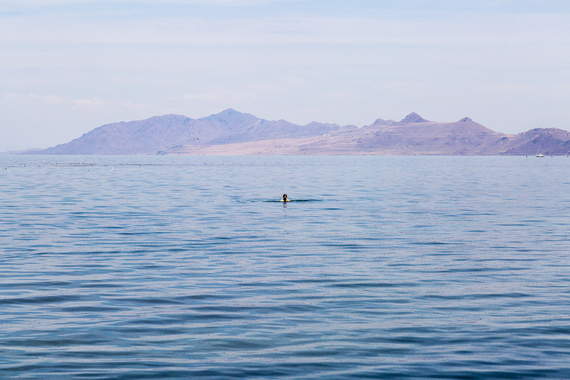 15,000 years ago the area around Bonneville would have comprised an enormous lake (approximately the size of modern day Lake Michigan) encompassing the I-80 corridor and the current borders of Great Salt Lake. Lake Bonneville shrank, evaporated, and dried over time to the landscape we see today. The Great Salt Lake remains as the only remnant of Lake Bonneville, a super-salty body of water with dimensions that vary considerably through the seasons. 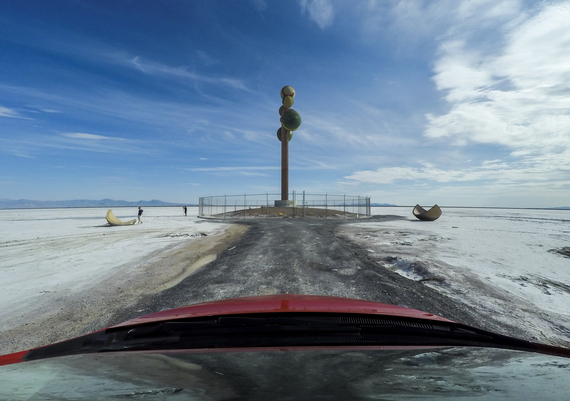 If you're traveling west along I-80 you'll see a tall, odd sculpture (it can look like an enormous bizarre telephone pole from a distance) to the north of the interstate just before you reach the flats. Swedish artist Karl Momen created Metaphor: The Tree of Life in 1986 and later donated it to the state of Utah. I'm a huge fan of public art, and it doesn't come in forms more isolated and unique than The Tree of Life. A fence surrounds the sculpture to prevent vandalism, and birds have been known to build huge nests between the balls.

If you want to drop some trivia at your next cocktail party, you can talk about the Great Basin of the United States. Bonneville sits at the eastern heart of the Great Basin; scientists call this an endorheic basin, a vast area with no drainage to the ocean. This means that all the precipitation which falls in the area of the Great Basin equilibrates through seasonal evaporation. What comes down, simply goes back up again. The Great Basin is vast, it's the largest continuous endorheic basin in North America, covering half of Utah, pieces of Oregon and California, and almost all of Nevada. The two major American cities in the Basin are Salt Lake City on the eastern fringe, and Reno on the western fringe. 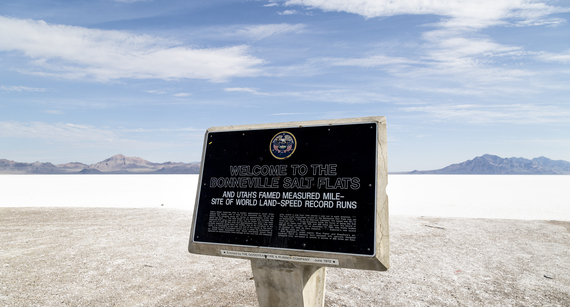 So if you find yourself on a road trip across Interstate 80, or if you need a fun and freaky getaway from Salt Lake City, make a stop at the Bonneville Salt Flats. You can't possibly miss them; even if you forget you read this piece, seeing the flats as you drive by will instantly bring back the memory. Check an online calendar for events taking place at the speedway.

Photographs taken by Kevin Richberg on July 4th, 2015 at the Bonneville Salt Flats outside Wendover, Utah.