Insofar as the prospective candidates for President of the United States pay attention to public opinion research, they should be careful about interpreting the polls on global climate change. They might get the mistaken impression that voters don't care.

Some politicians, polling organizations and media have been quick to jump to the conclusion that the American people consider global warming to be a low national priority. That impression is created especially by the polls that ask people to prioritize items on a list of national issues. Climate change almost always ends up near the bottom of the rankings along with closely related topics like energy and environment. Issues like the economy, jobs, the federal deficit, terrorism and public health are nearly always at the top. The result is a regular flow of headlines like these:

Most Americans Believe in Climate Change, But Give It Low Priority -- Pew Research Center, September 2014

Among all the ways that poll results can be distorted, two stand out in ranking polls. First, they force people to make artificial choices -- artificial because high-ranking topics like the economy, federal spending, terrorism, and public health cannot really be separated from the ubiquitous influences of the weather and energy. Ranking polls ask people to wander through an artificial stove-piped world that does not recognize the connections between issues. 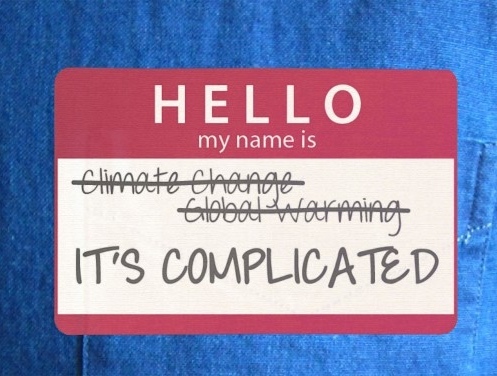 The evidence that people care more about climate change than the ranking polls suggest is found in other types of surveys. For example, the March 2014 Gallup poll I cited earlier asked people about their climate concerns in two different ways. When people were asked how much they worry about climate change compared to a list of other environmental issues such as water pollution and toxic wastes, only 34% picked global warming. When they were asked about climate change alone, 56% of respondents said they worry a great deal or a fair amount. Those percentages are the difference between winning or losing an election.

The second problem is how results are reported by pollsters and the media. Because the media love to report conflict and because pollsters want good coverage, both are inclined to create an impression of controversy even when controversy isn't the real story. The Gallup poll provides an example again. Although 56% of the respondents said they worry about global warming, the headline on one of its other stories about the poll read, "Americans Show Low Levels of Concern About Global Warming".

In 2013, a survey by the Public Policy Polling group showed that 51% of the registered voters who participated said they believe global warming is not a hoax. The headline above the Weather Underground's story about the poll read, "3 in 8 Americans Believe Global Warming a Hoax".

A published analysis of newspaper reports on climate polls in the UK found a similar pattern of mis-reporting. The conclusion of the researcher, Corina Hoppner at Oxford University, was: "If the aim is to provide a fact-based platform for public opinion, journalists and all authors involved in the production and media representation of opinion polls should adopt a more critical and careful approach."

The best way to read what's on the American public's mind is to look for consistencies in the results of several scientifically valid polls taken at around the same time -- with the exception of ranking polls, whose flaws are imbedded in their design. Today, a significant number of surveys show that large majorities of the American people say they consider global warming to be an important issue that requires government action.

For example, a survey in January by the New York Times, Stanford University and Resources for the Future found that two-thirds of respondents including 48% of Republicans said they are more likely to vote for political candidates who campaign on fighting global warming. More than two-thirds, including 48% of Republicans and 72% of independents, said they were less likely to vote for a candidate who agrees with those who claim that climate change is a hoax.

The Yale Project on Climate Change Communication reported last month that significant numbers of Republicans accept that global warming is underway, including 62% of moderate and 68% of liberal members of the GOP. Yale found that 56% of all Republicans support regulating carbon dioxide as a pollutant.

Just last week, Reuters reported that it conducted a poll after Pope Francis warned there would be moral consequences if we fail to act against climate change. Two of three respondents said that they and world leaders have a moral obligation to reduce greenhouse gas emissions.

As I look over the opinion research of the last two years, the weight of evidence tells me that the big ideological divide on energy and climate issues among elected leaders in Washington does not exist in the rest of the country. Solid majorities of climate skeptics are found only among members of the Tea Party, the group that has intimidated many more moderate Republicans into climate denial or silence.

If they read only the ranking polls, the men and women considering a run for the presidency might conclude that they can avoid talking about climate change in this election cycle. That's what the candidates did during the 2012 campaign, when climate change went virtually unmentioned. None of the moderators of the presidential debates even bothered to ask about it.

It is less likely the candidates will get by so easily this time, nor should we let them. We've seen unrelenting weather weirdness and more conclusive climate science since 2012. Last year was considered relatively calm in the United States, but there still were more than 100 weather disasters consistent with climate change. They killed 220 people and caused more than $24 billion in losses.

Whatever their views or their party affiliations, voters should insist that the presidential candidates be clear about whether they would address climate change and how, should they be elected. We have a right to know and they have an obligation to tell us. Their answers could prove interesting. Several of the Republicans testing the waters right now acknowledged in the past that climate change is real, but have since changed their minds. Some are trying to stay silent on the issue. The polls indicate that Republican voters are not monolithic in their views. One analyst from the conservative American Enterprise Institute sorts them into three categories: deniers, skeptics and people who want action.

The only polls that count, of course, are those conducted every two years at the ballot box. And as we know, what people say in polls may not be consistent with how they end up voting. But as we begin the 2016 presidential campaign season, the candidates would be unwise to assume that the American people think climate change is a low priority.

As for the rest of us, there should never again be an election, presidential or congressional, primary or general, in which we allow the candidates to slip by without being specific and frank about their positions on issues this important to the nation's future.

The Presidential Climate Action Project is a nonpartisan privately funded think tank that focuses on options for federal leadership on climate and energy, particularly by the President and the Executive Branch.