Saving millions of lives from AIDS is most certainly in our reach, according to Bill Gates -- we just have to up the resources aimed at ending the virus.

In a blog post published on Wednesday, the philanthropist wrote about recent findings by the Lancet Commissions that found 21 million lives could be saved by 2030 "if the world accelerates the fight against HIV/AIDS."

Gates -- who pointed out that the figure roughly represents the population of Australia -- highlighted the immensity of such a prospective accomplishment.

"If you found out that a plague was going to wipe out the entire population of a city or country tomorrow, you would want the world to do everything possible to save their lives," he wrote in the post, "An AIDS Number That’s Almost Too Big to Believe." "Although preventing 21 million AIDS deaths is on a different time scale, morally there is no difference. It is just as pressing."

Research by the Lancet Commissions, which was funded by the Bill & Melinda Gates foundation, found HIV/AIDS prevention and treatment will save lives while also pulling people out of poverty. 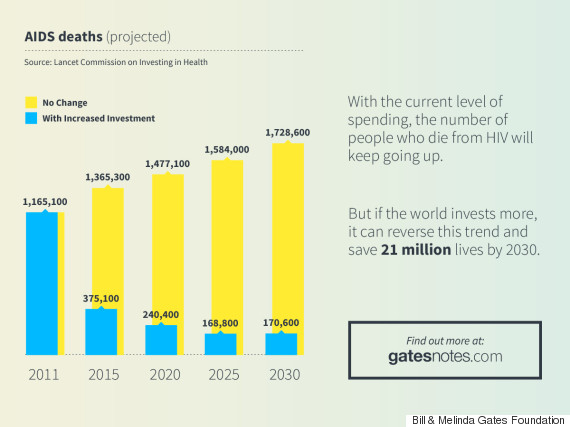 There's significant progress to be had when it comes to combating HIV/AIDS. There were 35 million people living with the virus in 2013, and it killed about 1.5 million, according to the World Health Organization (WHO).

As Gates pointed out in a bar graph, HIV/AIDS is projected to kill more than 1.7 million people in 2030 if current levels of spending on treatment and prevention methods continue.

The philanthropist, however, is hopeful increased awareness -- and as a result, funding -- for HIV will bring "unprecedented progress" to the fight in the coming years.

But the fight against AIDS isn't alone -- the next 15 years will be hugely important regarding a variety of global health and development issues, according to Gates.

In his 2015 annual letter, the billionaire predicted that "the lives of people in poor countries will improve faster in the next 15 years than at any other time in history," pointing to innovations boosting economic opportunity, substantial progress in terms of food production and reductions in child mortality as reasons to be hopeful.

It's a prediction that goes hand-in-hand with recent findings by the United Nations. U.N. Secretary-General Ban Ki-moon said in March that "the world is currently reducing under-5 and maternal deaths faster than at any time in history," Reuters reported.