President Obama, who has been called "the most tech-savvy president," has over six million Twitter followers and more than 17 million people are "fans" of the president's Facebook page.

However, a large audience is not necessarily an active audience.

Though fewer than 640,000 Facebook users have "Liked" former President George W. Bush's Facebook page, these users tend to interact more with posts than fans of Obama's page do, according to a new report.

Engage, a political analysis and strategy agency focusing on new media, reports the following statistics from a study of popular Facebook posts:

On average, President Obama's last 10 posts have been liked an average of 11,579 times, to Bush's 6,655 times. That works out to more than 1% of Bush's fan base interacting with his page on any given post. For President Obama, it works out to a pretty weak 0.07% fan interaction rate -- and a 13-fold advantage for Bush on that score.

In addition, Engage's study found that Sarah Palin's Facebook fans also demonstrated disproportionally high interaction rates when compared with Obama fans. "[Palin] comes close to besting him [Obama] in raw 'Like' counts -- seeing an average of 9,444 Likes per post off a fan base of just over 2.5 million," according to Engage.

On the other hand, posts on Obama's fans page tend to accumulate more "Likes" than posts made on the Starbucks page (well over 18 million fans) and the official Facebook page (nearly 30 million fans).

View a chart of the data (below) and tell us if Engage's findings surprised you. Then, view our slideshow of the most influential tweeters. 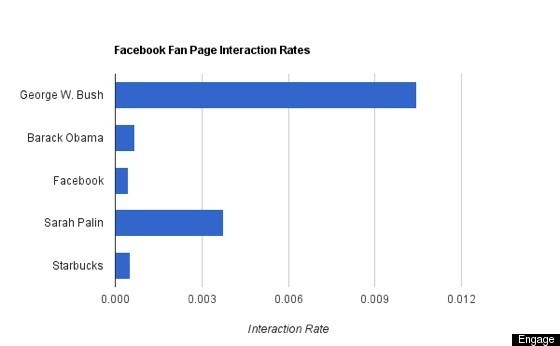