The photograph is not easy to look at, and it's not clear at first glance if Millicent Gaika, the woman in the photo, is dead or alive. Huge purple bruises surround both of her swollen eyes, and her neck is crisscrossed by a number of open gashes and scars. By now the bruises have subsided, some of the scars have healed, and in court testimony in November Millicent was able to tell a judge about how the man who raped her said, "I know you are a lesbian. You are not a man, you think you are, but I am going to show you, you are a woman." That man, Andile Ngoza, is now out on the streets, despite being released and re-arrested after the attack on Millicent. His bail this time, for violating the terms of his parole, was set at 60 Rand, or just under $10 USD.

"To use a very South African term, I was just so hurtful," Billi du Preez, a volunteer activist with Luleki Sizwe, tells me. Luleki Sizwe, a small, all-volunteer group that campaigns for LGBT people, is based in Capetown's mostly poor black townships and rural areas. The organization works with and supports women who have been victims of what has fast become a ubiquitous form of targeted sexual violence in South Africa: "corrective rape" against gay women or women suspected of being gay, as a form of "curing" them. The most disturbing thing about the attack on Millicent is not how rare it is in South Africa -- but how common. The organization itself is named after two women who were killed from "corrective rape"-related health complications. One of those women was the fiancé of the organization's founder, Ndumie Funda. 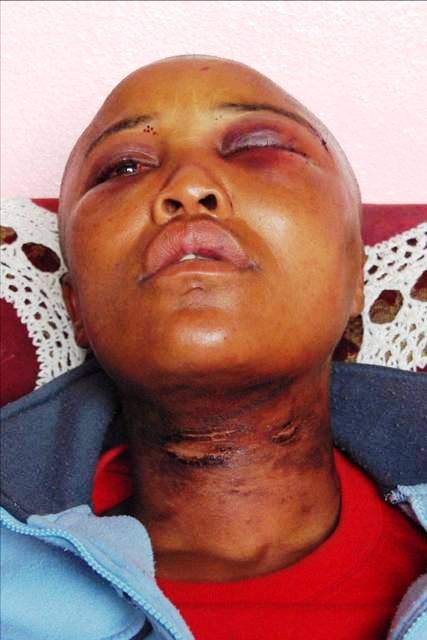 "These crimes have been going on for years already, and we haven't been getting anywhere," says Billi. "Millicent's case has been put off and put off. When the perpetrator, who's running free, started threatening Millicent again, I decided enough is enough."

After years of rallying, marching, and local organizing by members of Luleki Sizwe, what Billi did next was take a shot in the dark. She drafted text to accompany the photo of Millicent's battered face, and a few weeks ago sent it in as a petition to Change.org, a popular social action platform, demanding that the South African Ministry of Justice declare "corrective rape" a hate crime. What happened next took her, and many others, by surprise. Within a matter of weeks, the petition has garnered over 130,000 signatures from almost every country in the world and is growing quickly, making it the site's most popular petition to date.

More importantly, it did the one thing that local organizing had seemingly failed to accomplish -- it got the attention of the national media in South Africa, and functionally crashed the email servers of the Justice Minster Jeff Radebe, to whom the petition was addressed, and whose chief of staff complained that, "you have made it virtually impossible for us to access other emails as doing so is like looking for a needle in a haystack."

While it's far too soon to declare victory (to date the minister of justice has not even agreed to a meeting yet with activists from Luleki Sizwe, one of their number one demands), the campaign has resonance far beyond how many of its ten demands are met, and should be closely watched for a number of reasons. The news went viral: the speed with which it was shared on Facebook and email networks around the world points to a growing international constituency for LGBT rights. And the campaign offers a powerful lesson about the capacity for local activists, often with very minimal resources, to quickly reach a broad international audience through smart online organizing.

"What's remarkable with this campaign is how it highlights the discrepancy between perceived power and real power," Ben Rattray, founder of Change.org, tells me. "Speaking of global power dynamics, there aren't that many people who have less power than these women. These are poor, black, lesbian South African women. But given the compelling nature of this story, the potential for it to resonate with millions of people around the globe, and a mechanism to connect with those people, their potential power is remarkable."

As far as tactics go, an online petition drive may seem like a feather as opposed to a club, given the gravity of the issue. It wouldn't be a stretch to imagine Malcolm Gladwell poo-pooing such forms of activism, given his much debated skepticism of social media's ability to bind activists together beyond very tenuous and "weak tie" relationships. Indeed most moderately political people, at least in the U.S., probably sign at least one petition a week that passes through their inbox, given the ubiquity of the tactic. And more often than not news of a petition's effectiveness (or lack thereof) is never relayed by the sponsoring organization. But "tipping point" moments are by definition hard to predict, and what any good organizer, online or offline, will tell you, is that those fleeting "weak tie" relationships are often just a first step, an entry point in to a more engaged stance on an issue or a deeper relationship with a community of interest. The secret that's not so secret is that "organizing" is the operative word in "online organizing," and always has been.

After all, the "corrective rape" story has actually been in the news for a while now, and recent highly publicized research has lent shocking evidence to claims that women's groups in South Africa have been making for years -- that the country is the rape capital of the world. But as of last month it is likely that few people outside of South Africa, and probably just as few within South Africa, knew much or anything about a group of women in Capetown called Luleki Sizwe. Fast-forward a few weeks, and now a hundred thousand people around the world (and growing) do know. And unlike the mediated one-way access to an audience that press coverage offers, the women of Luleki Sizwe now have a way to communicate directly with their supporters, engaging them further on the issue and on the acceleration of tactics over the coming days and weeks -- to force the South African government to finally get serious about combating the scourge of "corrective rape." If you haven't yet, sign the petition, and you will most definitely hear more from these women, as it doesn't look like they are easily bowed.

"It's important to feel that you are not alone anymore, just two or three little voices in Capetown," says Billi du Preez. "It gives hope. Instead of being little mouse voices in the wilderness, we're going to be lions now, and we're going to be roaring as loud as we can."

This article originally published at Alternet.