I have known and admired Didi Menendez for many years, and was a fan years before I knew her. She has been publishing art magazines for a long time. She curates with limitless energy and creativity, and showed a friendly eye to figurative painting at a time when it still had few friends. In the course of her work, she has created a loose-knit global community of thousands of artists, art world professionals, collectors, and art lovers. She is the living heart of something special.

Every once in a while, Menendez names a theme and asks artists to run with it.

Chévere is such a project, identified only as work "inspired by the Romance Languages of Latin America" (Menendez herself is a Cuban expatriate - her family fled Castro when she was a child). The project, curated by Menendez and collaborator Sergio Gomez, manifests as an issue of Menendez's Poets/Artists magazine, and as an exhibition at Sirona Fine Art in Florida, and online as an Artsy show. Some of the artists are from Latin America, others not. Therefore some of the artists draw on memory and experience of their own countries and peoples, and others on their encounters with cultures foreign to their own, and others still on imagination and images cobbled together from film and art and literature. The project becomes a great act of communion and empathy, a celebration of being together.

Like the vast cultural and geographical territory of its subject matter, Chévere does not come down to one idea or moral. Resonances arise between artworks, sometimes by chance and other times by cultural affinity. No point is driven home; this is not a synthesis but a mosaic. Let me appreciate a few of the pieces with you, and recommend that you check out one form of the project or another to enjoy the rest of them. Poems and writing by Joe Amato, Ana Menendez, Nin Andrews, Grace Cavalieri, Ivy Alvarez, and others are included in the magazine and PDF formats of the project as well. 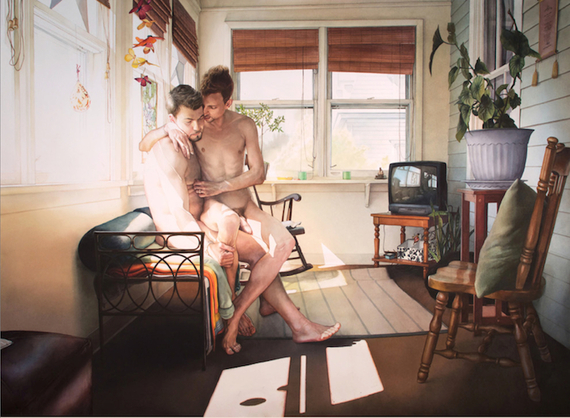 Reuben Negron, a Latino artist raised in a white community, has struggled over the years to distinguish an authentic sense of his Latino heritage from ideas about it derived from his surrounding culture. As a human being, he continues to work toward a serenity he has long since reached in his artwork. His watercolors evoke scenes of luminous, sunlit domesticity. They have the stillness of home, of being at home. His people are generally caught in scenes of the eroticism of those well along the path of commitment to life together. In Chris and Mario, a couple fools around on an enclosed porch. The uncurtained windows expose them to public view, but their focus and activity are private. They are, of course, gay, transgressing against expectations of masculinity which Negron does not find authentic to his experience of Latino-ness. They are lost in each other, and in the enjoyment of a vivid present. Negron evokes this overwhelming, ripe present with his eye for detail, his patient and loving observation of those tiny elements which make a scene recognizably itself: the reflection of windows in the curved glass of a television screen, the exact shapes of wooden furniture legs, the cool shadows of a plant pot, the different lusters of various cushions, the rippling of an old rug. The scene is anchored in the minute, the specific, and the real, and this anchoring liberates its emotional core to represent any such scene among lifetime partners glimpsed in their home. 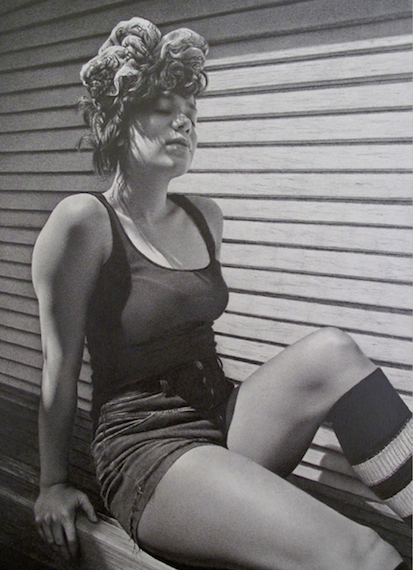 Tanja Gant's Ensueño addresses the subject of the project at the level of the flesh. There is nothing more European, more "white," than Gant's painstakingly invisible pencil marks, or the pose of the model, evoking a crouching Aphrodite. The application of this image tradition to the girl at hand integrates her into that tradition. The drawing, therefore, is a celebration of using the eyes one has to see new things - that the many peoples of this Earth look different from one another, and to love from one family to the next, it is first required that one learn to see. With her meticulous pencil, Gant teaches herself to see the golden flesh, the curves and athletic power of her young subject, drenched in the sun, ready to take flight. Seeing, Gant comes to know who she looks at, and to adore her. 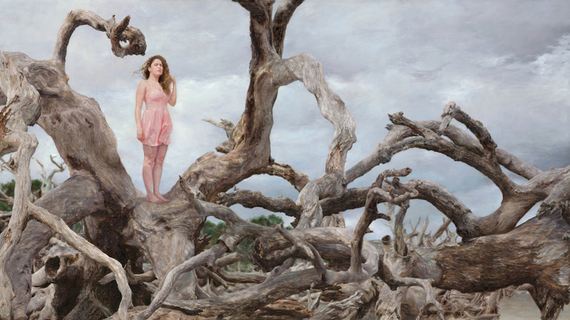 Omalix, born in Venezuela and living in Florida, paints a painting here that impresses on me that I do not know anything at all about chévere, about Latin America or its romance languages. A woman stands in front of a moody sky upon a field of twisted branches. There is something gorgeously dramatic about this, full of portent - it's a cliffhanger of a painting. Nothing about it tells me to think of that tremendous landmass stretching across half the world, so far south of where I sit in New York City. It is a scene for me outside of place and time, an invocation of a facet of the absolute human condition. I think this is part of Menendez's point with her project as well - that to delve far enough into art "inspired by the Romance Languages of Latin America" is to find that every preconception one has is incomplete or irrelevant, that one must start fresh and be open to the impossibility of any ultimate synopsis. 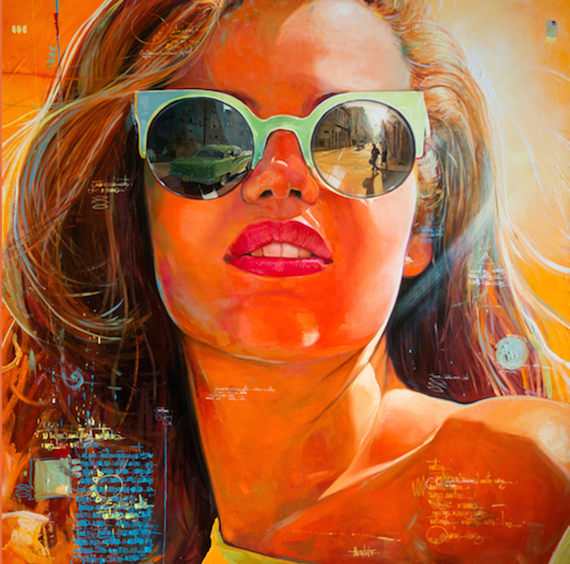 Other paintings do evoke the things I think of when I try to consider this subject. Is this painting, with its vivid oranges and sharp brushwork, its hard light and bright shadows, depicting a fashionable woman with full lips and square jaw, a city street with its antique Studebaker reflected in her jade-framed sunglasses - any less true because it is the exact truth I can imagine? Similarly, is Jules Arthur's Afro-Cuban man, so thrillingly natty in dress, so proud in his direct gaze, in his environment of saturated blues and rusts and yellows, any less true because I have already learned to treasure faces and colors like them from The Buena Vista Social Club? 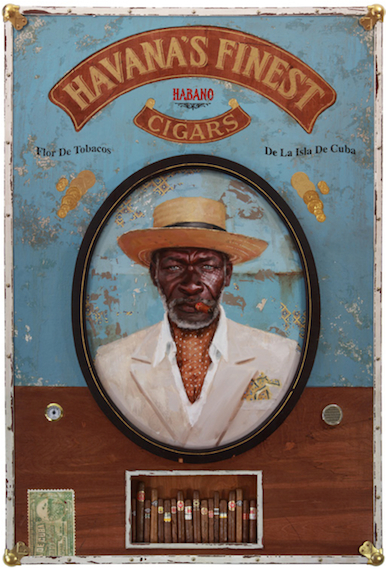 Of course not. They are all true. This is what makes Menendez the curator she is: she is willing to recognize and embrace a thousand truths, demanding nothing of her artists but that they offer her the best they have to give.

More pieces from this splendid compilation below, with a couple notes of my observations - many more pieces are not included, but are well worth looking at for yourself by clicking the links at the bottom. 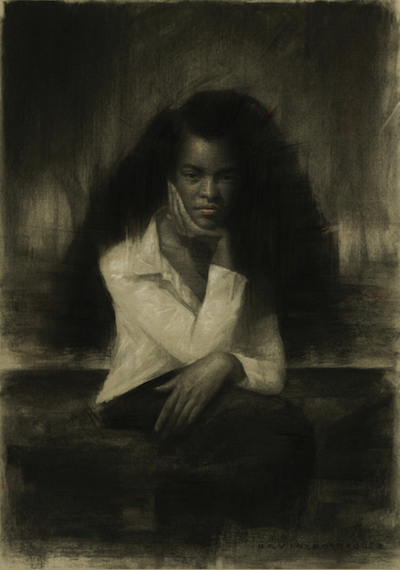 Consider this piece first as a purely formal composition of values, light to dark. It is expertly focused, and its drama first arises in the many sharp and conflicting diagonals. Then allow yourself to see what it is a picture of: a woman sitting, lost in thought. The subject, so seemingly peaceful, virtually erupts. Her thoughts cannot be peaceful, this is a furious image. 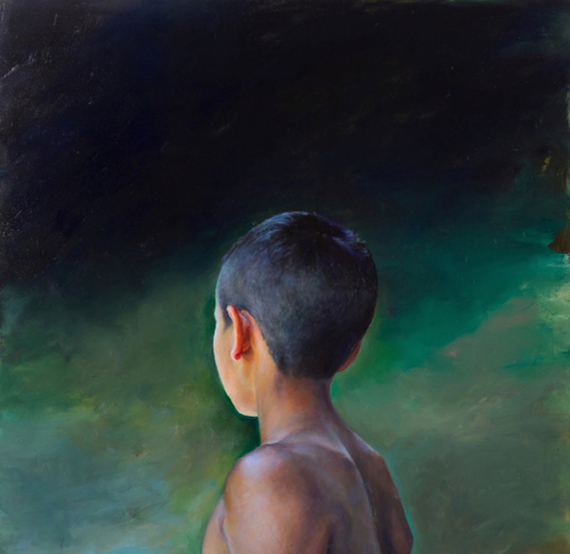 A prepubescent boy faces away from us. We can tell his ethnicity from his hair and coloring, but his story is the story of all boys growing up: shirtless and cocksure, turning away from what they know, facing toward the uncertain world - and, set against that vast uncertainty, revealed again as terribly young, fearfully vulnerable. There is nothing for them but to take the first step and accept the risks. This is how we grow. 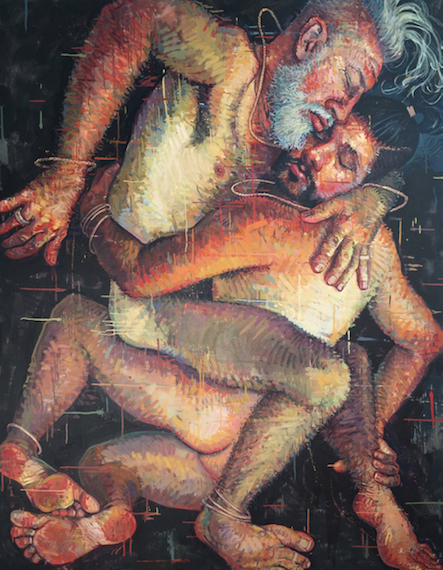 Cherry's couple here seems constructed out of music, each brushstroke a beat, the figures dynamically charging across space like those found in Inca or Aztec art. Cherry's work is virtually consumed with the translation of hectic rhythm into fixed images, while his subjects have a Whitmanesque acceptance of themselves in their hairy and imperfect glory. 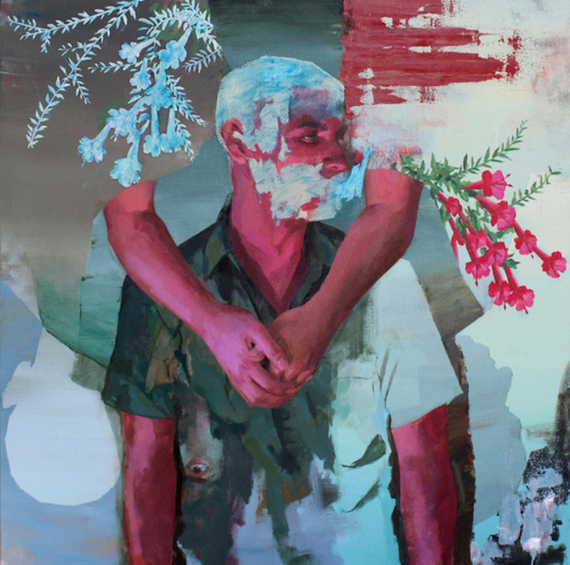 This is a bewitching composition, its full and empty figures, its aquas and magentas, orchestrated to produce a shifting, uncomfortably flattened space. Consider the menace of the erased mouth, the uncanniness of the upside-down eye hiding in the shirt. 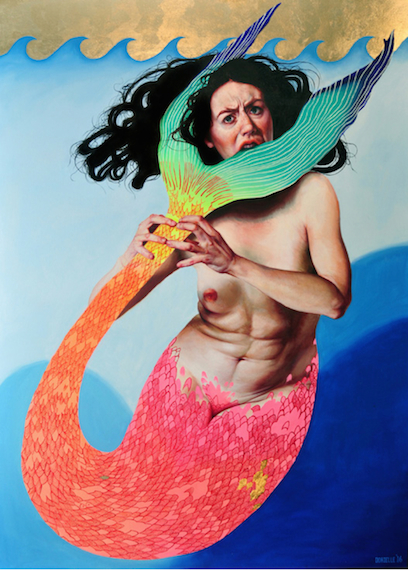 One of Caimi's recurring themes is the anxiety attendant on being a woman. What makes her special is how funny she is about it. Here, her distracted, soft-bellied mermaid gnaws at her own tail, a shocking - and therefore funny - image for all of the forms of self-attack and self-mutilation women carry out when their ideas of their bodies become unacceptable to them. 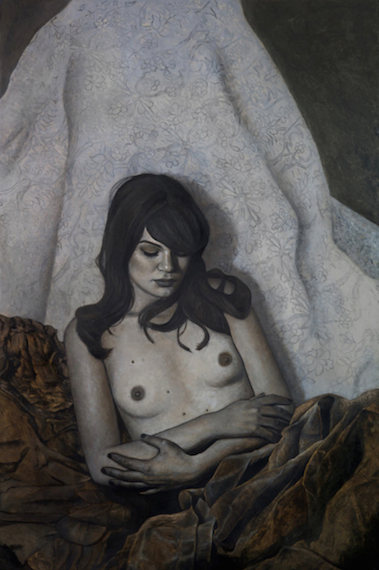 This may make more sense to the artists among you, but this painting enters into a rare and special zone. Looking at it, I initially found myself wondering if the dropoff in light from chest to forearms was plausible, if the fingers could be that dark. I wondered if that vertical line down her chest was anatomically valid. I bounced back and forth between what I was looking at and what I know. And I could not answer the questions. Her observations could be true observations. What is special is that it doesn't matter. As with Mannerist art, Ospina's depiction becomes weightless. It need not be true, because it is right. It is everything the painting wants and needs; it would be diminished if it were invisibly correct, and also if it were painfully incorrect. It is what it is, a painting that is its own universe.