Could there be enough "overwhelming" evidence against Chevron to merit a payment of over $100 billion? Tens of thousands of Ecuador's residents are the plaintiff in an environmental damages lawsuit against Chevron, and they believe the evidence speaks loud and clear, which is detailed in the first part of the final written argument against Chevron recently released by the Amazonian communities' lawyers.

Chevron ran several oil fields in Ecuador until the early 1990's -- Petroecuador, a state-owned oil company, took over the oilfields in 1992. The plaintiff claims that in the time that Chevron operated the oil fields, it disastrously harmed both the environment and human health.

The plaintiff believes that Chevron intentionally disposed of billions of gallons of toxic waste by dumping them into rivers and streams. They also argue that Chevron spilled thousands of oil barrels, built and abandoned 900 toxic waste pits, and ordered the destruction of oil spill records. It is possible that the company could be liable for up to $113 billion, according to plaintiff damage assessment reports.

Meanwhile, Chevron argues that Ecuador's contamination cannot be linked to its operations in the country. At the same time, they argue that any contamination that had existed was cleaned up during a past "remediation," and thus, any remaining contamination is Petroecuador's responsibility.

But plaintiff spokesperson Karen Hinton believes that the submitted scientific evidence "proves overwhelmingly that Chevron is responsible for what is widely regarded as the world's worst oil-related disaster."

Photos and captions below, courtesy of the Amazon Defense Coalition, show some of the alleged devastation that Chevron is being sued for. 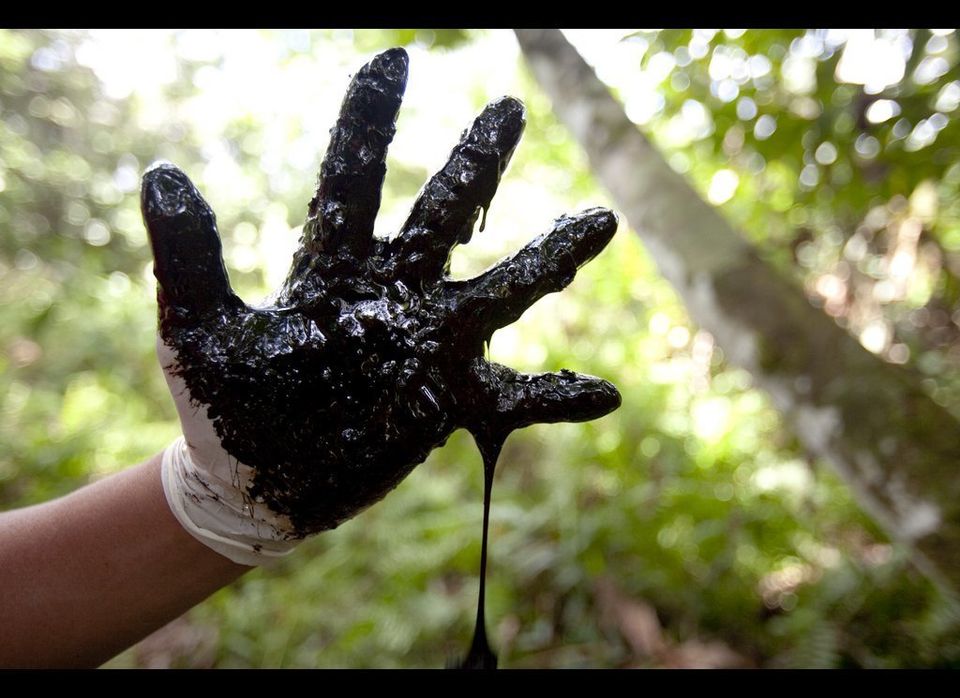 1 / 8
A hand covered in crude from an open toxic pool in the Ecuadorean Amazon rainforest near Lago Agrio. Flickr/Caroline Bennett/Rainforest Action Network