"Snippets" of legislative history are not a reason to "tar the political branches with the brush of bigotry," Chief Justice John Roberts wrote in his dissent in United States v. Windsor, supporting the Defense of Marriage Act (DOMA). Chief Justice Roberts is right: Snippets are not enough. That is why he used the word. One may dismiss snippets. They demean history and the decades-long animus toward gay Americans coursing through American politics. Chief Justice Roberts could have risen above "snippets" to look at congressional history itself.

"Mr. Speaker, it came to my attention last fall that the District of Columbia government had granted a society of homosexuals a license to solicit charitable contributions in the District of Columbia," proclaimed U.S. Rep. John Dowdy (D-Texas) on July 5, 1963, according to congressional records. "This license was issued to the Mattachine Society of Washington, and at that time, the Superintendent of the License and Permit Division stated that his office had no legal authority to deny such a permit to any non-profit organization which complied with all the requirements of filing for same."

Rep. Dowdy was reacting to a headline in The Washington Star -- "Group Aiding Deviates Issued a Charity License" -- and decided it was time to act. The Star was reporting on the fallout of a letter of introduction that Dr. Franklin E. Kameny, co-founder of the Mattachine Society of Washington, had mailed to members of Congress and his intention to solicit funds for the new organization in Washington. 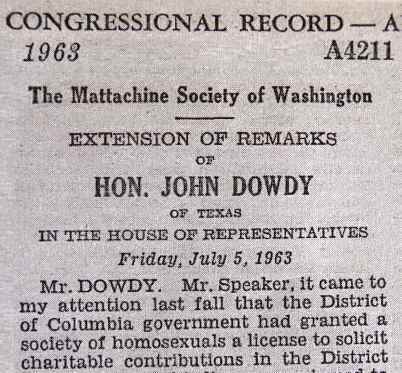 Rep. Dowdy held hearings on his bill 50 years ago today, on Aug. 8, 1963, to revoke the nonprofit status of the "society of homosexuals" organized by Kameny. As chairman of a House Subcommittee on the District of Columbia, Rep. Dowdy invited Kameny to testify with characteristic animus. "The acts of these people are banned under the laws of God, the laws of nature, and are in violation of the laws of man," Rep. Dowdy declaimed on the House floor. "I think a situation which requires them to be permitted a license to solicit charitable funds for the promotion of their sexual deviations is a bad law, and should be changed forthwith," he said.

Fifty years and a single lifetime later, Chief Justice Roberts wrote his dismissive dissent: "I would not tar the political branches with the brush of bigotry" using "snippets." The Dowdy episode is no "snippet." It stands today as an evidentiary reminder of just how deeply runs the vein of anti-gay animus in Congress.

The Dowdy hearings put the Mattachine Society of Washington on the map and invented Frank Kameny as a leader. "We are not a social organization," Kameny thundered. "Our Constitution states, 'It is not a purpose of this organization to act as a social group, or as an agency for personal introduction.' We abide strictly by this prohibition." This was the first time a "self-avowed" homosexual had ever testified before a committee of Congress. "We are not interested in recruiting heterosexuals into the ranks of the homosexual -- an impossibility anyway, despite popular belief to the contrary. Our primary effort, thus far, has been an attempt to alter present discriminatory policy against the homosexual minority."

Despite Kameny's forceful testimony and what he later said was The Washington Post's "first pro-gay editorial," the Dowdy bill targeting the Mattachine Society of Washington passed the House of Representatives after a short debate. Clearly unconstitutional, it died among cooler heads in the Senate. Today, among the Kameny Papers at the Library of Congress is a note to Kameny from Rep. Paul C. Jones (D-Mo.). Jones had received Kameny's letter of introduction. Jones returned it with a handwritten note: "Please do not contaminate my mail with such filthy trash." Rep. Charles Chamberlain (R-Mich.) wrote a nice one: "In all my six years of service in the United States Congress, I have not received such a revolting communication".

In Rep. Dowdy Frank Kameny had at last found a visible antagonist and his own personal moment. Decades later he reflected before a student audience: "We registered, and this got Rep. Dowdy of East Texas all upset ... but we had a two-day hearing with the media there, and we made the most of that!"

When Rep. Dowdy retired from Congress in 1973 under indictment for bribery, and went to prison for perjury, Kameny well recalled his opportunity to testify that day 50 years ago, not against a "snippet" but for a new movement.