When Chinese President Xi Jinping announced in September 2015 that China would, together with the United States, work toward a complete domestic ban on ivory, it was a welcome step in the fight against elephant poaching. Yet it was also only the first step in a long road. Now comes the difficult process of deciding how to make the ban happen.

Ivory from the slaughter of some 30,000 elephants a year often winds up in the key markets of China and the U.S. A 2014 report found that China is the largest importer of illegal elephant tusks in the world, based on seized shipments.

Because this contraband finds its way into China's legal ivory market, shutting it down completely is seen as a vital step toward eliminating the illegal killing of elephants. 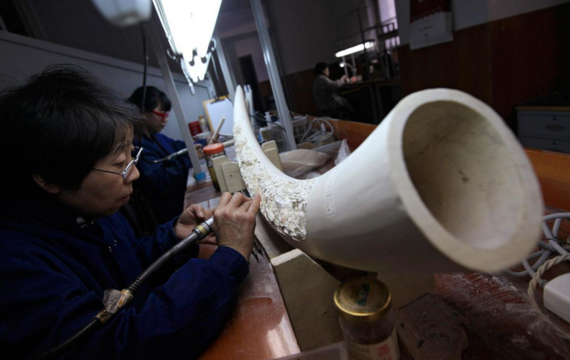 "There are a lot of things that need to be addressed before a ban is implemented," says Aster Zhang, a wildlife biologist and professor at Beijing Normal University.

Now, a group of Chinese researchers from several disciplines have come together as an expert working group to assess options and make recommendations to the government. They'll examine different possibilities for the form and timing of a ban and how to promote compliance.

"It's unique because it's done by Chinese themselves," says Aili Kang, Asia director of the Wildlife Conservation Society, a global nonprofit organization headquartered in New York City. "This is crucial if you want any impact on the central government process."

The working group is supported by the Science for Nature and People partnership, or SNAP, a collaboration among the Wildlife Conservation Society, the Nature Conservancy, and the National Center for Ecological Analysis and Synthesis. SNAP gathers specialists from a broad range of disciplines to undertake science-based analysis to tackle high-profile problems.

Zhang and Kang are the joint principal investigators of the ivory working group, which includes Chinese researchers from leading universities, such as Beijing Normal University, Sun Yat-Sen University, People's University, the Environment Policy Department of Chinese Academy for Environmental Planning (CAEP), and Wuhan University, as well as several international experts.

The researchers aim to have initial results and recommendations to share with delegates to the National People's Congress (China's legislature) and the Chinese People's Political Consultative Conference, a political advisory body, in March 2016.

This is an excerpt of an article on National Geographic titled Chinese Researchers Explore How to Implement Ivory Ban and was published with permission. For full article, please click here.