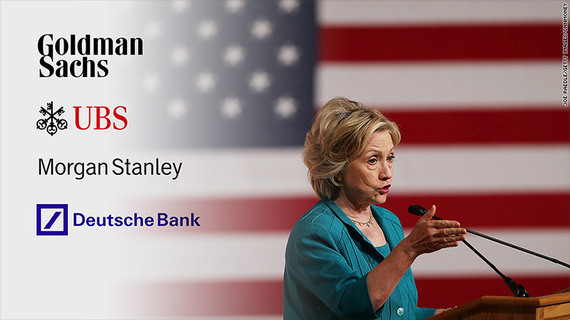 Goldman Sachs -- the investment bank that was so instrumental in causing the greatest economic collapse since the Great Depression -- pays Hillary Clinton $200,000 an hour or more to speak to their executives and investors. (The median income for an American family is $52,259 a year.)

What do Hillary and the Wall Street bank discuss that's worth over $200,000 an hour? And what does Goldman Sachs, and other Wall Street firms who have paid Hillary $2.5 million in the past two years, expect in return?

If you ask Hillary, you'll never find out.

When asked by a reporter in Manchester, New Hampshire on Friday if she would release transcripts of her Goldman Sachs speeches, she laughed and turned away (just as she initially laughed when asked about her email server.)

Hillary's typical speaking contract forbids the public release of any recordings of the event and requires a stenographer selected by Hillary to transcribe the event and turn the notes over to her, so there's nothing stopping her from releasing her speeches except fear of the political fallout.

Democratic voters, who are concerned about the undue power of Wall Street over the economy and the government, might think twice about how seriously to take Clinton's campaign promises to reign in Wall Street, particularly in light of her opposition to Elizabeth Warren's bill to reinstate a modern-day Glass Steagall Act, after it was repealed by Bill Clinton.

(They might also wonder whether Hillary's increasingly belligerent attacks against replacing private insurance with Medicare-For-All -- not just in short-term grounds of political feasibility but on long-term grounds that it's not right for America -- has anything to do with the $5 million in speaking fees she and Bill have received from the medical-industrial complex over the past two years.)

Democratic voters might also remember Mitt Romney's infamous statement to a $50,000 a plate gathering that 47 percent of Americans are lazy, entitled recipients of government handouts.

His private remarks became public when someone -- probably from the catering crew -- released the video of Romney's remarks to a reporter and they went viral. The video of the private remarks probably did more than anything else lead to Romney's defeat in an otherwise close Presidential campaign.

Which brings us to Hillary's electability. Democratic voters who are leaning towards Hillary because they think she's more electable than Bernie (despite polls showing Bernie doing better than Hillary against the main Republican contenders) should perhaps worry that there are statements in one or more of the Clintons' $120 million in private speeches over the past 14 years that, if made public during the general election, could sink Hillary's campaign and turn the White House over to the Republicans, the way Romney's 47 percent remarks sunk his presidential ambitions.

In one of the few journalistic reports on Hillary's private Wall Street speeches, Politico indicates that Goldman Sachs executives were quite comfortable with her message.

Ordinarily these masters of the universe might have groaned at the idea of a politician taking the microphone... But Clinton offered a message that the collected plutocrats found reassuring, according to accounts offered by several attendees, declaring that the banker-bashing so popular within both political parties was unproductive and indeed foolish... Certainly, Clinton offered the money men -- and yes, they are mostly men -- at Goldman's HQ a bit of a morale boost... [Clinton's remarks] did register as a repudiation of some of the angry anti-Wall Street rhetoric emanating from liberals rallying behind the likes of Senss. Elizabeth Warren...

The only way for Hillary to relieve Democratic voters' valid worry of a devastating bombshell from a leak of one of her private Wall Street speeches is to release the transcripts early in the primary season.

And journalists, who have so aggressively sought Hillary's email transcripts, should equally aggressively seek transcripts of her private paid speeches, which her speaking contract indicates she's in possession of.

The contract, made public through a Nevada's public records law after she spoke at UNLV, stipulates that the only record of her speaking events allowed are made by a stenographer approved by Clinton whose transcription will be given only to Clinton. It also provided that she must travel only on a $39 million Gulfstream G450 jet or larger, be put up in the Presidential Suite of a luxury hotel of her choosing (along with five more rooms for her advance staff), detailed requirements on the refreshments to be provided in the green room, and Clinton's approval of all publicity, moderators or introducers.

While Hillary hasn't driven a car since 1996, until recently Bernie Sanders flew home most weekends from Washington coach-class on Southwest. Those who remember how the first President's Bush's befuddlement at seeing a scanner at a grocery store check-out counter reinforced his image as an out-of-touch Washington politician and helped him lose his 1992 reelection campaign might want to consider how Hillary's taste for the lifestyle of the rich and famous might impact ordinary voters.

The millions of dollars in personal payments Wall Street and other business interests have paid to the Clintons at least raise questions about how serious Hillary's promises to reign in Wall Street should be taken by voters.

And even Democratic voters who otherwise prefer Hillary should worry about what bombshell remarks from her secretive Wall Street speeches might be released by Republican dirty-tricksters during the general election campaign, if she's the nominee, and help put Donald Trump, Ted Cruz, or another right-wing Republican in the White House.

Art Garfunkel told CNN that he and Paul Simon allowed Bernie Sanders to use their song "America" in a campaign commercial because of Hillary's speaking fees.

If it's not special access, the ability of Wall Street lobbyists to help write financial legislation and regulations, and the avoidance of criminal prosecution, both past and future, then banks' shareholders haven't been getting their money's worth and should fire their $20 million a year billionaire CEOs who've been paying millions of dollars to the Clintons.