CNN debuted its holographic correspondents Tuesday night shortly after 7PM Eastern. The first hologram was one of reporter Jessica Yellin, who was reporting from Chicago.

Wolf Blitzer welcomed the holographic Yellin saying, "Jessica, you're a terrific hologram, thank you so much." 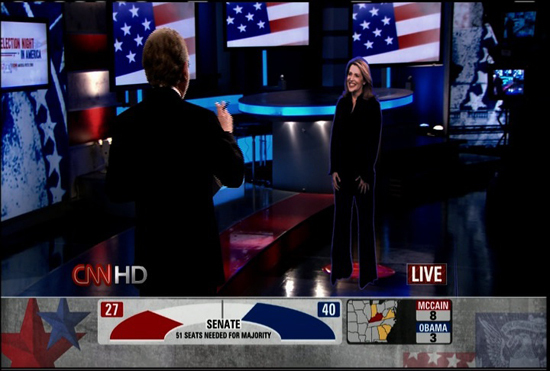 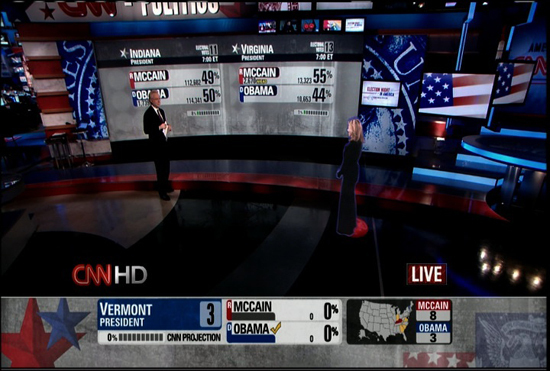 BLITZER: You saw Jessica Yellin over at Grant Park just a little while ago when we were talking to her. We're going to do something that's never been done on television before. We're going to bring her in from Chicago into "The Situation Room" -- into the "CNN Election Center" -- excuse me -- right now. I want you to watch what we're about to do, because you've never seen anything like this on television.

BLITZER: All right. Big round of applause. We did it. There she is, Jessica Yellin.

I know you're in Chicago, but we've done something, a hologram, we've beamed you in. We beamed you in here into the "CNN Election Center."

I want to talk to you as I would normally be talking to you if you were really face to face with me. I know you're at least 1,000 miles away, but it looks like you're right here. Tell us what's going on in Chicago right now.

YELLIN: Well, there are massive crowds gathered outside here, as you just saw. 65,000 ticketed people are going to be let in, but as many as a million are expected to be outside, surrounding this Grant Park location.

And walking on the streets outside, Wolf, you can feel the intensity, the excitement, the anticipation for what they hope will be a truly historic night. He's their hometown boy here in Chicago, Barack Obama is, and so there's real passion for him in this town, Wolf.

YELLIN: Barack Obama is at the Hyatt Hotel nearby, where he is going to eventually be watching election returns as well. He played basketball earlier in the day, which has become, you know, an Election Day tradition for him. And we're expecting him to go home at some point, change, and then watch his election returns, and you know, turn up here eventually to make the much anticipated speech.

BLITZER: You know what I like about this hologram -- and you're a hologram now, Jessica -- instead of having thousands of people behind you screaming and shouting, you know what, we can have a little bit more of an intimate conversation, and our viewers can enjoy that as well.

How excited are you, Jessica, that this is -- you're the first one that we've beamed into the "CNN Election Center?"

It's something else. It's the first time it's been live on television, and it's a remarkable setup, if I could tell you about it for a moment.

I'm inside a tent in Chicago that's been built -- engineers spent about three weeks doing it. There are 35 high-definition cameras ringing me, in a ring around me. I'm in the center. And they shoot my body at different angles, and I'm told that transmits what looks like an entire body image back there to New York. These cameras, I'm told, talk to the cameras in New York, so they move and they know when to move when the cameras in New York move. And it looks a little different from real person there, but it's pretty remarkable.

Let's get back to the important politics of this night. What are they looking for right now, the Obama campaign? What are they most interested in seeing in this, the early -- the early part of this evening?

YELLIN: Well, what they're going to be looking for, first of all, are those red states that we've been talking about -- Virginia, Indiana -- to see what the results look like. You started talking about it. And especially how those late deciders broke. They have a very clear sense of how many people were already on board with them going into today. The big unknown is the people who made up their mind yesterday, today. If there's a high number of late deciders breaking for them in these red states, they feel that will be a very, very good night.

And so, they are feeling nervous. Everyone I'm talking to very, very nervous right now, Wolf.

BLITZER: I think a lot of people are nervous out there. All right, Jessica. You were a terrific hologram. Thanks very much. Jessica Yellin is in Chicago. She's not here in New York with us at the "CNN Election Center," but you know what, it looked like she was right here. It's pretty amazing technology.