I'm completely fascinated by a recent phenomenon that I have not only observed, I have become an unwitting participant as well. It seems that chickens are the new dog. There are a variety of breeds - some beautiful, some homely, but whichever someone has, they are apt to be fiercely protective of their flock. Friends and associates are cordoning off space, whether it be a sprawling backyard field or a postage stamp city slicker's pen. Facebookers are updating the status of their laying, Twitter is seeing a cacophony of tweets about how to look after this canine replacement and entire sites are being devoted to the care of these domesticated birds (see TheCityChicken.com, UrbanChickens.org, and MadCityChickens.com). While the trend of urban poultry farming is clearly on the rise (without firm national statistics, we can point to the upwards of 30k members on sites like BackYardChickens.com, with an average of 100 new members a day!), the most interesting thing is that this meme seems to have many explanations rather than one specific origin.

After 2 years of careful consideration I acquired two Silkies from a devout 4-H'er. Silkies are the Pomeranians of the chicken world - beautiful, cuddly, proud and somewhat useless. 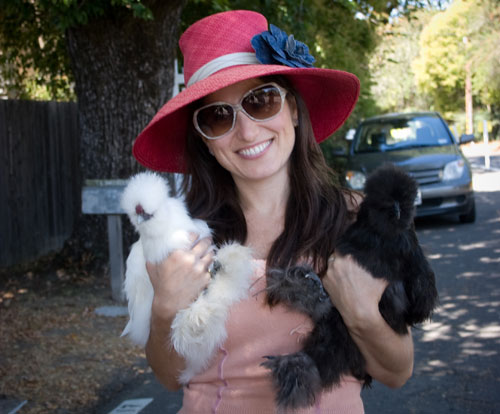 At around the same time my friend Chris acquired some real "layers" that aren't quite as chic but definitely more productive. A verbal war ensued over who had the better birds, all in jest. But it did prompt me to ask what motivated him to get his. Turns out, this ex-SUV driving, former conservative-voting, all-American guy felt it was time to take his health into his own hands. He and his wife Beverly began tending to their own organic garden and chicken eggs seemed like an obvious way to increase their protein. I have never heard anybody so proud of their pet's accomplishments. Becoming agrarian seems to suit them beautifully.

We got our hens after we had to give up our dog due to my son's allergies. I decided that if I was getting a new pet, it was going to reciprocate and have some positive environmental claw-print, rather than the heavy carbon paw-print of a dog (think of all those blue-baggies that preserve the poop in landfills for an eternity). Our chickens were virtually free and require very little maintenance (10-15 minutes a day at most). We borrowed an old hutch from a friend and bought one large bag of organic scratch and one block of cedar shavings for bedding for a grand total of $55. Two months later I'm about 1/8th through both and the truth is I don't really need either. Chickens are happiest eating bugs and kitchen scraps, so they are essentially living composters. We use the nitrogen rich excrement as fertilizer for our organic garden and we collect little eggs (silkies are all about quality, not quantity) that are a perfect lunch snack for my daughter. I feel great about 'growing' - I've learned only recently that the USDA considers grocery store eggs to be "fresh" up to 45 days after being packed!

As part of this new coup community, now Chris and I are swapping fowl stories about how to best use droppings and talking about the next domesticated animal that will get closer to edible independence. But the six degrees of poultry separation keeps popping up! I was sharing my story on Facebook, when suddenly I was flooded with similar tales. Turns out that many of our friends have been contemplating adding some clucking to their lives or in a surprising number of cases, have already done so. Some live in more urban areas, some more rural. Some are liberal and some are conservative. I think that it is similar to solar panels. People get them for different political views. There are those that want energy independence, those that want to save money over the long term and those that just want to take a stand for the planet.

Chickens address the psychographic wounds, but are a lot more affordable than photo voltaic panels. Airing my dirty laundry (the cage does need to be cleaned regularly) on Facebook, a friend in Germany responded to my posts by turning me on to another friend's rants about becoming an urban farmer: urbanchickens.net. More and more it seems I'm not the trailblazer I thought I was. It's like finding out that the band you "discovered" has a number one hit on the radio. Then you come to the realization that you are now sharing a collective consciousness and there is something really exciting about that. So if you have gone down the same feathery road, I would love to hear about your experience too!

For more ecofabulous insights, make sure to sign up for my weekly list of top picks in the world of green.