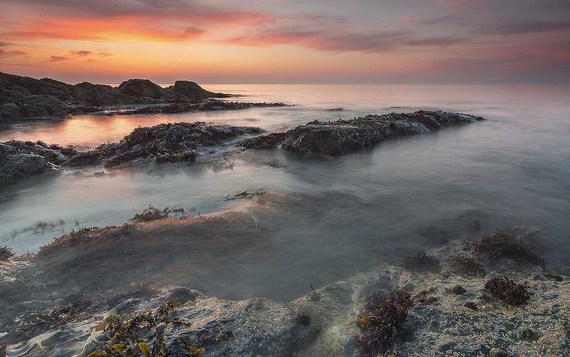 Australian climate scientist Tim Flannery suggests we could cool the climate with massive seaweed farms to suck carbon dioxide out of the atmosphere.

Geo-engineering is generally considered the last ditch attempt at preventing climate destabilization, one that could create as serious a problem as it solves.

But one climate scientist has detailed some environmentally safe geo-engineering technologies that could be adopted together with the more traditional way of reducing climate change (such as going solar).

Unlike potentially dangerous geo-engineering schemes, like seeding the high atmosphere with a blanket of sulphur, he proposes "third way" solutions.

His eco-geoengineering idea builds on what nature does to draw CO2 out of the atmosphere already, the way trees do for example, making something that is useful, wood, that is then "sequestered" in houses for 50 - 100 years.

"Seaweed grows at 30 to 60 times the rate of land-based plants, so it can draw out lots of CO2," Flannery told E360 in a recent interview.

"If you cover 9% of the world's oceans in seaweed farms, you could draw down the equivalent of all our current emissions -- more than 40 gigatons a year."

Flannery said that such a gigantic geo-engineering project could grow enough protein to feed a population of 10 billion people- a huge opportunity.

Seaweed farms can also reverse ocean acidification. Off the coast of China, there are about 500 square kilometers of seaweed farms producing edible seaweed for the food market. PH levels have been shown to rise as high as 10 around these seaweed farms. At the moment with an acidified ocean it is 8.1.

"You could buffer oceans," he said. "They are fantastic places for growing fish, shellfish, or prawns, just because of that buffering impact."

Flannery lays out this and other ideas in detail in his latest book, Atmosphere of Hope - which has a more optimistic take on climate change than his earlier book The Weather Makers. These include carbon fiber technology that turns CO2 from air into industrial products from cars to skyscrapers and even space elevators.

It is pretty unusual for a climate scientist to propose geo-engineering, but Flannery explains why he thinks seaweed farming on a grand scale could work:

"When you think about it, the ocean floor is where most of that excess C02 is destined to reside, or most of it anyway over geological time. The C02 is absorbed into the oceans, it is turned into a carbonate on the bottom of the sea as limestone or whatever.

So the idea that we should pump C02 into deep ocean sediments at 2 or 3 kilometers is really mimicking what happens over the longer term anyway and it provides a stable environment for carbon to be stored."

A pretty wild idea! He even suggests that any methane coming from the seaweed, as it goes through its natural lifecycle cycle and rots, could be harvested for energy. That's where it begins to seem a bit farfetched...

Clayton writes for several publications and working to accelerate the adoption rate of solar power. Read more on UnderstandSolar.com, where this post originally appeared.