Is it a fairy tale reunion for Courteney Cox and David Arquette?

The couple, separated since October, reunited with daughter Coco in Disney World. Arquette posted multiple photos to his twitter account, including the one below, writing, "Disney World really is the most Magical Place on Earth."

The pair have shown their lasting affection through press interviews and during previous reunions, recently coming together to promote their upcoming film, "Scream 4."

Both Cox and Arquette have spoken of their openness to getting back together, with Arquette especially clear that he'd like to reunite the marriage for good.

"There's always a possibility, and that would be the ideal situation," he told Oprah in February. "I want what's right...I want us to be the best people we can be...if [that] doesn't make her happy...that's still to be answered. I know that I'll be with her for my whole life. We have an amazing family together and we're really great parents together."

Last week, Cox was spotted on vacation in St. Barts with her friend and "Cougar Town" cast mate, Josh Hopkins. 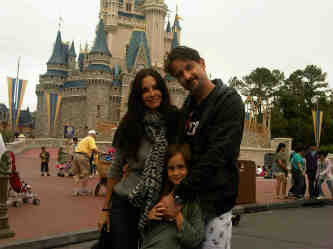