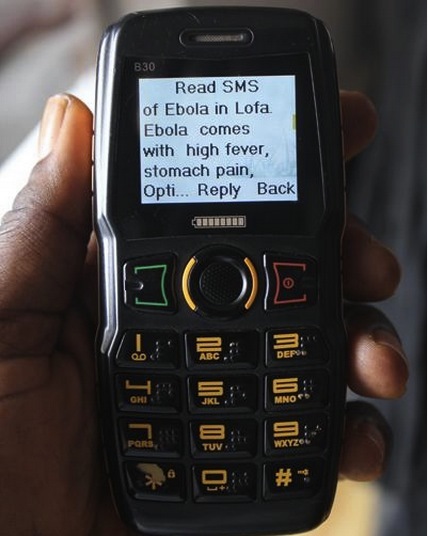 Last week six girls from a poor neighborhood in Monrovia helped Chris Fabian and his UNICEF team design a U-Report system for Liberia. The system allows anyone to become a citizen reporter or a health enabler on the ground in the fight against Ebola. After testing, it will launch this week with widespread deployment very soon and will quickly become an important source of information for all Liberians and health officials. Let's find out how this happened.

Back in 2008, when Steve Jobs first introduced the App Store and 500 new apps, he had been reluctant to move forward with its release, fearful that third party app creators would tarnish Apple's reputation. Most likely, he could not have imagined the global impact the App Store would have in only six short years. By September 2014, the App store had reached 1.3 million apps. And nowadays, there's an app for just about everything and the global community has taken notice.

The impact of mobile applications is growing and it's not just for Angry Bird enthusiasts and eBay shoppers anymore - but also for innovators working to create a freer, healthier more prosperous world. As the App Store reached record numbers this past September, UNICEF launched RapidPro, its own version of the App Store. RapidPro is an open platform of applications for governments, non-profits and companies to deploy essential information and connect whole communities to life-saving knowledge.

This "App store for good," as Dr. Sharad Sapra, Director of UNICEF's global Innovation Center puts it, is the work of smart innovation and partnerships. UNICEF's global innovation labs are led by the exceptional Chris Fabian and Erica Kochi. They are in Liberia and working with other West Africa countries, sharing real time information with over 70 organizations working on the ground.

One of the apps, U-Report, where anyone in a country can become a citizen reporter and ask or answer questions by text message has already shown really impressive results. In Zambia, the U-Report app has connected more than 50,000 people to counseling services and voluntary AIDS testing of U-Reporters went by 40 percent. In Uganda there are 270,000 people using U-Report and in Nigeria over 70,000. It is these eyes and ears all over the country translated into text messages that can and are needed to save people's lives and stop the transmission.

In September 2014 Minister Ngozi at the UNICEF launch of RapidPro pointed to the central role mobile phones played in getting Nigeria 'Ebola-free'. She said mobiles were essential at the outset of the Ebola crisis in Nigeria, the most populous country not only in West Africa, but on the whole continent. Given its size, it would have magnified the global threat if Nigerians had not been able to stop the virus' spread.

The reach of RapidPro has yet to be seen, but undoubtedly, in such a short amount of time, apps have already transformed how we do business, communicate, exchange ideas and receive information - my bet is on RapidPro proving to be important in worldwide development efforts. The mobile phone is proving key to arresting the spread of Ebola and improving the identification and treatment of those stricken.

This is how innovation happens.

A UNICEF team took one breakthrough - Steve Jobs' App Store - and adapted it to help solve one of the most dangerous problems facing the world. Now, with six schoolgirls in Liberia, it could play an important role in global health.

What if Steve hadn't had the courage to put the App Store on the iPhone? Today, we are so glad he did and UNICEF followed with one for good. Follow UNICEF's Chris Fabian real-time blogs from Liberia to get a heartfelt insight into what is happening on the Ebola crisis.