The full title of William Shakespeare's Twelfth Night is Twelfth Night or What you Will now in a joyous production by Daniel Sullivan at the Delacorte Theater in Central Park and though scholars apparently believe the subtitle confers the meaning of Christmas merriment or underscores the entitlement of the noble characters, I think that Shakespeare meant to remind us of the capriciousness of love.

For often, what we will in matters of love is not necessarily what we get.

And that theme resonates in multiple directions as females take on the attributes of males as in the case of Viola slash Casario (Anne Hathaway) or vice versa in the case of Malvolio or "Black in my mind but yellow in my legs"(Michael Cumptsy).

We've all had occasion to wonder what the men who love us but complain of our feminine failings (obsessiveness, fickleness, indecision et al) might do if we were stripped of the very things that define our differences. Viola has a chance to find out when she dons a blue waistcoast, beige pants and high black boots, much more than she ever desired or imagined. Her impulsive scheme to get employment backfires when she finds herself falling for Duke Orsino (Raul Esparza). 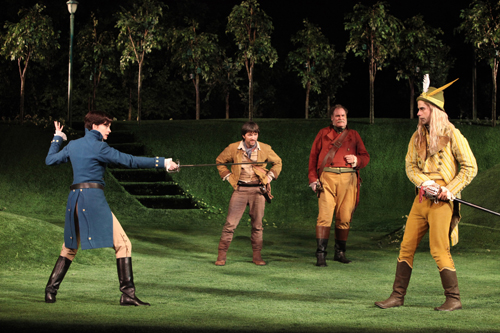 That doesn't mean Shakespeare minces words. Though Orsino says "I have turned into a heart" of his early declaration for Olivia, he also later offers proof of the lesser ability of females to feel love because they lack "retention" and instead of deep feelings, have "appetite".

It's always summer that's the Public Theater's finest hour -- the yearly line waiting for tickets an event in and of itself, the chatty patrons getting to know each other's small victories as the prolonged wait often usurps an entire day. (If you donate you can go line-free). People seem not to actually mind too much, and reports of hired line waiters are offered up with only a tinge of cynicism.

A happy New Yorker, therefore, is a New Yorker with a ticket to Twelfth NIght, especially as the run ends on July 12th.

The extra music by HEM (if you don't know Leave Me Here already then this is your chance to catch up with this dreamy group) and the sprightly on stage musicians as well as the vocal capabilities of this cast makes this a play with music if not quite a musical: along with Hathaway , Audra Macdonald (Olivia ) is mostly known as a powerful songstress, and David Pittu (Feste) too can put a song over. If music be the food of love then, this ensemble rocks on.

And the gift for comedy shines most notably in the bumbling team of Sir Toby (Jay O. Sanders) and Sir Andrew (Hamish Linklater ) whose blonde dreds and mustard breeches make him look a bit like the Ensors that I had seen at MoMA earlier in the day. In fact, the lurid greens, the plumed hat and the cross dressing make an afternoon at the Ensor show an evening at the Delacorte seem uncannily of a piece.

Many actresses aspire to be like Audrey Hepburn with her perfect combination of gamine and sexy; few achieve it. Hathaway really does: her charming way of shaking off a spontaneous kiss or re-asserting her "masculinity" with a sudden baritone after a high pitched shriek threatens to betray her guise is very funny and fast. Here is an actress we can see thinking on her feet. 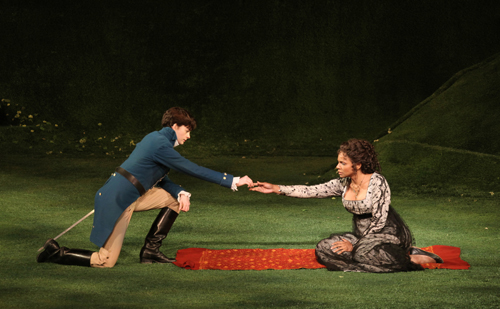 Anne Hathaway and Audra McDonald in The Public Theater production of Twelfth Night at Shakespeare in the Park, directed by Daniel Sullivan, running through July 12 at the Delacorte Theater in Central Park. Photo credit: Joan Marcus

Why indeed have words disappeared as weapons of love? We can't blame the advent of email for everything as wordsmiths are often relegated to the sidelines of song or poetry. Why isn't the art of artful dialogue promoted more in school as a way of getting a leg up on a rival? If only we could encourage courting with cleverness.

But there is some truth to this very different way we process love. For example, the famous male ease in putting out of sight out of mind. I'm thinking that I might try to find a blue waistcoat just to find out what it feels like to have this marvelous facility for forgetting.

Though the Christmas present motif is a good one for there could be no greater present than sitting under a purple, rainless sky; occasionally, while watching the talented, exuberant cast cavort on a green carpet I felt as if they'd all fallen into a magical sand trap on the eighteenth hole.

By my troth, come Hob Nob at the Delacorte! The Sweet Lady Ho Ho! Welcome Summer! 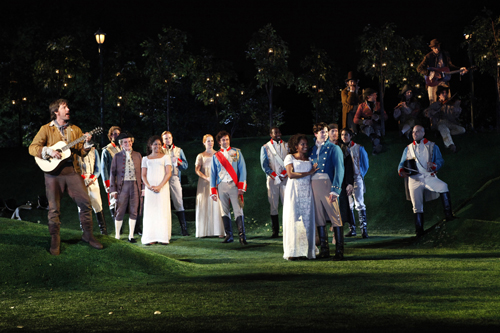 The company in The Public Theater production of Twelfth Night at Shakespeare in the Park, directed by Daniel Sullivan, running through July 12 at the Delacorte Theater in Central Park. Photo credit: Joan Marcus