From the University Of Florida to the University of California, Irvine to Arizona State University, insensitive blackface videos, images and parties continue to pop up at colleges across the United States.

Partygoers don baggy pants, throw on their finest grills and even paint their skin a dark hue in pursuit of a good time and playful parody. While these parties attract fiery criticism nearly each time they take place, they seem to be pervasive within the university party scene.

Director Justin Simien, who explores the complexity of the black experience at an elite university in his upcoming satirical film “Dear White People,” weighed in on the controversial practice in a HuffPost Live interview on Tuesday.

"It happens in these closed cultural loops, and it happens when people are not necessarily trying to make black people feel bad," Simien said. "It is a combination of being ironic, celebrating and kind of being ignorant to the experience of the other."

Ultimately, Simien concluded that blackface parties are a manifestation of a lack of understanding among racial groups.

“It comes down to the fact that we as a culture are so unwilling to see ourselves in people who don’t look like us," Simien exaplined. "If we found a way to be a little bit more open in that respect, they would have enough black friends and say, 'You probably shouldn’t throw this party on Martin Luther King Day, and you probably shouldn’t Instagram about it because Gawker will pick it up and this will be a blight on this college campus.'"

PHOTO GALLERY
What Was A College Party Like In...

'Dear White People' Director Justin Simien: 'Closed Cultural Loops' Cause Blackface Parties
What Was A College Party Like In... 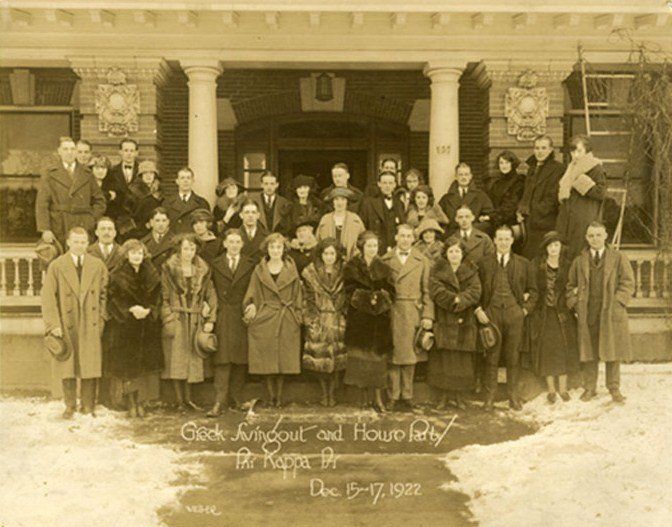 1 / 8
1920's
In the 1920's, many colleges were still segregated by gender. Some schools, like American, Cornell, Penn, Iowa, Oberlin and Bates, became or <a href="http://lcweb2.loc.gov/ammem/naw/nawstime.html">were founded as coeducational</a> in the 19th century. But Harvard, Princeton, Yale, Dartmouth and others <a href="http://www.yale.edu/opa/arc-ybc/v29.n23/story4.html">didn't integrate the sexes</a> until the 1960's or 70's. The only time men and women would interact was through fraternities and sororities at formal events like dances and dinners, according to <a href="http://books.google.com/books/about/The_damned_and_the_beautiful.html?id=A_0YAAAAIAAJ">The Damned and the Beautiful: American Youth in the 1920's by Paula Fass</a>. Greek life <a href="http://www.alternet.org/story/140416/why_is_the_frat_boy_culture_so_sleazy_and_sex-crazed" target="_blank">was the hub for dating</a>, and formal student organizations on campus defined the social structure. This was the Prohibition era, so any drinking took place in private in the fraternity houses or off campus <a href="http://www.sparknotes.com/testprep/books/sat2/history/chapter16section3.rhtml" target="_blank">at speakeasies and jazz clubs</a>. Any "college party" on campus<a href="http://redd.it/1epfaf" target="_hplink"> would be formalized</a>, according to redditor 1Tw03Four, like dinners that include a lot of speeches and other specific rituals.
WikiMedia: Greek Swingout 1922 at W&J College