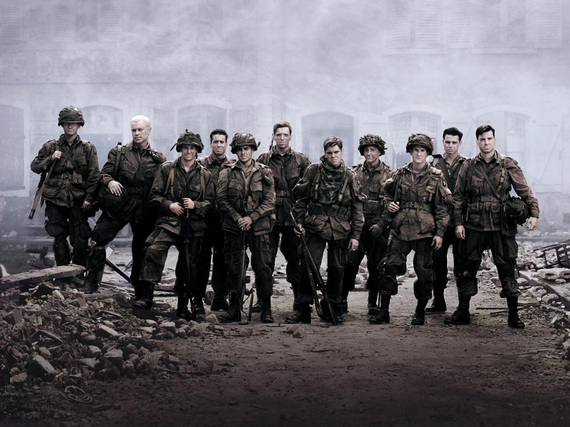 I recently watched the HBO series "Band of Brothers." From the first episode to the last, it's difficult to watch and equally as difficult to look away.

One chapter follows Easy Company from mid-December 1944 through January 1945. They are fighting the Germans and brutal winter weather in densely-forested terrain. Just after the fierce fighting, the utterly depleted, combat-weary men arrive in Haguenau.

David, a soldier who had been wounded many months before, but is now recovered, meets up with his comrades as they enter the town.

The faces of the few remaining men of Easy Company, as David joins up with them again, are haunting. David and the new replacements have no idea what these soldiers have experienced. How could he possibly know? And, even more difficult is that he has no idea that he has no idea.

The faces of the men of Easy Company display a nonverbal resignation to the unimaginable horror they now carry in their minds. They seem to peer directly through David to scenes that are an all to unreal reality.

I have watched this two-minute section of the movie at least 10 times. I keep searching for an expression. Anything. All they provide are steady gazes of heavy nothingness. The expressions, or lack thereof, are similar to the look on the faces of many of my clients when they first come to counseling. It's the 1,000-yard stare.

The experiences some have had in combat and others in their own homes are unimaginable. But the look tells us so much. The far away, glazed over, glassy eyed, vacant face tells us of evil and terror and unescapable chaos. It tells us of a profound sense of isolation. It tells us there is a heart and mind trapped somewhere between fleeing and fighting. Frozen.

If you find yourself looking through others in the "you'll never understand what I've seen" way, you are not alone.

How do you frame up in words something that is a half step away from utterly unspeakable?
Find someone who can meet your gaze and not look away. Find someone who can hear your story without squirming. All of your story. When you feel it's time to return from the tundra of your mind, support is available. There are many ways to safely engage in healing.

Life can come back into focus, and it can be safe enough to feel again. You can connect to your heart and be glad it's beating once more. The things you've seen won't be forgotten, but your resignation and isolation can be lifted to reveal joy.

The "Band of Brothers" series is narrated by the actual soldiers who fought in WWII. Their moments of isolation and pain seem to lift from their faces as they share their 1,000-yard stare stories. Is it time to lift yours too?

More:
healthy livingtraumacounselinglossgrief
Newsletter Sign Up
The essential guide to taking care of your mind and body
Subscribe to HuffPost’s wellness email
Successfully Subscribed!
Wellness delivered to your inbox