Seven messages and counting on my voice mail from different Bay Area reporters, all wanting to know the Muslim community's reaction about the recent heinous killings of Nidal Malik Hasan. All wanting to know what had driven a 39-year-old Muslim to go on a killing rampage, murdering 13 people in Fort Hood, Texas. "He had it all," someone said, "he's an educated man, he's a doctor." Why did he do it? 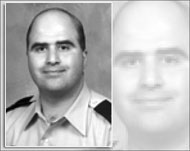 Apparently, I fit the profile of someone who has these answers: I am a Muslim Palestinian American: I must know what one out of the 1.5 billion Muslims around the globe is thinking at any given time.

"Hey, Jamal...sorry to disturb you so early. But you know the Hasan story is big, and I was wondering if you're willing to come for an interview and talk about how it feels being a Maahzlem (Muslim) and all," a television producer says to me on my cell, while I was driving to work.

"How did you feel being a Christian, with Timothy McVeigh and Adolf Hitler being Christians?" I fired back.

Silence... I probably should not have said that, but there it is.

I'm sick and tired of these kinds of questions from media outlets whenever some kooky Muslim decides to commit a random act of violence...or in this case when a GI psychiatrist goes psycho. At the same time, I'm also sick and tired of self-appointed Muslim experts and spokespersons who jump at every miserable opportunity like this one to try to explain Islam.

"Islam is a religion of peace," they say.

No, it's not. Not anymore than Christianity is a religion of love. They're just religions, and what you do with them is all up to the believer. More people have died in the name of religion than in any other catastrophe or plague.

Here is what I know about Hasan:

He was a disgruntled GI who wanted to leave the military for whatever reason: his conscience, his religion, or for personal reasons. He could have left peacefully. He could have quit and paid the price without hurting others, just like Muhammad Ali, who refused the draft to serve in Vietnam but did not feel the need to go on a killing rampage. Instead, he was stripped of his heavyweight title and was sentenced to five years in prison.

Hasan is a coward...not only for committing this heinous act, but for counting on being killed or taking the gun on himself, leaving behind his family and the entire Muslim community to account for his despicable actions.