The latest issue of Ebony magazine, which hits newsstands next week, features the first post-election interview with President-elect Barack Obama and the magazine has marked the occassion by naming Obama its first "Person of the Year." As the Tribune's Swamp blog reports:

If the election of the first African-American president does not stand out as a landmark event in the history of a magazine founded for African-American readers in 1942 and now reaching 12 million readers, it's difficult to imagine what does.

"We won because the American people mobilized for change,'' Obama says in the interview that he gave to Ebony on Nov. 13, his first interview following election. "It really was people at a grassroots level who carried our campaign financially, who carried it organizationally, and we don't want that to dissipate.''

The interview, along with the magazine's naming of Obama as its first-ever Person of the Year, a look at how "Barack's Chicago'' helped shape the man and a look at "First Lady Style: Michelle Obama's Eclectic Taste'' all are featured in the January edition of Ebony, a designated collector's edition, that goes on sale a week from today, Dec. 9.

The issue comes with two different cover, which you can check out below. 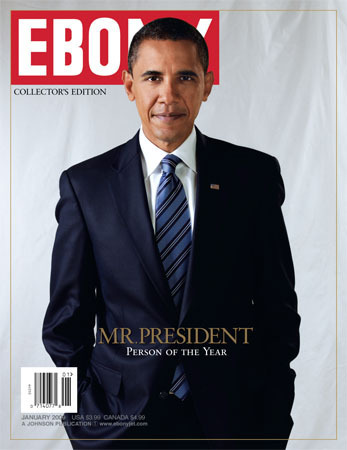 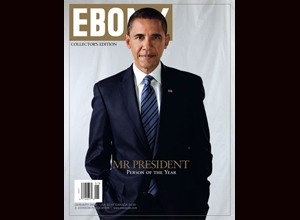