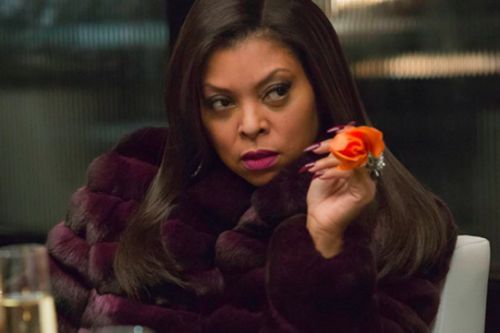 In the past few months, two shows have engulfed social media for similar reasons, until you add acclaim to the equation. Empire is the new, 13-episode smash-hit Fox show, with an album that beat out Madonna for Billboard's number one spot, and a Glee-meets-Dynasty-add-Rap premise. American Horror Story: Freakshow is that Ryan Murphy/Brad Falchuk FX horror anthology, which just ended its fourth season, in which lots of gruesome things happened and pretty much everyone wrote off as a disaster on the scale of Airport 1975 or "ARTPOP."

Dig beneath the plot surface and they're pretty much the same show.

Empire tells the story of musical magnate Lucious Lyon (Terrence Howard), a murderous mogul who's struggling to keep his company thriving before he dies. He has three sons, whom he likes on and off, and an ex-con wife named Cookie (Taraji P. Henson). Bad things happen and people get killed and lots of people have sex. And fabulous guest stars appear.

American Horror Story: Freakshow is the story of Elsa Mars (Jessica Lange), a murderous sideshow matriarch struggling to keep her freakshow thriving before her legs (literally) give out. She's got a right hand bearded lady to keep her in check (Kathy Bates), and lots of "children" whom she loves dearly even if she lies to them and cheats them and occasionally sells them off to bidders. Bad things happen and people get killed and lots of people have sex. And fabulous guest stars appear.

Oh yeah, and both shows have lots of singing.

There are obvious dissimilarities. One is a dramatic, New York show about the modern-day black music world, and the other is a supernatural, Tampa, Florida, period piece about the injustices inflicted upon deformed, mostly white people.

Conceits aside, the shows are prime examples of how quickly audiences love anything new and flashy and outwardly original, while slamming anything that thrives on the same superficial formula, but has been around long enough for us to evaluate, and tire, of the errors.

Empire, for all its bravado and fun and twisted characters and in-your-face bombast, is about as smartly written as a Twitter feed. Not only are the plotlines ridiculous, they rarely last longer than a commercial break. If Lucious is furious with Cookie or one of his children or someone else in his empire, they'll more than likely have made up by the time you've watched Matthew McConaughey sell another car.

The three sons, one bi-polar, one gay, one a bad-boy rapper, also fight with one another--often physically--and their mom, and then, surprise, have moved on to hating Dad, or loving him, by the end of the show. No, you didn't miss an episode; it just feels that way.

Hakeem (Bryshere Y. Gray) has girlfriends who run scripturally amuck. He's hot for an older woman (Naomi Campbell), falls for a bisexual singer, Tiana (Sarayah), gets pissed off with her, forgives her, and, a few episodes later, has slept with Dad's ex, Anika (Grace Gealey). By the last installment, two of those characters were AWOL.

The eldest son, Andre (Trai Byers), is the untalented smarty whose mental illness serves as a mere plot-point. While it's great that bi-polar disorder is getting more attention on TV, Empire's treatment of the disease is borderline insulting. The only reason Andre is ill is to give writers a reason (never fully explained) for him to drop his meds and turn into the Incredible Hulk. If you have no experience with bi-polar disorder you might think all you need to do is skip one dose to become a murderous menace or discover religion--yeah, that happened too, but was pretty much dropped after 45 minutes and a Jennifer Hudson song.

Jamal (Jussie Smollett) kept his dad's money to stay in the closet, changed his mind and lived in a tenement, still didn't come out, did come out, pissed off Dad, lost a boyfriend and gained a new one, who then dismissed him, became a potential murderer, and somewhere along the line was back in Dad's graces and surrounded by money and the daughter that was, then wasn't, his. Apparently, they don't have paternity tests in the all-powerful Empire world.

Cookie is the star of the show, and she's wonderful. She's got the best one-liners since Karen Walker, and she flashes her post-prison figure like the best of 'em. She also has magical powers. Despite her repeated ejections from the palace (both the Empire offices and her husband's suburban home, which, if you pay attention to time frames, has a speed-of-light train to transport characters back and forth), Cookie roams around freely among the high and mighty and the low and dingy. If Lucious kicks her out of the kingdom, which he pretty much does on every episode, she's re-throned by the time Fox News is done promoting its after-show cast interviews.

It's a fantasy, as viewers will claim. And the music's great. No argument there, with stage shows and videos and songs that miraculously materialize in between the dramatics... My! Set pieces come and go so quickly here! It's a fantasy that works because of the sheer audacity of its premise and indulgent showpiece magic tricks.

That's precisely what everyone hated about Freakshow. Once you got past the fun of this year's AHS plot and cast, and the creators' love of horror, nothing stayed in place. Plotlines were inconsistent and flat and often didn't bother with a resolution, and the gore was so rampant you forgot someone was mutilated by the time the commercial break ended.

But it was flashy and fun and absurd, like Empire. The art direction, and camera angles were deliriously seductive, diabolical figures plotted and schemed, then were either killed off or ignored or became somewhat likeable, depending on which of the 13 episodes you viewed. Angela Bassett's three-breasted Desiree Dupree character switched emotional gears so often that her "ding-a-ling" took a backseat to schizophrenic tendencies. Anytime things got dull, the characters hit the big tent for a monster number. On Empire, the big tent is called Leviticus, apparently the only club in Manhattan, where characters break out into song so quickly you almost don't notice the auto-tune kick in. It's not a race for who has the worst voice, Lange or Howard. Howard kills the competition as easy as he kills his friends.

Whereas Freakshow threw in big stars like Matt Bomer and Neil Patrick Harris to chew up the scenery, or to make a prestigious gay icon appearance, Empire threw in big name music stars like Gladys Knight, Mary J. Blige, and Snoop Dogg for blatant ratings boosts and album sales. In the best irony, Patti Labelle showed up on both programs. So did Gabourey Sidibe.

It was great to see Courtney Love again, on Empire, but her plot (after she recorded a Talking Heads song), was sixth-grade level. Her newly sober comeback self was foiled by evil Anika's drug-in-drink trick (a gimmick as tried-out as Farrah's Charlie's Angels hair). The plot could be forgiven if there had been justice, but the former Hole front woman then disappeared as fast as her band once did. Considering Love's own publicized addiction troubles, it came across as cruel to throw her in front of the exploitation bus.

Each show offers up juicy, malicious women, vibrant older females who will never win Mother of the Year but who probably think they deserve it. Elsa and Cookie have sordid pasts, both have, at least indirectly, killed people, both are seeking late-life redemption, both run the (literal) show, and both use everything at their disposal to get ahead. Elsa's kidnapping of Dot and Bette was rather harsh, but Cookie did try and smother her sleeping husband. All for the greater good.

If Freakshow ended with a too convenient mass-murder, Empire was just as much to blame for a reverse-illness scenario. When you're trapped in a script corner, erase those pesky plot traps. The audience won't care.

Or will they? Viewers are loyal to a point, and they have every right to be upset about the downward quality of AHS's writing. It's suffered of late, even as the hype continues. We're already seeing clips for next year's Lady Gaga entrance when all involved should be so busy in the writing room they barely have time for lobster claw takeout.

Empire is still fresh, still reveling in its instant success, a newcomer as shiny as Lucious Lyon's latest star. Unless they seriously re-think the story beyond what Instagram filters work best with Cookie's leopard-print outfits, they'll soon be as unwelcome as a killer clown at a child's birthday party.