For a change, the cost of the health insurance you get at work didn't go up much this year.

The cost of job-based health benefits stayed nearly flat in 2014, according to survey results released Wednesday. This year's figures continue a trend of slow growth in premiums for health insurance provided by employers.

The average annual premium for a family plan rose 3 percent to $16,834, and the average price for a single worker increased 2 percent to $6,025, the Henry J. Kaiser Family Foundation and the American Hospital Association's Health Research and Educational Trust found. Workers on family plans are paying an average 29 percent of that cost, while single employees are paying 18 percent of it. The groups polled more than 2,000 small and large employers for their report.

Workers aren't reaping much of a tangible benefit because the cost of job-based health insurance is still increasing faster than wages and overall inflation. But the growth over the last five-year period is much lower than during the two five-year periods preceding it, the survey findings show. From 1999 to 2004, family health plan premiums exploded by a total of 72 percent, followed by a cumulative 34 percent from 2004 to to 2009. Since 2009, these costs have risen 26 percent. 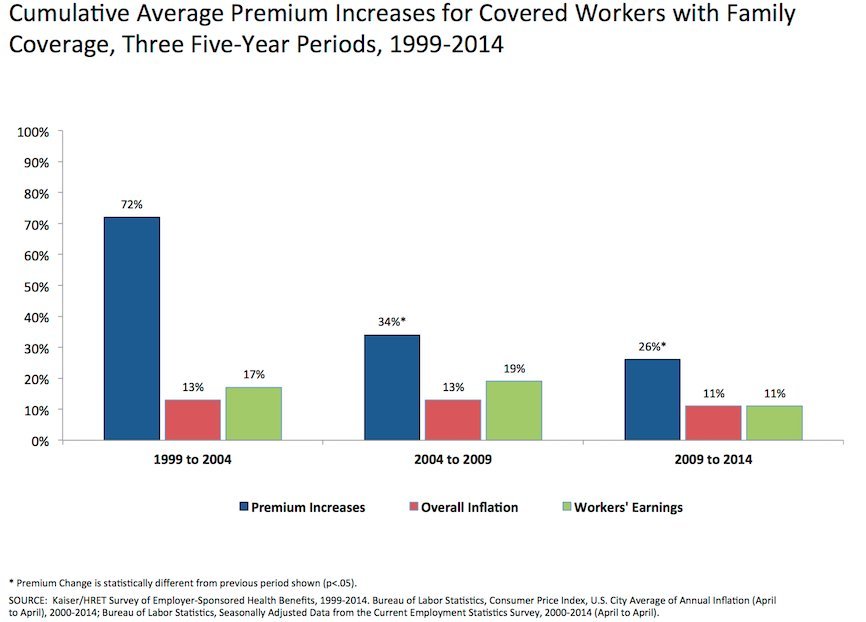 Despite the recent trend of smaller increases, the cost of employer-sponsored insurance has ballooned over the past 15 years, eating up a larger share of workers' total compensation. Since 1999, the average annual cost of health benefits has nearly tripled. 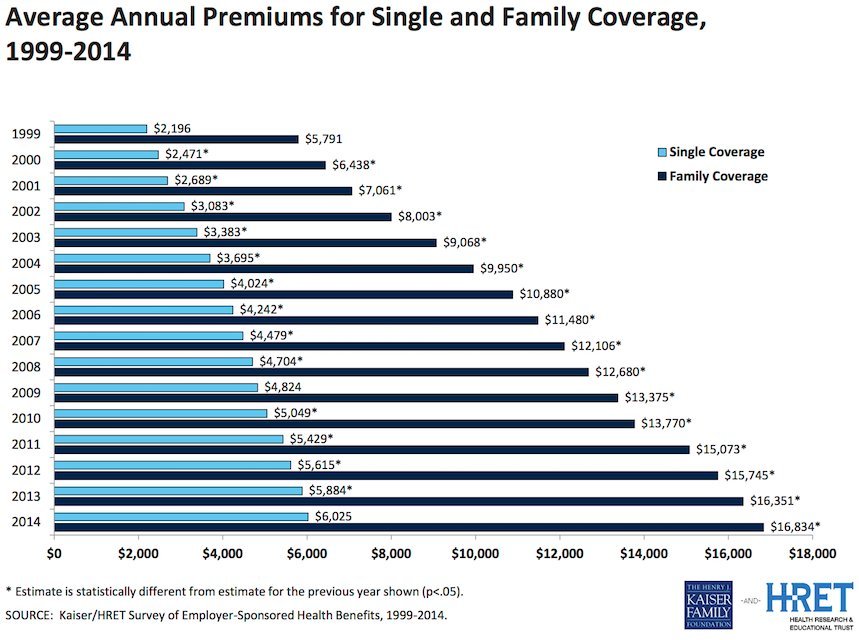 The historically slow increases in national health spending during recent years contributed to lower premium hikes for employer-sponsored health insurance. But companies also are limiting their health benefit expenses by making workers pick up a bigger share of the monthly premiums and of their medical bills, the survey found.

High-deductible health plans with lower premiums but greater out-of-pocket costs have become increasingly common. In 2006, just 6 percent of workers were enrolled in these plans, compared to 26 percent in 2011 and 32 percent this year. And the average size of the deductible for a single employee has risen from $584 in 2006 to $1,217 in 2014. Under plans with deductibles, policyholders must spend the full amount of the deductible out of pocket before the insurance coverage kicks in. 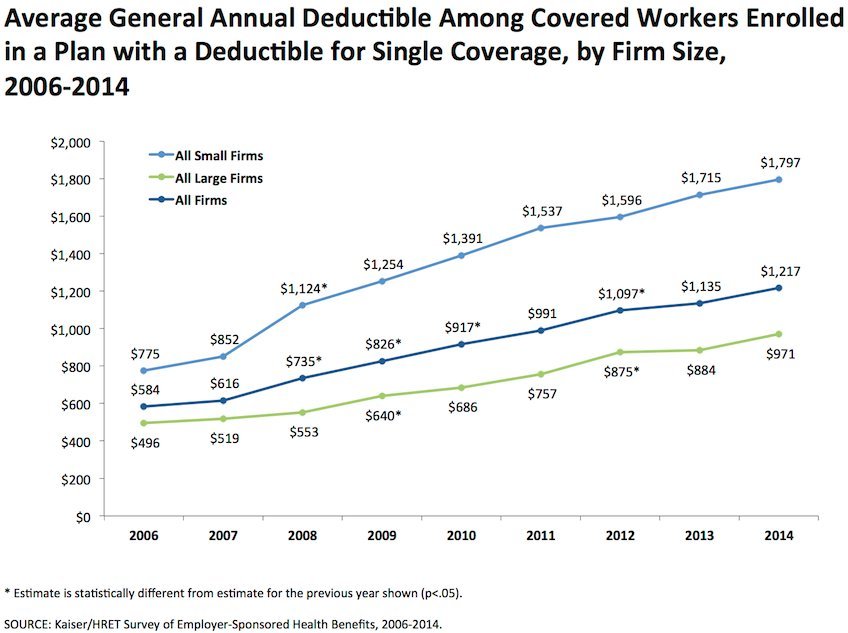 "The relatively low growth in premiums this year is good news for employers and workers, though many workers now pay more when they get sick as deductibles continue to rise and skin-in-the-game insurance gradually becomes the norm," Kaiser Family Foundation President Drew Altman said in a written statement.

The survey also found that the share of employers that offer health benefits to workers, 55 percent, was about the same this year as last year. Small companies are less likely to provide health insurance, but 90 percent of workers are employed by a company that offers benefits to at least some of its workforce. Eighty percent of employees who have access to job-based health insurance accept it, according to the poll.

Looking ahead to next year, the Kaiser Family Foundation and the Health Research and Educational Trust expect the Affordable Care Act, or ACA, to exert greater influence on job-based health insurance. Beginning in 2015, the law requires companies with at least 100 employees to offer health benefits to full-time workers, or pay penalties when employees obtain subsidized coverage via the Obamacare health insurance exchanges. In 2016, that employer mandate will extend to companies with 50 or more workers.

"The relatively quiet period in 2014 may give way to bigger changes in 2015 as the employer shared-responsibility provision in the ACA takes effect for large employers," the report says.

According to survey findings released last month by the National Business Group on Health, premiums for job-based coverage at large companies will rise 5 percent next year, and more employers will offer only plans with high deductibles. These companies expect the ACA to have only a modest effect on 2015 health benefit costs, the poll found.