These are compelling words in the midst of a national climate of increased fear and discrimination toward the almost three million Muslim Americans living in the United States. The Department of Homeland Security Office for Civil Rights and Civil Liberties hosted a meeting with American Muslim community leaders to discuss a proposed response to the anticipated incidents planned by hate groups opposing Islam over the recent Columbus Day weekend in several cities across the United States.

The gathering at Temple University sought to examine the present challenge of Islamophobia in America, particularly as it relates to Evangelicals and Muslims. Numerous high profile evangelicals were present including Jim Wallis of Sojourners and the Texas Baptist megachurch pastor Bob Roberts, Jr. The gathering was convened by prominent evangelicals, Rick Love of Peace Catalyst and Doug Johnston, president and founder of the International Center for Religion and Diplomacy (ICRD), along with Howard Cohen of The Dialogue Institute at Temple University. The Dialogue Institute also hosted the event. Muslim leaders such Imam Feisal Abdul Rauf, named as one of the 2011 Time Magazine's 100 most influential people in the world, were also present. Abdul Rauf was the former imam of the controversial community center and mosque near Ground Zero in New York City. 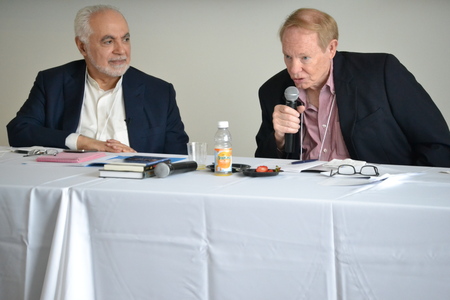 Participants heard stories of the necessity to distinguish between Islamic extremism, terrorism, and adherents of moderate Islam. Muslim religious leaders, U.S. government officials, and evangelical church leaders presented from a vast array of perspectives and topics ranging from statistics about the American Muslim community to personal narratives of religious discrimination. Azhar Hussain, a Pakistani Muslim, told the story of a suburban American community where his nine year old daughter came home from school beaten up, with cuts and bruises, having been traumatized by a classmate who called her "dirty" and "a filthy Muslim" and told her to go back to where she came from, even though she was born in the United States. Later, Hussain learned the classmate had learned in Sunday school about the "evils of Islam" and that Christians should hate Muslims. Rather than be defeated by the traumatic incident, this young girl opened a lemonade stand to raise money for the Council on American-Islamic Relations and to educate people about the Islamic faith in the hopes of enhancing a better understanding of Islam.

In the spirit of a modern day freedom movement, the 21st Century Wilberforce Initiative in Washington, D.C was founded as a new Christian human rights organization committed to empowering a global movement to advance religious freedom as a universal right. Elijah Brown, executive vice president, presented at the conference and reminded evangelicals of the responsibility to reflect more deeply on the Scriptures to see the image of God in all people in order to "counter the voices that promote fear of Islam, and model a new way forward by building relationships with those in our community who adhere to other faiths."

It seems there is a growing movement of evangelicals and institutions committed to a new way forward: loving our Muslim neighbors rather than being compelled by hatred.

*Corrections:
An earlier version of this article listed former Senator Frank Wolf as a co-founder of the 21st Century Wilberforce Initiative. He is in fact a Senior Distinguished Fellow and not a co-founder.

The Dialogue institute was both a co-convener and the host for this event.