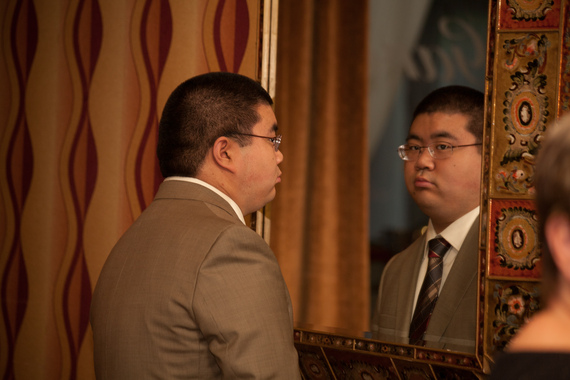 With my Christmas tree standing proudly in the living room, presents wrapped underneath just waiting to be opened, and my pajama-wearing cat weaving in and out of my legs begging for a wedding-ring-adorned nuzzle from my hand, it's not hard to be grateful during the holidays. But making a list of my favorite things leaves one item near the top that needs a little explanation, and that's my relationship with Zak.

I've had the privilege of knowing Zak now for 18 years. He's a pretty amazing guy, truly. His tastes are many and varied. He loves trains, tractor pulls, classical music, Star Wars

I don't really know a lot about autism, to be honest. But I know Zak, and that's the person I want to tell you about, this one boy, in a small farm town in upstate New York, who chose me more than a decade ago, and who I find myself holding onto all these years later.

I had never had any meaningful experience with a person who was autistic, not really. I had volunteered with the Knights of Columbus to help out with the annual ARC Christmas party for families with mental and physical disabilities. It made me nervous. I couldn't predict what people would do, or say, or need. And I really needed that kind of control, or at least more clear expectations of behavior, to feel comfortable. I was always happy to leave.

In high school, my best friend asked if I could babysit her younger brother Zak one day while she and her family would be out. Nothing scares a high school boy, so of course I said yes.

I wasn't sure what to expect from my interactions with Zak, didn't know how we'd fill our few hours together. His parents told me that Zak was pretty self-sufficient, they just mostly wanted me to be there with him. Money was left for Chinese food, and off they went. Zip zip zip, gone too fast with my adolescent unexposed heart pounding in my chest.

I have heard it said that there is comfort in repetition for those with autism. The truth in that became very clear within the first hour of my time with Zak. After watching Zak intentionally pilot his pod racer over a cliff in Naboo, hearing Qui-Gon Jinn yell "Anakin, nooooo!" and watching Zak restart the video game level for the 200th time, I had grown frustrated.

All I wanted to do was watch the Devils game. We may have lived in upstate NY, but the heart wants what the heart wants, and mine wanted red and black hockey. I said to Zak, "Hey buddy, I know what you'd like to do, you'd like to watch this hockey game with me!" Zak tuned in for approximatel y four minutes of back and forth action, then walked back over to his computer to listen to Beethoven on his headphones. I was in the clear!

The night ended uneventfully. Between our first evening together and my high school graduation, we spent a bit more time together, babysitting here and there. I once ran with Zak on my back for four laps around his house, finishing my final lap sweating and breathless. Because he was just too darn cute for me to say no, even if he dwarfed me by more than four inches and 40 pounds.

What I came to understand about this boy was pretty amazing. There was no pretense with Zak, zero. When he wanted to be left alone, Zak would say "Anthony, I would like for you to stop talking to me now." When he was happy with you, you were lucky to see an index finger pointed at Zak's head, to hear him ask "Um Anthony, will you kiss me right here please?" The constraints of popular society, with its omni-present need to always say and do the right thing, didn't seem to apply. Zak was living a life that was authentic and honest to himself. When you treated Zak well, you were treated well in return. Love Zak, Zak will love you. That seemed too easy.

When I would call to check in on Zak, I was getting updates that left me excited and confused. It appeared that Zak had started to become a hockey fan. Hockey, inexplicably, would hold his interest for three hours. For Zak, that was unfathomable. Zak liked bursts of things, 15 minutes on the computer, 30 minutes on his Walkman, an isolated song lyric played on repeat.

Sure enough, the next time I visited with him, Zak told me the entire roster of the Ottawa Senators, as well as the lineup of their local affiliate in Binghamton. That's when I started noticing the jerseys. They started as just a pair of jerseys in Zak's bedroom, something for him to wear with his dad when they went to games in Binghamton. The collection soon grew to something...bigger. Game-used sticks, pucks, jerseys, foam fingers, Christmas ornaments. Zak had found an identity for himself. He was a hockey fan.

Zak's sister went to college in Boston, and they all went to a Senators/Bruins game together during a holiday in Boston. To no one's surprise, Zak wore his Senators jersey. Well, the temptation was too great for the folks at the Garden that night. They put Zak's road-team-emblazoned face on the big screen, for more than 17 thousand people to see. Like good home fans, they booed. And they booed.

And on that night, Zak felt like more of a Senators fan than he had ever felt in his life. It was an affirmation of everything he believed and knew to be true. "Dad if they are booing me, it is because I love those Ottawa Senators so much." 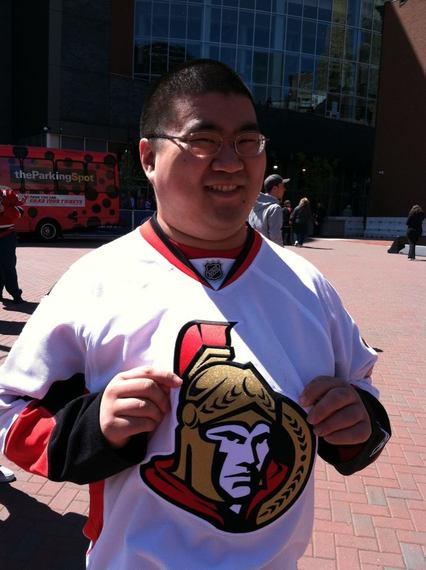 For Zak, going to a Senators game in Binghamton or Ottawa is so very similar and different than the experience that other fans have. Zak experiences and navigates the world through the lens of autism, something none of us can understand. But for him, hockey is the greatest equalizer. When he pulls his Senators jersey over his head and walks into the rink, he is just like everyone else. He gets high-fives, smiles, hugs, approval, validation.

When I talked with Zak about getting married to my husband, I watched him understand something new by grouping it with something familiar. "Ok Anthony, so if you marry Dominic, you will be married New Jersey Devils fan husbands?" Yes, that's right, Zak. That's exactly the way my heart wants to understand that, too.

I still don't really know anything of substance about autism. But I know everything I need to know about Zak. He loves me, and I love him right back. And that's enough.

So it's now, at Christmastime, that I remember the love that Zak shares with me, with his family, with the world. It is easy, it is effortless, it is simple. In Zak's heart, I'm on the same team as both the Ottawa Senators AND Senator Palpatine.

And even though I'm a Devils fan, I think I could do a lot worse, don't you? 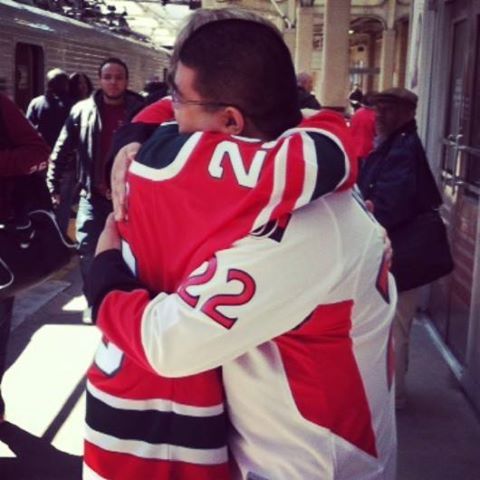