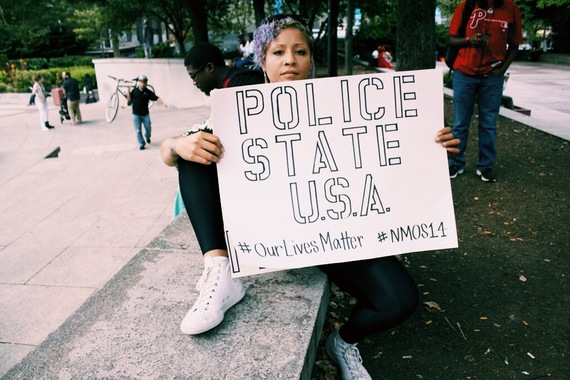 On August 14, the city of brotherly love gathered to pay homage to their lost brothers and I was utterly exhausted.

With the organizing prowess of Leslie MacFadyen, Philadelphia was taking part in a nationwide vigil and moment of silence (#NMOS14) launched by blogger and activist Feminista Jones to remember victims of police brutality.

Yet, all I could think was: Here we were, again. At a vigil, again. Sparked by the killing of an unarmed black teen, again.

My friends looked at me expectantly. Right. This was the part where I was supposed to be a journalist. I was supposed to interview, report, take pictures. I had a responsibility to document despite every inch of me wanting to break something or just break down.

I did what was expected of me. As I spoke to vigil attendees, I began to feel worn. How many times were we going to do this? I looked around at the crowd comprised of college students, parents and journalists. Lots of them, specifically black journalists. I wondered if they felt the same.

Mike Thomas, photojournalist for WURD , Pennsylvania's only black talk radio station, was covering the vigil and had similar feelings.

Thomas says he met four types of people at the vigil: those who wanted to end violence against black males, those who wanted better trained law enforcement, teens who were Mike Brown's age and could relate, and people who weren't black but felt what happened in Ferguson was an injustice for everyone.

For WURD radio host, Nick Taliaferro, black journalists are just as diverse in opinion and sentiment when it comes to Ferguson. 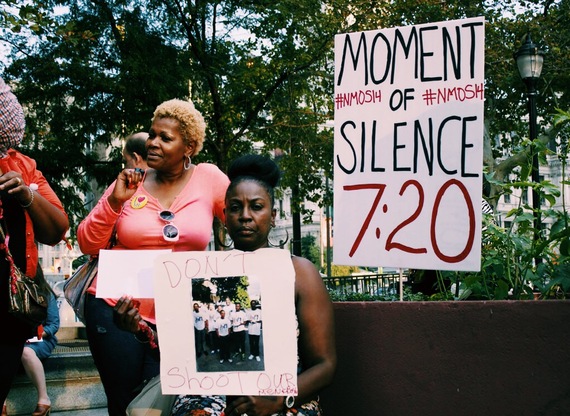 Layla Jones, web producer at Philly.com, says she's cried every day since Brown's killing and when events like Ferguson occur she's faced with a decision.

"There's a part of me that wants to help on the ground and be involved in rallies and committees and organizations," said Jones. "Then there's another part of me that feels I can reach more people if I stay personally distant from the on-the-ground efforts and just write about them."

Taliaferro, had former Mayor of Philadelphia, John Street travel to Ferguson to do live coverage and contacted St. Louis pastor Booker T. Rice for an interview so that listeners would not "be victims of soundbites."

"When one person commits a crime you can correct that by apprehending one person," said Taliaferro. "When a person commits a perversion and corruption of justice under the color of law that injures everybody not just Michael Brown."

Taliaferro doesn't deny there are issues within the black community and neither does Larry Miller, crime reporter for the Philadelphia Tribune.

"I always think, 'this looks like someone that I know'," said Miller, who has reported crime for 11 years. "I don't think any one human gets used to something like this."

Miller who was born and raised in West Philadelphia remembers being able to play in the streets without fear, now he argues that's not the case.He believes the black community must invest in family, faith based communities and legislation to try and enact change from the grassroots up.

"We need to realize that our most potent power lies in the electorate," said Miller. "We should take every opportunity to vote for our officials that are going to represent our interests." 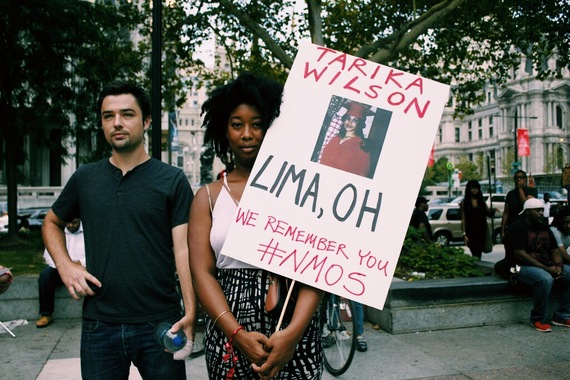 With Ferguson's Mayor James Knowles stating "there is not a racial divide in Ferguson," it's evident that there is a disconnect between Ferguson's officials and their residents. Yet thus far, diversifying government hasn't proven to be foolproof. Taliaferro feels that is what makes this generation angrier than ever and contributes to a sense of urgency.

"The difference now is the injustices against black bodies by people acting under the color of law is happening now with black people in positions of ultimate control," said Taliaferro.

Miller fears that once media coverage fades, Mike Brown will become another tragic footnote representative of the issues facing not only the black community but America. Professor of Journalism at Temple University, Karen M. Turner feels that in journalism there isn't enough follow-up reporting. Specifically, with recurring tragedies with racial implications.

"There's an opportunity that is constantly being missed for journalists to really put these issues in a context,"said Turner. "Now should be the time for journalists writing those stories to connect the dots between Trayvon Martin and Mike Brown."

Jones wrote an op-ed entitled, #IfTheyGunnedMeDown: How the Media Killed Mike Brown the article focused on the media portrayal of young black men and women and how it contributes to racial profiling. The piece discussed the hashtag #IfTheyGunnedMeDown that went viral on Twitter after Mike Brown's death, the hashtag highlighted that certain images used can vilify black and brown victims.

"When Michael Brown was shot I felt very helpless," said Jones. " Americans think black people make up the largest population of the poor, even though that's not true, just because of how the media portrays the poor. My #iftheygunnedmedown piece was a quest to figure out how it is that someone can gun down another human like that." 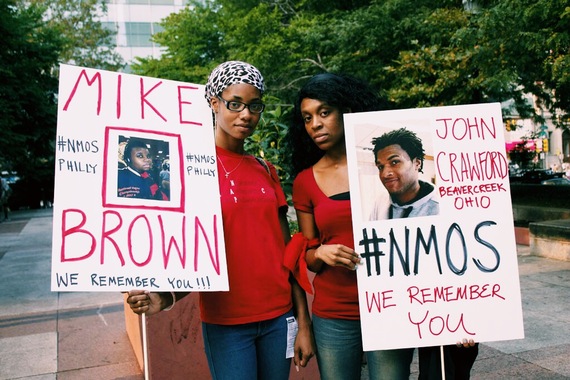 It seems there hasn't been this many black journalists on TV since Trayvon Martin and therein lies the problem. Diversity in the newsroom is not only a necessity but needs to be constant.

Online news outlet Quartz, published a piece entitled Why We Need Black Journalists To Cover Ferguson which focused on Buzzfeed journalist Joel Anderson, who tweeted the mistreatment he and others endured at the hand of the police in Ferguson.
They pointed their guns at him, yelled and even threatened to shoot.

In Anderson's piece "What It Was Like In The Streets on Ferguson's Worst Night," he stated:

"By now, no one cared that I was a member of the media. I was just a black man among hundreds of them. I looked at their faces, scanning for anyone I might know. Some of them had tattoos, or gold teeth, or extravagantly manicured beards. They reminded me of my cousins or friends that I lost touch with. I wondered what police saw when they looked these men in their faces? Did they bother to look them in their faces? I wondered if the police could tell any of us apart."

Black journalists see the unseen and put a mic to the unheard. They have the power to not only report the ramifications but to enact the preventative through awareness. Objectivity is still at their core and racial comprehension in their toolbox. That insight goes beyond being the other half of a CNN double-screen commentating on the killing of another black youth. Unfortunately, they are the only ones that offer this kind of insight. Diversity, alone, is no longer enough.

"I don't think we need to put that responsibility just on black journalists," said Turner. "We need to have other people in the newsroom saying 'let's revisit this.

Turner feels we need to change how we train journalists. All must be able to have this insight regardless of skin color but that will only happen with a dramatic change in how we discuss race in this country.

During the moment of silence, hands were raised in the air as symbolism for "Don't Shoot," fists were raised and lighters in the air for the fallen. MacFadyen recited 30 names out the hundreds of victims she was able to find. A task that was tragically easy. I asked a few people why they attended, despite the taste of restlessness in the air. 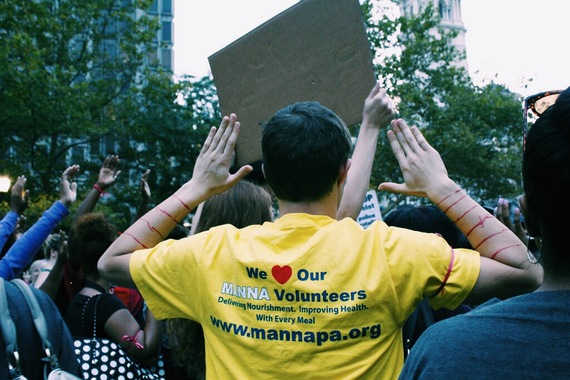 "I walk outside with the same fear that my dad had and his dad, and his dad had," Paul Washington, 25, said to his friend.

"I didn't know what else to do to show black men that I love them and value their lives," said Mizane Bowman, 22, as her reason for joining the vigil.

"We have to be extra compliant just to stay alive," said Emerson Evans, 28.

The vigil quickly turned into a protest. Some marched to the art museum as the rest marched in the opposite direction. As they began to chant," Don't touch our kids!" and "Justice for Mike Brown!" it began to rain. Strong winds began to push us all together as we sought refuge in City Hall's subway station. It was as though calling those names had ciphered a response.

Chants continued as the subway rumbled underneath, reminding me that there was a much bigger machine their voices were fighting against.

This piece is not meant to speak for all black journalists, but I can speak for myself.

Black bodies no longer hang from Poplar trees but from handcuffs. According to a Pew Research Center analysis, black men are more than six times as likely as their white counterparts to be incarcerated in federal and state prisons.

That's if they're lucky.

A report by the Malcolm X Grassroots Movement revealed every 28 hours a black person is killed by police, security guards or self-appointed vigilantes.

Protesters in Ferguson are not upset in spite of all the facts not being presented but they're upset because of the facts that are: Unarmed. 18-year-old. Killed. Officer. With impunity.

America has never been a melting pot but a boiling one. These issues have been bubbling up underneath the flaking crust of a "post-race" veneer. It's just that only some of us have the privilege of remaining totally oblivious to them and others are served the bitter slices of American pie.

Overt dialogue on what is occurring in our subconscious when it comes to race is vital and is quite literally a matter of life and death. Until individuals can see the link between prejudicial apps like SketchFactor and why Mike Brown, Trayvon Martin and John Crawford were deemed threats there will never be justice. There will never be peace.

The pot is bubbling and one day it will boil over. It is unfortunate that it took the death of a young man, to uncover it.

After more than four hours in the sweltering heat, they threw a white sheet over the lifeless body of Mike Brown. He had become no more than a remnant of food you spat out of your mouth at a restaurant, or the bones you couldn't chew but neatly wrapped in a napkin so no one would see it.

On the train, I saw a woman with her son, he looked to be about two years old. She laughed as he played with her cheeks and kissed her nose. She tickled his belly as his giggles drew attention from the entire train car. I smiled. This boy is the center of her entire earth, but my smile faltered as I remembered there would be people who deemed him unfit to walk it.

I just pray they don't shoot. 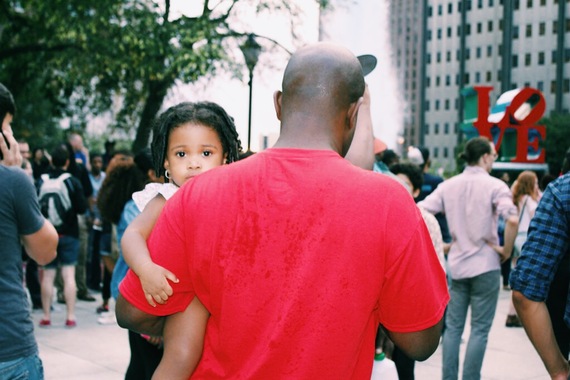