Last week, a colleague said, "The Flint water crisis is a crime against humanity." I was taken aback. This is a serious charge, but when the Rev. Jesse Jackson declared that the entire city of Flint was a "crime scene," I thought again. Then, when I learned that officials gave bottled water to government employees in Flint, more than a year before they admitted that Flint River water was dissolving lead pipes into tap water, how else can it be understood except as a premeditated crime?

I was a pastor in Los Angles in the 1980s and 1990s when government officials dragged their feet on AIDS medicines and research. I know what it is to lose loved ones due to official foot dragging and the bureaucratic blame game.

Michigan was also once my home. Early in my ministry, I served the Metropolitan Community Church in Detroit, and I helped a small group of people to start their own MCC church in Flint. Today, both MCC congregations in Flint and Detroit are impacted by this catastrophe. We care about what happens to our members, everyone's children, and everybody!

People who live in Flint do not deserve to be poisoned. 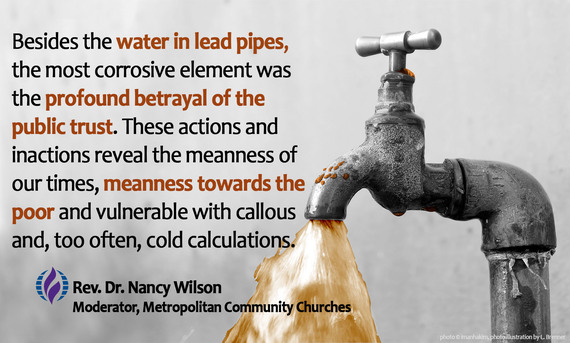 Flint is a city that is burdened with a decimated industrial economy, a diminishing tax base, failing schools, and the usual systemic poverty profile for a city with a 60% Black and Hispanic population.

"In 2013, the Flint city council voted [for] ... a new system that would pump water from Lake Huron. But Flint couldn't connect until 2016, so the city, operating under the control of emergency managers appointed by Michigan Gov. Rick Snyder (R), opted to save money by using the Flint River in the meantime," said Huffington Post senior reporter, Arthur Delaney.

Poor people, people of color and their children, were literally "sold down the river," by those whose greed and callousness made their lives cheap and dispensable. As a minister of the Gospel, I am reminded that Jesus said, "Inasmuch as you did it to the least of these, you did it to me." In effect, they poisoned Jesus, and the children, the little ones, whom Jesus loves, in Flint.

The New York Times noted that, by April of 2014, complaints were coming from residents about dirty water, rashes, and illness. The city then issued a press statement saying, "Flint water is safe to drink." In fact, the acidic polluted river water was dissolving lead pipes, and the lead level in children was surging. Simultaneously, more than once during the summer, city officials urged residents to boil their water due to high bacteria count.

CNN reported that EPA staff tested tap water in homes over a 6-month period. They were supposed to take 100 samples but only took 71; only 69 made it to the report. The other two samples were apparently so high that they would have tipped the whole study into the bracket of actionable levels of lead--and there was no money to take action.

What happened was immoral, criminal, and a human rights violation.

In September of 2015, Dr. Mona Hanna-Attisha and other Flint doctors went public with the high levels of lead in the blood of children, but state officials still said the water was safe, and accused the doctors of using lead levels as a "political football" in a blame game against the state.

Days later, the governor was briefed on lead levels, city officials told residents not to drink unfiltered water, and by October 1, the city was hooked back up to Detroit water. By this time, the lead pipe linings were deteriorated, so they still were leaching lead. Finally, the Department of Environmental Quality reported that staff used "inappropriate protocols" for corrosion control.

Besides the water in the lead pipes, the most corrosive element was the profound betrayal of the public trust. These actions and inactions reveal the meanness of our times, meanness towards the poor and vulnerable with callous and, too often, cold calculations.

The mayor who oversaw this was voted out of office in November and replaced by Mayor Karen Weaver. In a few short months, she and others laid out the real extent of the poisoning. In January 2016, Mayor Weaver worked with President Obama to have Flint declared a disaster area, which allowed FEMA to pour in $15 million to a city that has been a dumping ground for generations.

The situation in Flint is just one of the many tragedies of environmental injustice--and specifically environmental racism, where communities of poor people and people of color are the preferred sites for industrial dumping.

Back In 1992, Flint citizens protested emissions from power plants, cement plants, asphalt plants and other industries. This pollution was only possible after centuries of slavery, Jim Crow, White flight, and Black ghettos dehumanized whole swaths of people. Industry dumped lead-based paints, chemicals, and industrial toxins, and then abandoned their waste sites for the government to clean up. Concentrated pollution has a deeply racial geography.

"The single greatest determinant of where certain kinds of toxic sources are located, like hazardous waste facilities, is race, and yet [the EPA has] never once made a finding of discrimination, and they very rarely use any of the other tools at their disposal to push states or localities or private actors to change their behavior," said Marianne Engelman Lado, an Earthjustice attorney who is suing the EPA on behalf of Flint and four other communities whose civil rights complaints have been ignored.

This is an old festering boil on our collective body. The situation in Flint ripped off a putrefying bandage to reveal corruption that is far more than skin deep. Can we save the patient? We are all in toxic shock!

In my tradition, there are many stories of Jesus healing people from lifelong illnesses and even raising people from the dead. I am not arguing that everyone should turn to Jesus, but how about we start with everyone repenting from the sin of polluting our garden, poisoning our own children, and pouring acid into our rivers, streams, lakes and oceans?

Is it too late? Can we stop? I believe the planet can heal, even if the children of Flint do not ever fully recover. From this harm, even Jesus cannot save us.