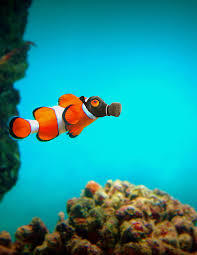 Dory is a forgetful fish. That's the quirky defining quality of the blue tang that stars in Disney/Pixar's Finding Dory, which had the biggest opening weekend ever for an animated film. Dory can't remember anything for more than 10 seconds, not until recalling old memories of her parents in captivity starts her journey and ours.

Dory's amnesia is funny, and it's played for laughs by actress Ellen DeGeneres. But in real life, there's a darker story about royal blue tangs (the kind of fish that Dory is) and other tropical fish caught for the international aquarium trade. More than half of the 12 million fish imported annually into the United States are caught using cyanide poisoning that stuns them for easy capture but kills and injures millions of nearby fish and the corals they depend on.

As Finding Dory approached its June 17 release, some news articles warned people not to buy blue tangs, which must be caught wild and are notoriously difficult to keep healthy in a standard saltwater aquarium. It was an important message given how Finding Nemo created a huge demand for clownfish in 2003.

But the true horrors of the tropical aquarium trade go way beyond the momentary popularity of any particular species. Cyanide fishing in the Philippines, Indonesia, and other countries that export tropical fish kills about two fish for every one that survives to be sold in the U.S. - and even the survivors are likely to be unhealthy and die early. The cyanide squirted onto reefs also kills the corals and contributes to coral bleaching.

Earlier this year, environmental groups filed a legal petition to ban imports of wild fish captured using deadly cyanide. At least half of aquarium fish imported into the United States have been caught with cyanide, and the environmental damage is devastating, as detailed in the report: "Poisoned Waters: How Cyanide Fish and the Aquarium Trade are Devastating Coral Reefs and Tropical Fish."

Ironically, both Finding Dory and Finding Nemo tell stories that revolve around the main characters or their family members escaping from aquariums. They yearn to be reunited with their family or swim free in their Great Barrier Reef communities rather than be ogled at in aquariums in a dentist's office or research center. So it's strange that so many young moviegoers and their families would want to keep their very own Nemo or Dory.

I get that these are movie characters and this is the entertainment industry. And yet, there I can't help but feel there's an important moment here to highlight the truly sad story of how these lovable tropical fish are captured for the international aquarium trade - drugged by a lethal poison that leaves millions of fellow fish floating dead among ghostly white corals - then this issue might finally get the attention it deserves.

Cyanide fishing is a grim reality that we'd rather forget, yet it's one we can't continue to ignore.