In a remote corner of Pennsylvania, an ambitious 10-year-old is nearing the midpoint of a unique personal journey. As the rest of us rang in the New Year, L.R.C. (his parents don't like him using his real name) pitched the tent he got for Christmas and resolved to sleep in his backyard every night for a year.

When I learned of L.R.C., I thought he offered compelling insight as a case study of "Environmental Identity" in today's youth. Let's face it--most kids prefer screen time to sleeping outside in thunderstorms and frigid temperatures. I sat down with the Kid in the Tent to learn more about the "what" and "why" of his adventure.

L.R.C. is a quiet kid, but that reserved nature belies his determination and acceptance of all that goes along with logging serious time outdoors. As we walked to his tent, pitched on the border between his backyard and 35 rolling acres of Christmas trees, I stood under my umbrella and out of the steady rain. L.R.C. pulled back the fly to show me his temporary home, utterly unfazed by the precipitation. That was when I knew this was bigger than just one kid and his New Year's resolution. 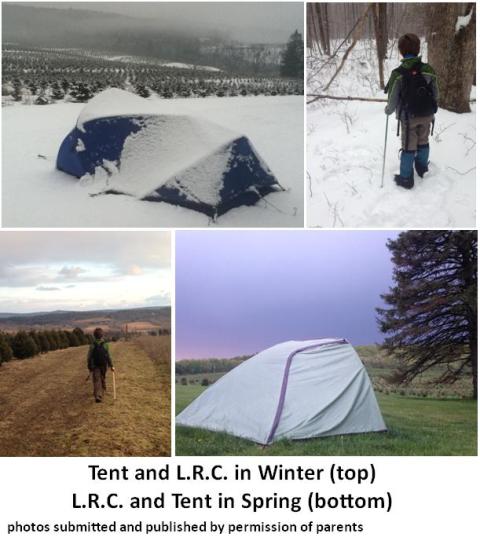 Dr. Susan Clayton, a Professor of Psychology and Environmental Studies at Wooster College, is a leading authority in the emerging field of Environmental Identity, assessing the ways we develop connections to the natural world.

As we solidify that connection, Dr. Clayton asserts, we develop a deeper sense of self. Not surprisingly, research seems to show that the correlation is a positive one.

"People who have a sense of connectedness to nature are happier," Dr. Clayton says. "You may also have stronger self-esteem. Maybe because you feel like you belong in the world, you feel better about yourself."

I ask L.R.C. perhaps the most important question: why?

"It's a lot of fun," He says simply. "At first it was a challenge. I camped out on December 26th in a big snowstorm and it was exciting. That was when I decided to camp out for a week starting the first day of the New Year."

"During my first week in the tent, I decided to go for a month. Then, since that wasn't as hard as I thought it would be, I decided to make it a year."

After his parents recovered from the shock of their son's revelation, they encouraged him to blog about the experience. His first blog entry, "It's Cold!" went live on January 23. More than 100 posts and 13,000 hits from dozens of countries later, L.R.C. says he has no plans to pack up his tent.

As an ordinary 10-year-old sleeping alone, though, he has to confront his own fears and anxieties. I ask him what spooks him late at night.

"Sounds, mostly," he says. "At first, things like the howl of a coyote would freak me out. Now, they're kind of cool when I hear them." Another time, it was a phantom conversation on his walkie-talkie. "I woke up when my receiver picked up a voice at 2:30 a.m., and it wasn't my dad's. That was kind of scary."

Even if he doesn't realize it, he is also engaged in real-world science--a process of observation, inquiry, and conclusion. In one of his blog entries, L.R.C. talks about hiking with his dad and little bother to the pond near their house. "When we got there we noticed a long, wormlike creature/plant in a big puddle by the pond. My dad and I estimated that if you stretched it out it would be 15-20 feet long. My dad put his hiking stick underneath it and picked part of it up. We noticed that there were tiny beadlike things inside it." ("Night 118", Tuesday, April 30). In later blog entries, he discovers that the beads are tiny eggs that hatch into tadpoles.

"The tadpoles are a great example of seeing how things interact when you spend time outdoors," says Dr. Clayton. "If he'd done that in a class, he might have learned the same lesson, but he would have perceived it as work. On an evolutionary scale, it was important for us to learn [how things interact in the natural world], so we may find these things intrinsically more fascinating. When you're not outside, you may find a loss of that knowledge."

That kind of determination, particularly in light of the single-digit temperatures he endured last winter, made me wonder what keeps him going.

"It's important to recognize that there's a social context," says Dr. Clayton. "He has peer support, parental support, and online support. It has social significance (for him) as well as the personal significance. [In most cases], the child is not just doing it on his or her own."

Dr. Clayton stresses this need for family interaction, pointing out that as adults we can help to build a sense of Environmental Identity in children, encouraging them to play, learn, and grow in nature.

If you're ready to join L.R.C., even just for one night, you have the perfect excuse. The National Wildlife Federation is encouraging Americans to spend a night outdoors this Saturday. Whether it's your own child, a niece, a nephew, or someone who needs the support and encouragement of an adult, it couldn't be easier to give it a try. Set up a tent or just bivouac under the stars. You will be joining people across the country in helping to build stronger self-esteem and promote happiness in today's youth. 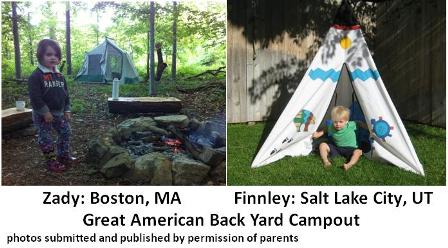