A recent Washington Post article indicated that if the Fox News Channel had not existed, then-Vice President Al Gore would have gotten 1.3 percent more of the national presidential vote in 2000, and the publication implied that this could have changed the election's outcome. (As of this writing, the article says 1.6 percent, but I confirmed with the study's authors that it's actually 1.3.) If you're shocked that a media organization could change election outcomes, relax -- a closer look at what we know about voting behavior reveals it isn't very likely.

The report is based on evidence in a working paper by Emory University professor Gregory Martin and Stanford University professor Ali Yurukoglu that shows the potential for cable networks to influence voting behavior. Their results show watching Fox News does make some people more likely to say they will vote Republican, and watching MSNBC leads to similar statements on the Democratic side.

Whether cable news networks can affect how people vote is a complicated question. Many people choose to watch a cable news network based on pre-existing beliefs, which means people watching Fox News are already likely to vote Republican and those watching MSNBC are likely to be established Democratic voters. So, those who watch it unintentionally are probably most likely to be influenced by the content. To figure out who those viewers are, Martin and Yurukoglu looked at cable channel placement.

Cable channels were assigned somewhat randomly as cable companies developed and more networks emerged in the 1990s. Fox News and MSNBC launched during this time and were assigned different channel numbers by different providers, seemingly without reason. The authors compared cable subscribers to satellite subscribers, since satellite providers use the same channel setup nationally, to establish that these channel assignments were not based on what local viewers wanted. Fox News was not given a more convenient channel placement in more conservative areas, and MSNBC was not favored in more liberal areas.

Since channel placement was not dependent on viewers' preferences, any change in how often viewers watch Fox News or MSNBC when they typically would not watch the networks could be attributed to how easy it is to get to that channel. Research shows that lower numbers are more easily accessed and more often watched than higher numbers. This relationship allows the authors to evaluate whether watching Fox News or MSNBC affects the opinions of those who unintentionally watch the networks.

The authors conducted analyses for the 2000, 2004 and 2008 elections to estimate how different the national Republican vote share would have been if Fox News did not exist and people weren't randomly drawn into watching it by low cable channel numbers. The same analysis was conducted for MSNBC in 2008 -- the network reformatted to be more explicitly liberal in 2005 and did not have a pro-Democratic effect in 2000 or 2004. 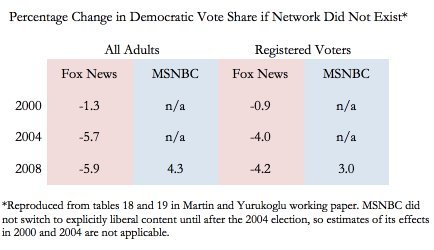 Those analyses found that if Fox News had not existed in 2000, the Republican vote would have dropped by 1.3 percentage points. However, when we consider what research shows about elections and voting, it's not likely that Fox News changed that outcome. Republican vote share was determined by how likely people were to say they would vote for the Republican candidate in two large political surveys. These surveys included all adults, even those who are not registered to vote. It is very difficult to determine whether survey respondents actually voted, but a substantial number say they will vote, then don't do it.

When the analysis is restricted to only registered voters, Fox News increased the Republican vote share by 0.9 percentage points. But there are still 10-15 percent of registered voters who do not vote.

Survey research can tell us quite a bit about these people who don't vote. They are the same people as those who are likely to be swayed by accidentally watching a cable news network for a few minutes: those without strong attachments to party, ideology, or candidates, and those who are generally disinterested in or disenchanted with politics. It's likely most of the people in that 0.9 percent whose preferences were affected by Fox News did not actually vote.

The impact of unintentionally watching Fox News increased in 2004 and 2008, but by 2008 MSNBC had a similar effect on vote intentions in the opposite direction. If Fox News did not exist in 2008, Republicans would have had 4.2 percent lower support among registered voters. The absence of MSNBC would have hurt Democratic support by 3 percent, leaving a net Fox News gain of 1.2 percentage points for Republicans -- not much more than in 2000. And it's still very likely that the indecisive people making up that 1.2 percent would not vote.

This is not to say the findings are irrelevant -- in fact, I think the work is very important. The authors have made an impressive step forward in demonstrating how cable news networks affect political views and in demonstrating that the potential to affect views seems to be getting stronger. But it's important not to get ahead of the evidence by claiming election outcomes are influenced. When these findings are put in context with what we know about voting behavior, the likelihood that Fox News or MSNBC would alter an election outcome is very small.