STRASBOURG, France, June 5 (Reuters) - The European Court of Human Rights on Friday allowed France to take a man in a coma off life support, in a case that has torn a family apart and could influence the extent to which euthanasia is endorsed by law across the continent.

The European court, noting that 38-year-old Lambert had been declared in a minimally conscious state and last year deemed vegetative, ruled that French law was sufficiently clear and there was no infringement of the Article 2 clause on the right to life in the European Convention of Human Rights.

The legal battle pitched Lambert's parents and two of his siblings against five other siblings and Lambert's wife Rachel.

The drama and the public debate surrounding it recalled the 15-year legal battle in the Terri Schiavo case in the United States that ended when her feeding tube was removed in 2005.

"This is a scandal," Lambert's mother Viviane said of the European ruling. "We will keep fighting." Jerome Triomphe, one of her lawyers, called the verdict "a dark day" for thousands of people in similar situations across Europe.

Lambert's parents say there are signs that Lambert may have some consciousness while his wife Rachel says it was clear he would never have wanted to live in the condition he has been in since the 2008 car crash.

She won a ruling last June for doctors to effectively end her husband's life and Lambert's medical team was set to turn off feeding and hydration equipment before his parents secured an injunction.

After Friday's verdict, Rachel Lambert said simply she was "overwhelmed" and needed to time to digest the news, adding: I am thinking very dearly of my husband today."

The Strasbourg court ruled that there was "no consensus among the Council of Europe member states in favor of permitting the withdrawal of life-sustaining treatment," and that states could therefore exercise discretion.

France's legislation and the procedures followed by doctors and the court were thus not out of line with the convention.

Few countries in the world explicitly permit euthanasia or assisted suicide, but a French law passed in 2005 allows for removal of artificial life support in certain cases after strict procedures.

Further legislation going through parliament stops short of euthanasia but would allow doctors to implement a terminally ill patient's request to be put into a "deep sleep" until death.

The 47 member countries of the Council of Europe must ensure their laws respect the European Convention of Human Rights, a pact established in the wake of World War Two. (Reporting by Gilbert Reilhac and Brian Love; Editing by Tom Heneghan) 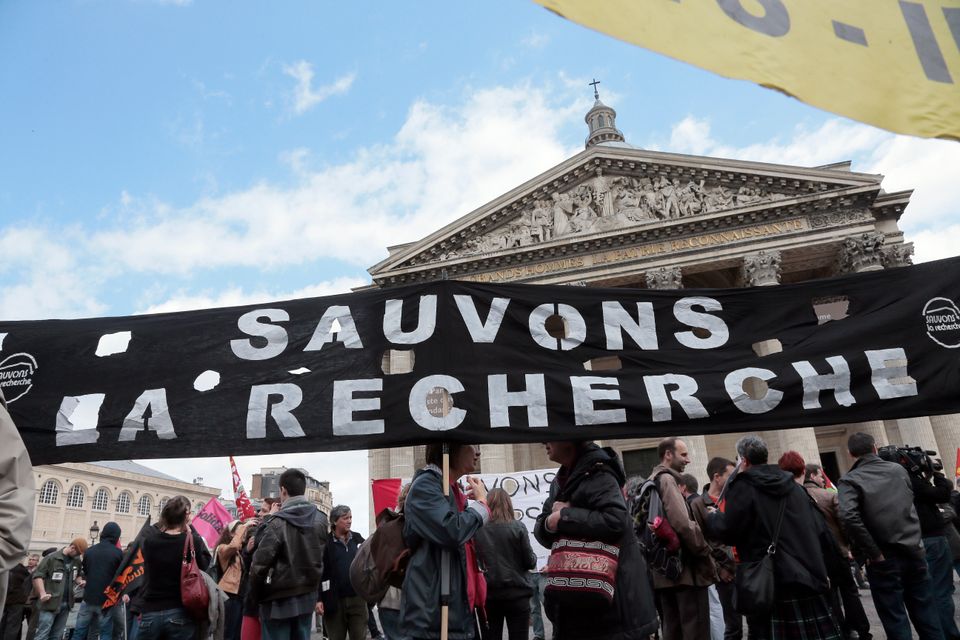 1 / 7
Demonstrators hold a banner reading 'Let's save research' at the Pantheon square on May 22, 2013 in Paris, during a protest against a draft law by the French government for higher education. France's lower house will start debating a proposal on May 22 to introduce more courses in English at universities, amid a storm of controversy in a nation fiercely protective of its identity. (JACQUES DEMARTHON/AFP/Getty Images)
Getty Images